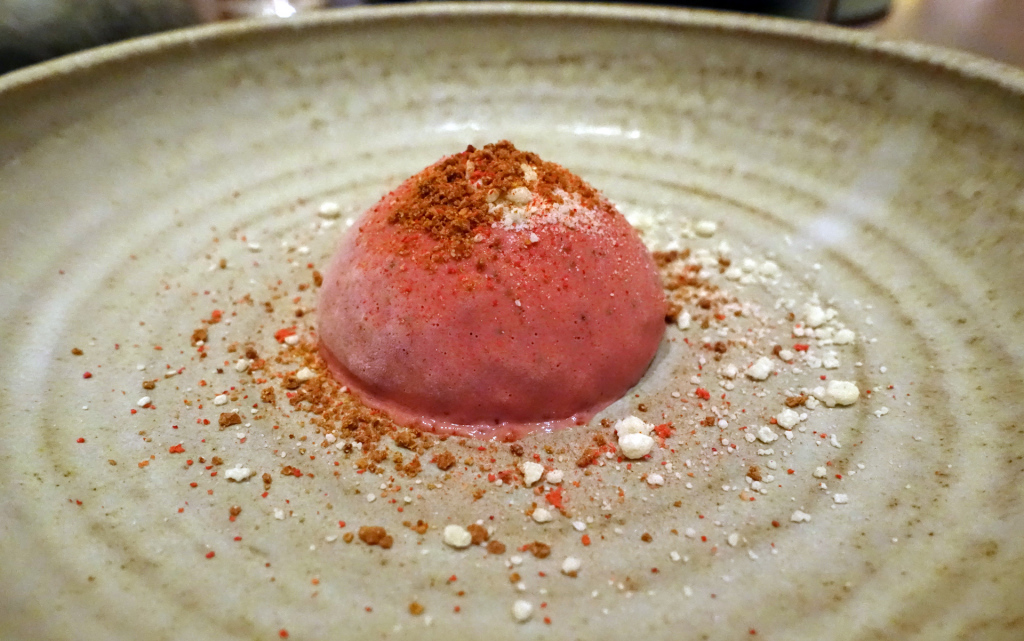 After reading a few reviews I was really excited to try Fera – Simon Rogan’s London venture within Claridge’s.  As you might expect, the restaurant’s name (which means wild in Latin) is a reflection of the concept – Fera uses a lot of high quality, natural, seasonal ingredients. The abundance of vegetables and edible flowers weaved through the menu meant it took some persuading to get the boy there but a couple of weekends ago we settled in for a Friday night tasting menu.

We started with a few snacks.

The deliciously peppery cherry Belle radishes, with ramsons and vinegar stood out for me. Tasty natural simplicity. 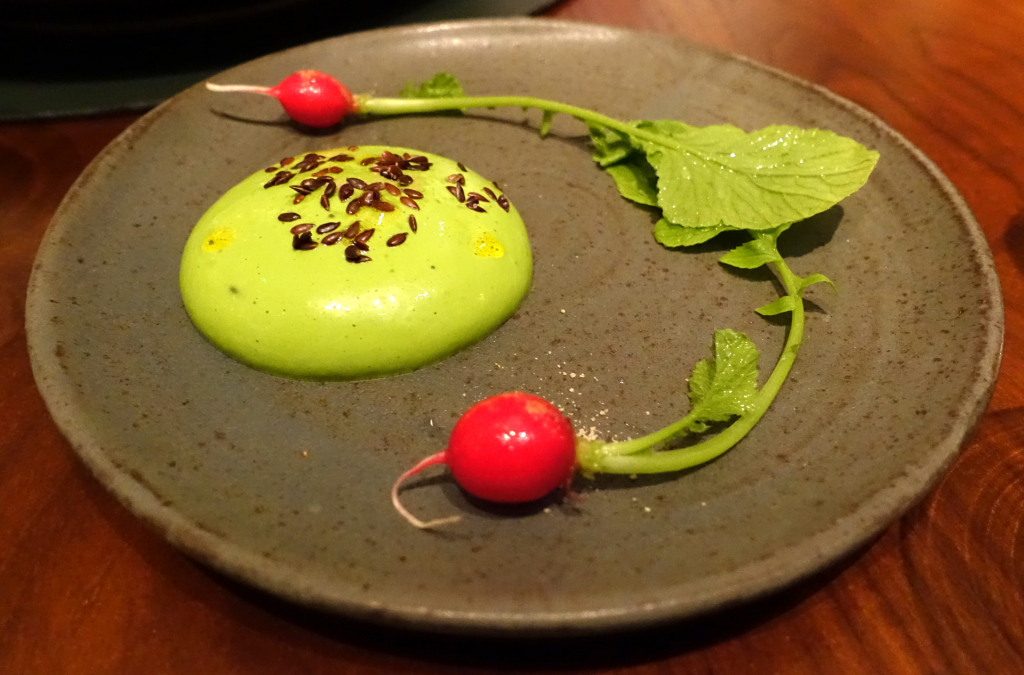 And that vibrant green sauce made me feel practically virtuous (an unusual feeling when embarking on a tasting menu with wine pairing!)

I don’t think that the golden yolk with razor clams can go unmentioned. 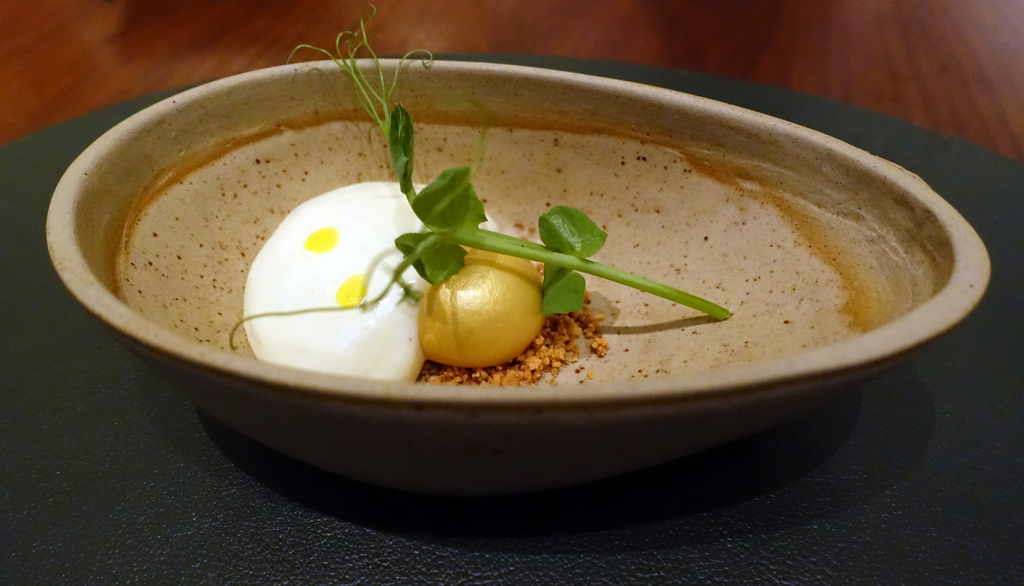 Not only did the beautiful golden yolk remind me of the fairytales of my childhood but the intense flavour also evoked happy memories of Sunday boiled eggs and soilders. I did feel, however, that the richness of the yolk completely overpowered the razor clams.

Our first of the bigger dishes was Aynsome soup, mustard, smoked eel, soft herbs and flowers. 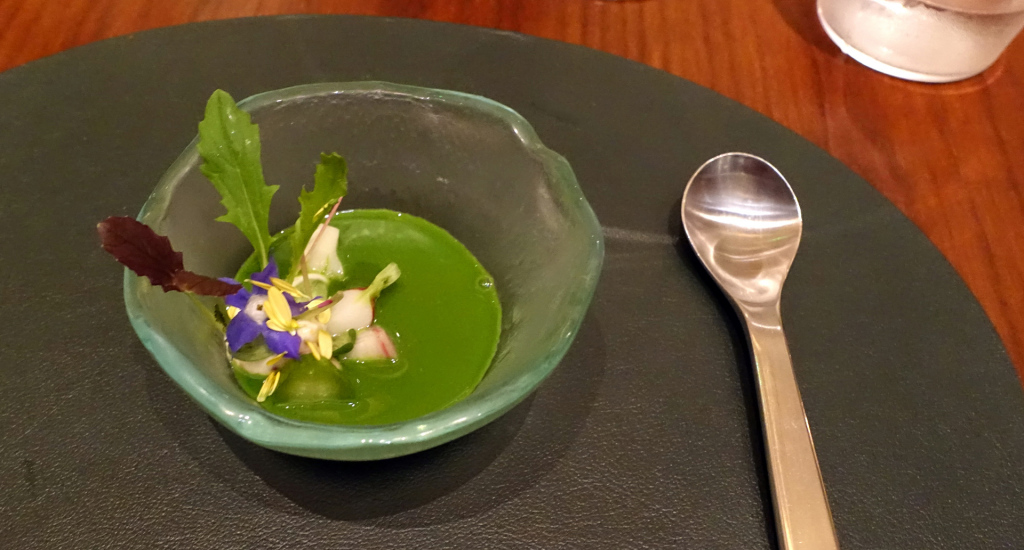 The soup (made with wild watercress, rocket, spinach and potatoes) was wonderfully fresh tasting and velvety in texture. And just as you were sad it was coming to an end you reached the succulent eel resting at the bottom of the bowl.

The next dish of scallops, turnips, anise, sunflower shoots and horseradish was probably one of my favourites. 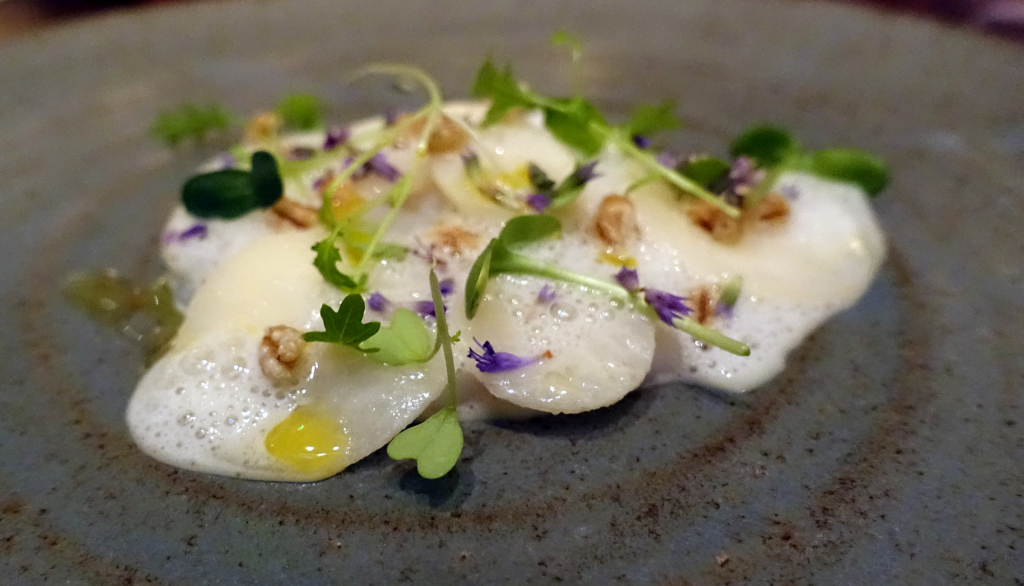 The anise and horseradish perfectly complimented the scallops rather than overpowering it, and the scallops themselves were so sweet and fresh..

Not being the greatest dairy fan, I swapped the curd for salt cod mousse, chicken skin and cod’s roe. 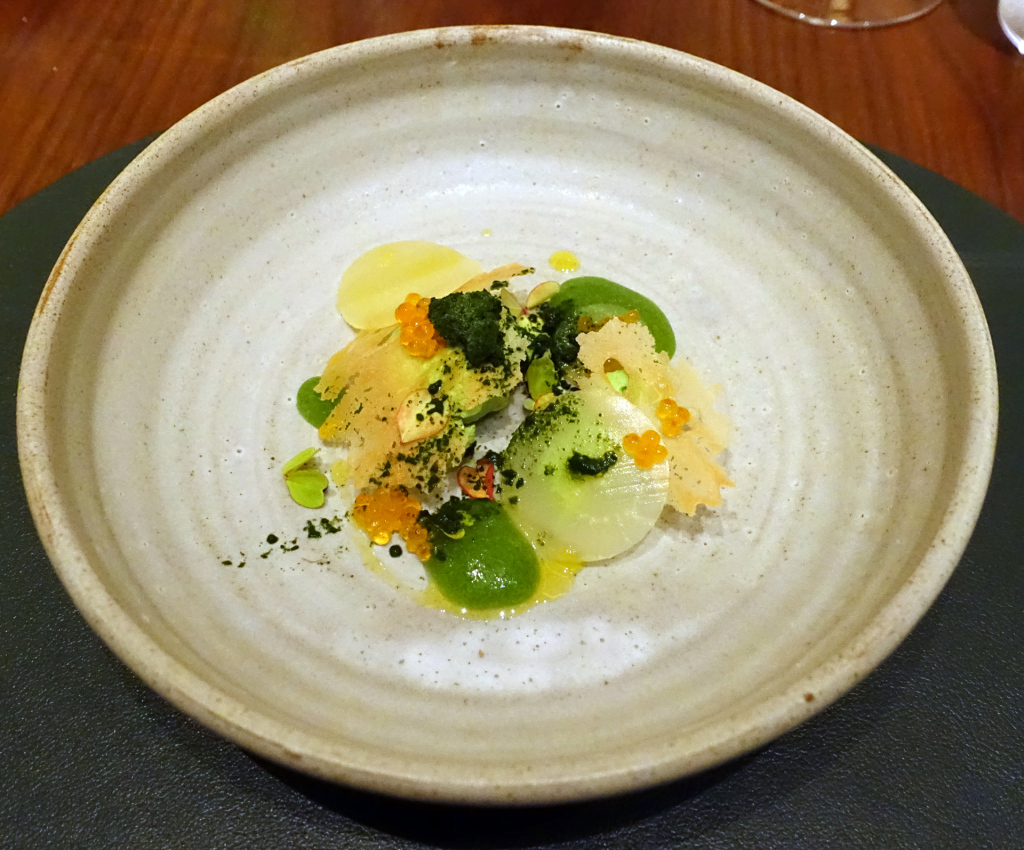 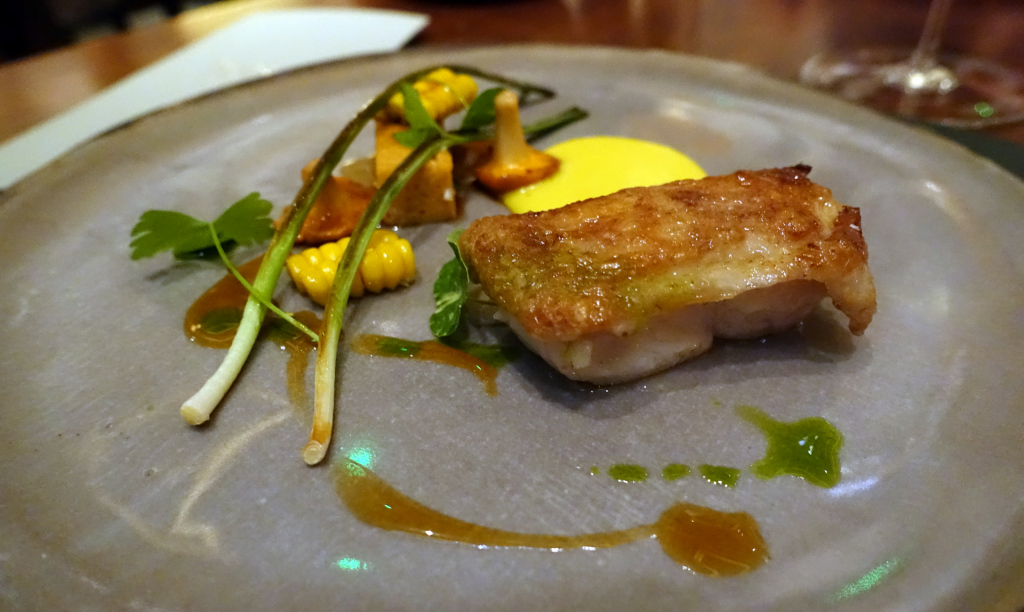 An original idea but the ‘chick’ part of the dish just wasn’t crispy enough which, once again, let it down.  This dish was served with an orange wine.  I’ve heard a lot about orange wine (white wine grapes which have spent some time n contact with the grape skins giving it that distinctive slightly tango-ed hue) this summer but I’m not sure I was convinced by my first tasting. Does anyone have any particular recommendations which might sway me? 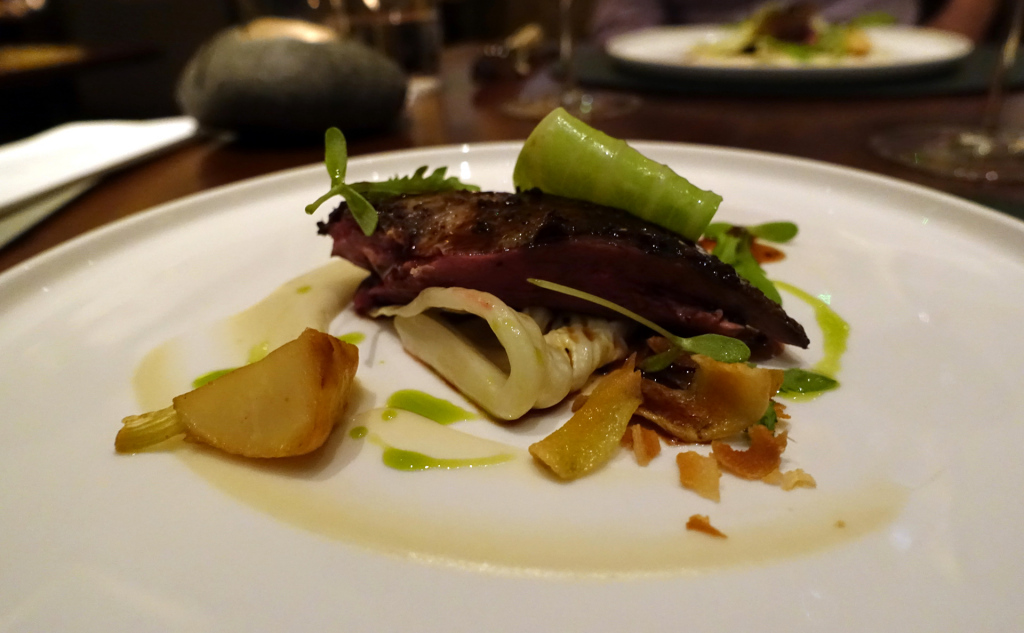 This was well-cooked but not particularly memorable.  The wine the sommelier served with it an exceptional chateau neuf de pape which I am desperately trying to remember the name of as it definitely needs to go on my shopping list.

The first dessert of pineapple weed ice cream with a butterscotch foam, celery and cacao tuile.  This was a good palate cleanser but I’m not sure I was 100% on board with the strong celery flavour which permeated. 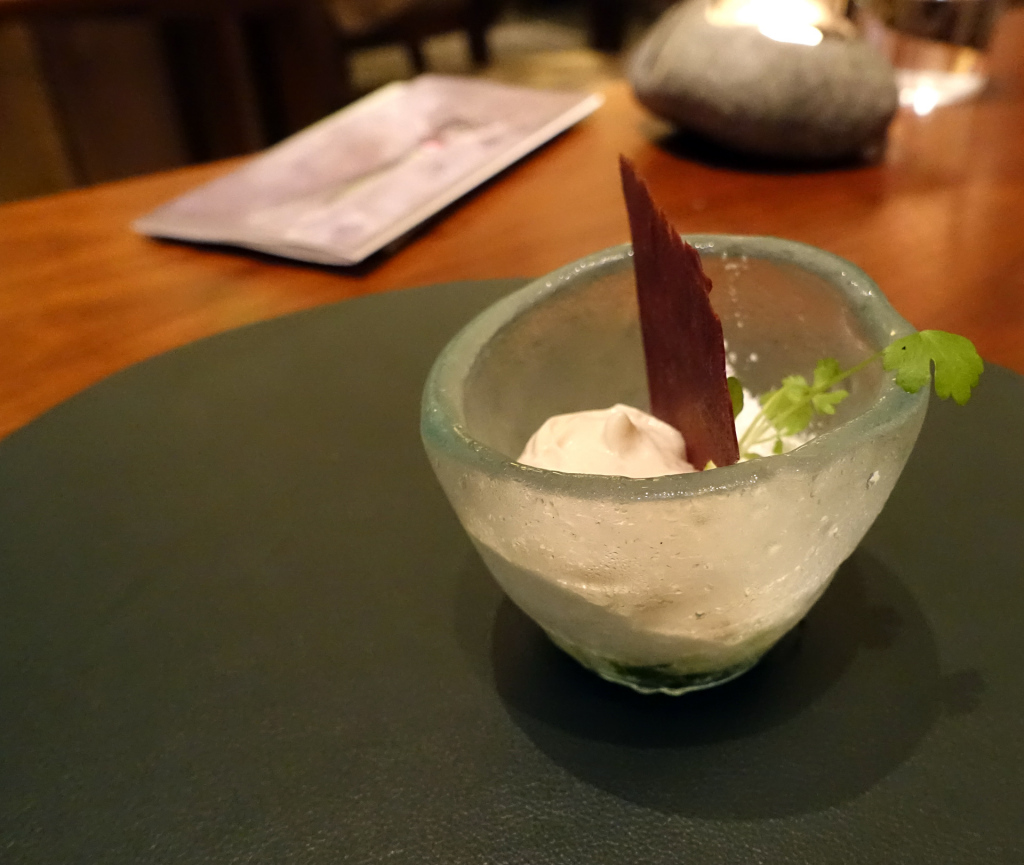 I much preferred the Hereford strawberries with meadowsweet and linseeds. 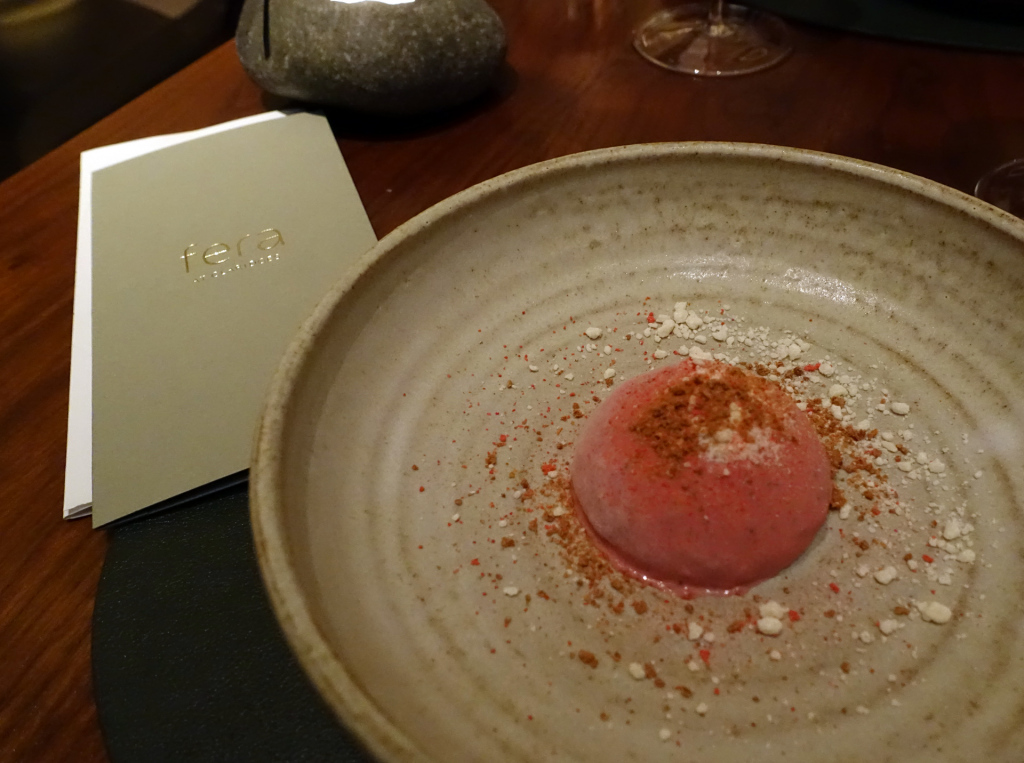 I found this so pleasant to look at I was almost loathe to eat it.  But breaking through the sweet outside shell to reveal the woodruff cream and marinated strawberries inside was particularly satisfying.

The final dessert of black saison, blueberries and fennel had a good balance of flavours but I was a bit disappointed by the fact that the main focus of the dish was yet another creamy consistency. 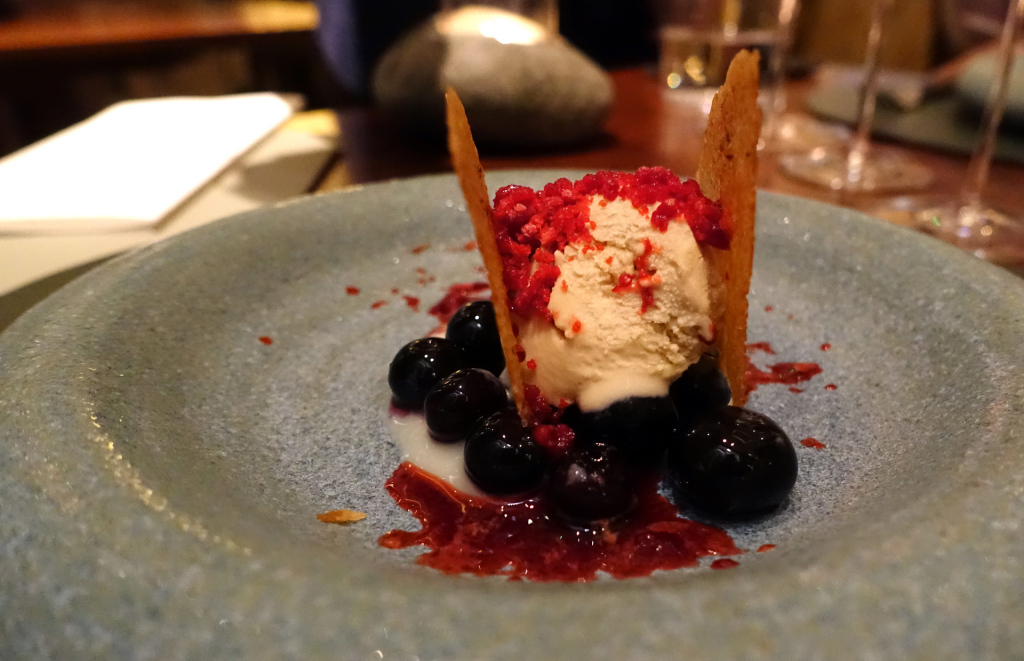 While I imagine the succession of puddings was as it was because of the focus on the dishes being as natural as possible, I would have been much more satisfied with a pudding which displayed another technique/texture – a cake/tart etc.

An original mixture of petit fours rounded off the meal: 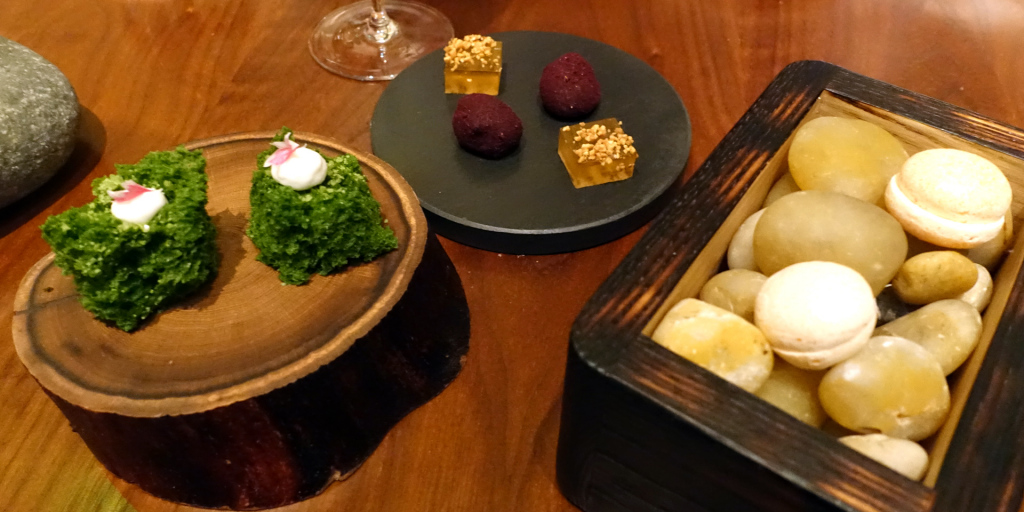 The opulent art deco surroundings of Fera were truly spectacular and the service friendly. However I’m sad to say that despite being beautiful to behold the food itself, while just didn’t wow me to the extent I’d expected it to. In the week or so since we went to Fera it has been awarded it’s first Michelin star so perhaps we were just there on an off night or have other’s had this experience?