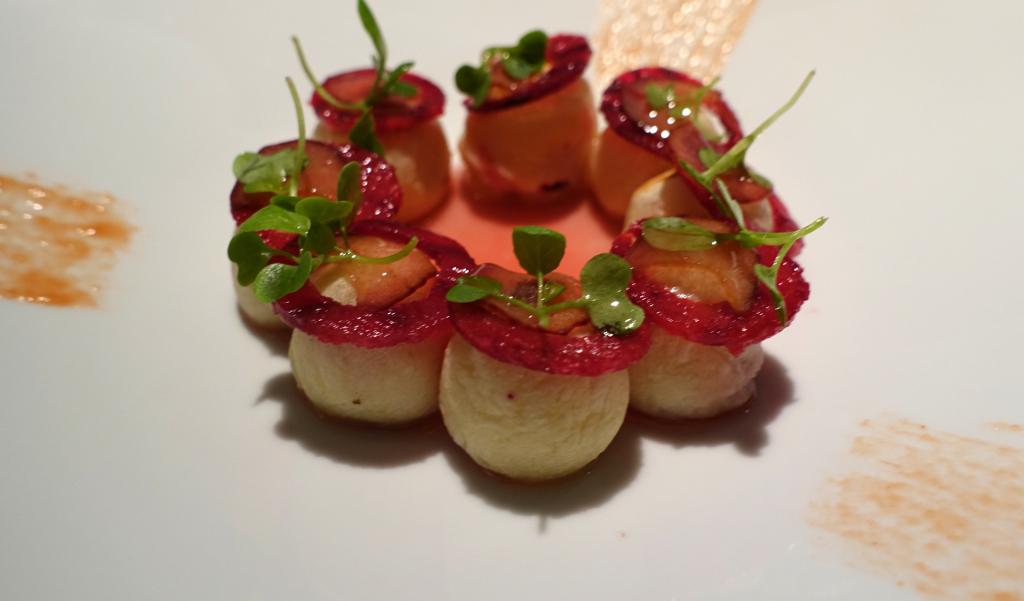 Madrid boasts a very high concentration of Michelin star restaurants and we thought it would be rude not to sample at least one of them on our girly weekend.  We opted for the two star Sergi Arola Gastro as it’s website offered an inventive, tasty looking and very reasonably priced lunch menu.

The first thing we noticed when we entered the restaurant was the interesting decor.  Reflecting Gastro’s philosophy that everything should be hand made, natural and personal there was a living wall, the softest leather table cloths and beautiful crockery by Bernardaud.

The second thing we noticed was the silence which was pretty oppressive.  I’m not sure if it was just the crowd that happened to be there that lunchtime but it definitely detracted from our meal – we felt very aware that even normal conversation was likely to be overheard by the whole restaurant.

That said, after a glass of cava or two (which the waiters were very generous in topping up – perhaps because they had intuited our discomfort) we relaxed and chatted as normal.

We were given a number of snacks to start…first up false orange caviar, olive, red vermouth foam and gin orange. 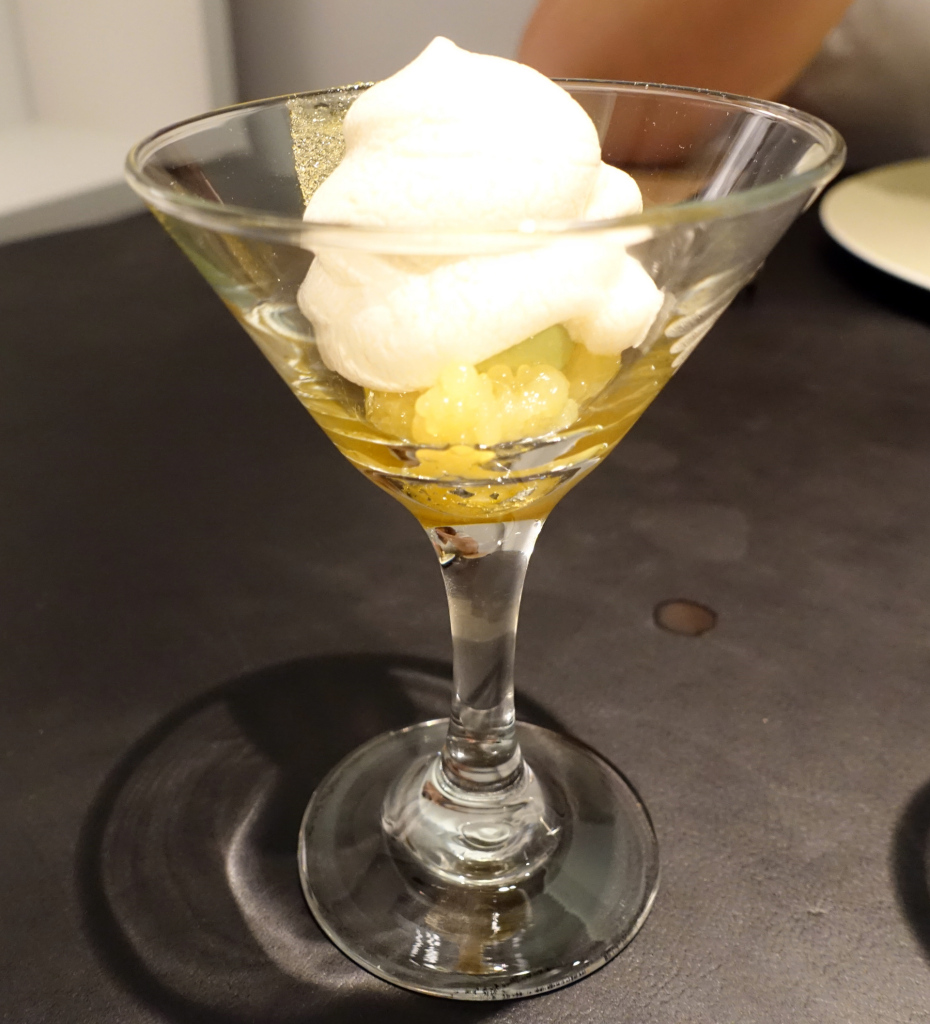 The jury was out on this one, but I for one thought it was a great way to start things off and was excited by the inventive flair it demonstrated.

Next up we were given a delicious morsel of Spanish omelette and anchovy mousse encased between two sugar crisps. 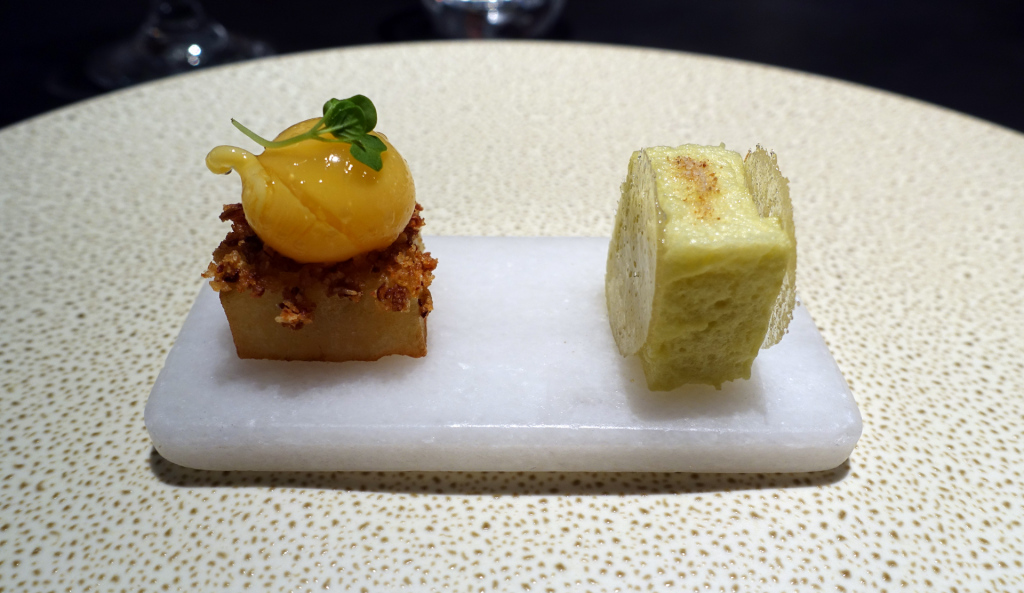 The tortilla was melt in the mouth and just gooey enough but the mousse was less of  success – the fishy/sweet combination just didn’t work for me.

To round off the snacks we were each presented with four mini chips with garlic mayonnaise.

Adorable and delicious in equal measure.

The bread basked followed – the all important test for me – and the bread they served was phenomenal. 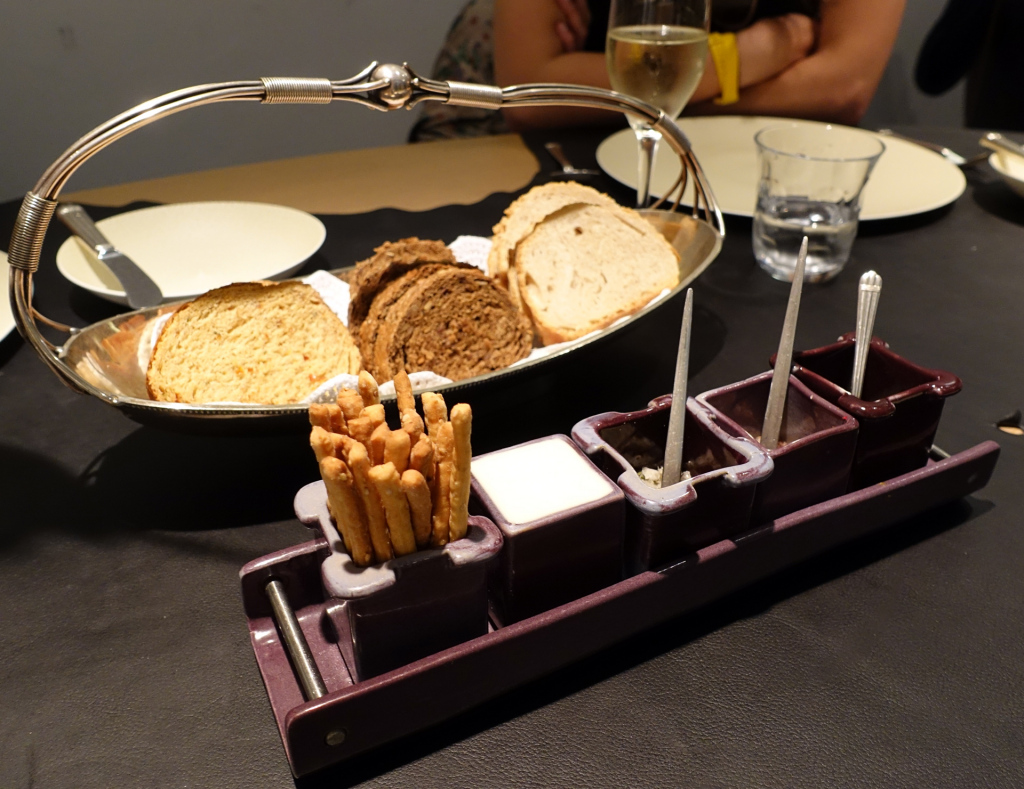 So far so good…

I started with the “Gnoquis” stuffed with beetroot, rhubarb jelly and wild brotes, which were so beautifully presented. 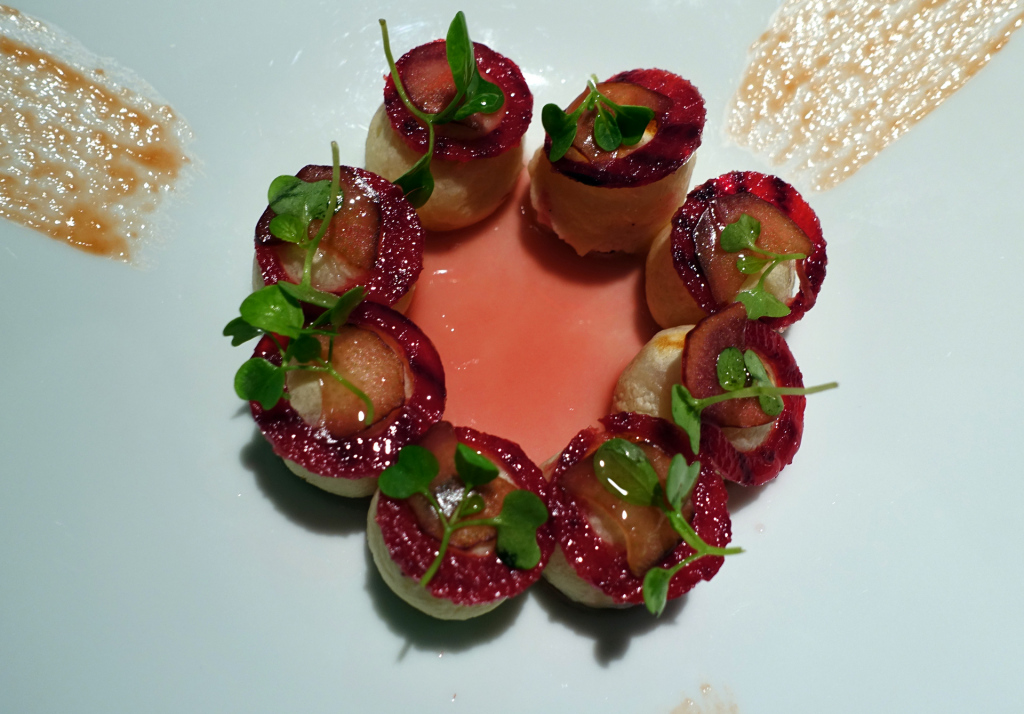 These were tasty but for me there wasn’t enough of the rhubarb jelly to cut through the doughiness of the gnoquis. I love a dough ball (the Pizza Express variety in particular) but they do need something to balance them out and this dish sadly fell a bit short.

For my main I chose the False “black rice” with red mullet, fried sea cucumber, sea snails and codium seaweed. The components which formed the base of this dish were delicious… 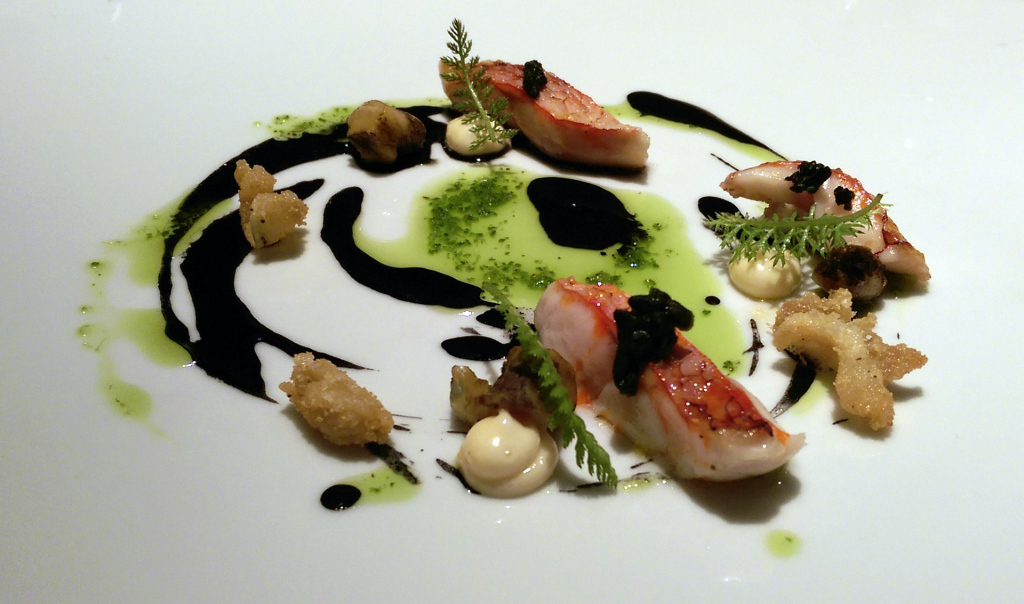 However the black rice (actually made from pasta and squid ink) which was generously piled on top was very salty and heavy, detracting somewhat from the deliciousness underneath.

For pudding I had the “Vulcano” a cocoa cupola, orange coulis, rose pepper truffles, fruits of the forest and vanilla fume.  This pudding certainly offered theatrics and style…. 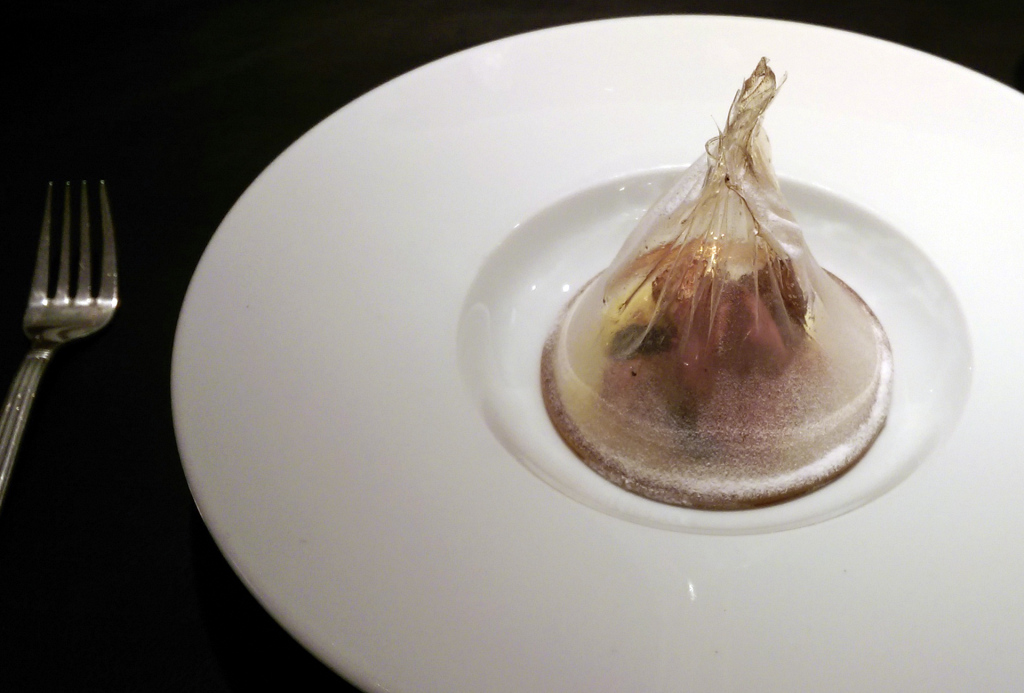 Sadly I wasn’t quite quick enough with the camera to capture the vanilla smoke. 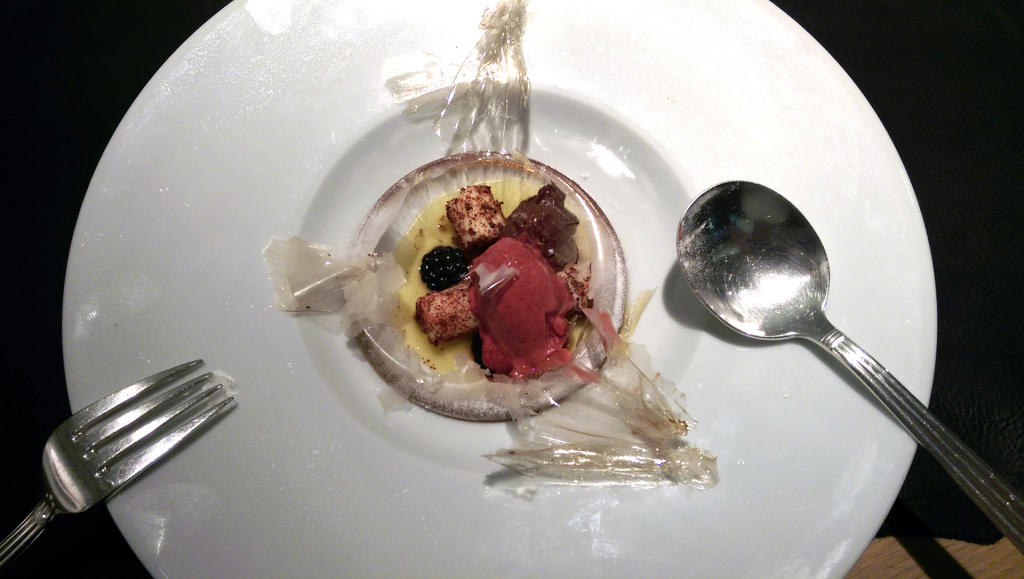 I was hoping for a chocolatey explosion but was left a bit wanting and I had some serious food jealousy of my friend’s “Citrus” pudding.

Sergi Arola Gastro certainly served up some inventive food and there were moments of brilliance but I have to say it didn’t really meet the standards I have come to expect of a two Michelin star restaurant.  That said, I wouldn’t be surprised if the atmosphere in the restaurant, which is probably more suitable for a romantic meal a deux, had slightly knocked my taste-buds off.