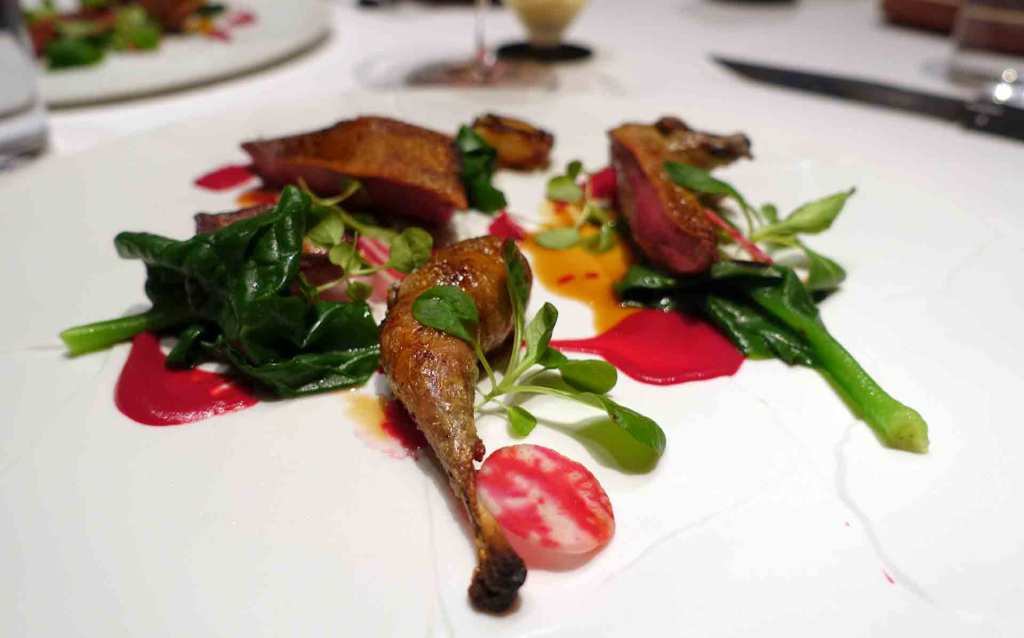 While we were in Tokyo last autumn we were lucky enough to eat not only at Quintessence but also at Tirpse – a restaurant set up by an ex sous chef of Quintessence, Terada-san, and occupying its old location in Shirokanadei. And somewhat controversially, I think I actually preferred my meal at the latter…
Tirpse was awarded a Michelin star within two months of opening its doors in September 2013 – at that point, the fastest that a star had ever been awarded to a restaurant. The day we went a typhoon was blowing outside but once we got to the restaurant it was service as usual…smooth, friendly and in an elegant but casual setting.
We started with onion crisp, onion mousse with a touch of earl grey tea flavouring. 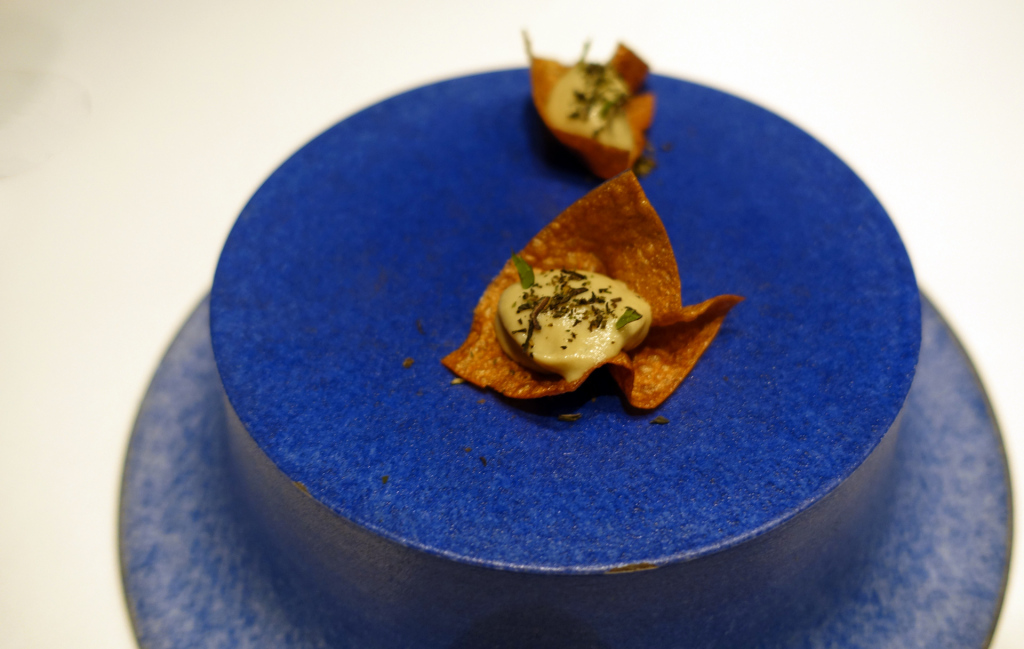 I was a bit worried that if too punchy that I would be left tasting onion over all other flavours for the rest of the meal, but luckily this was really delicately flavoured and delicious.
The next small dish was pineapple cake with sea salt and brown butter caramel. 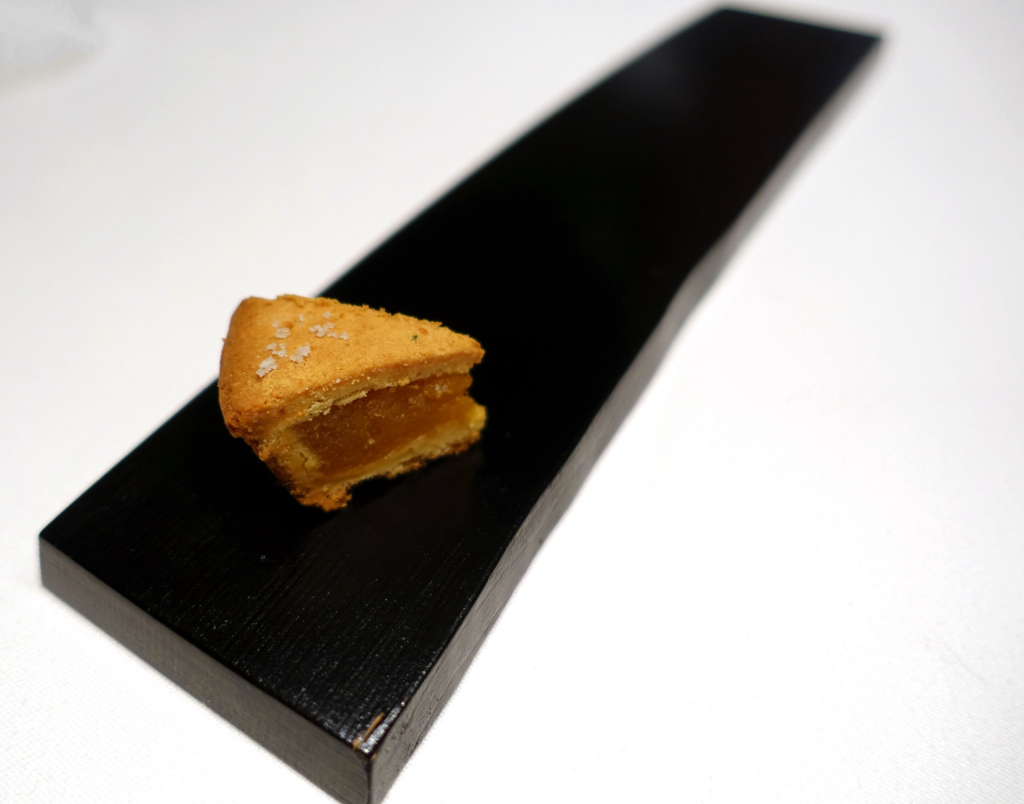 Not a dish you would usually expect at the start of a meal, but it worked really well – the pastry was melt in the mouth and the balance of sweet and salt just right. I could happily have eaten a lot more but I’m glad they kept it to a bite sized portion so that I didn’t spoil my appetite for what was to come.
Smoked wanna with aubergine puree, yogurt, figs, tomato, hazelnuts and autumn leaves followed. 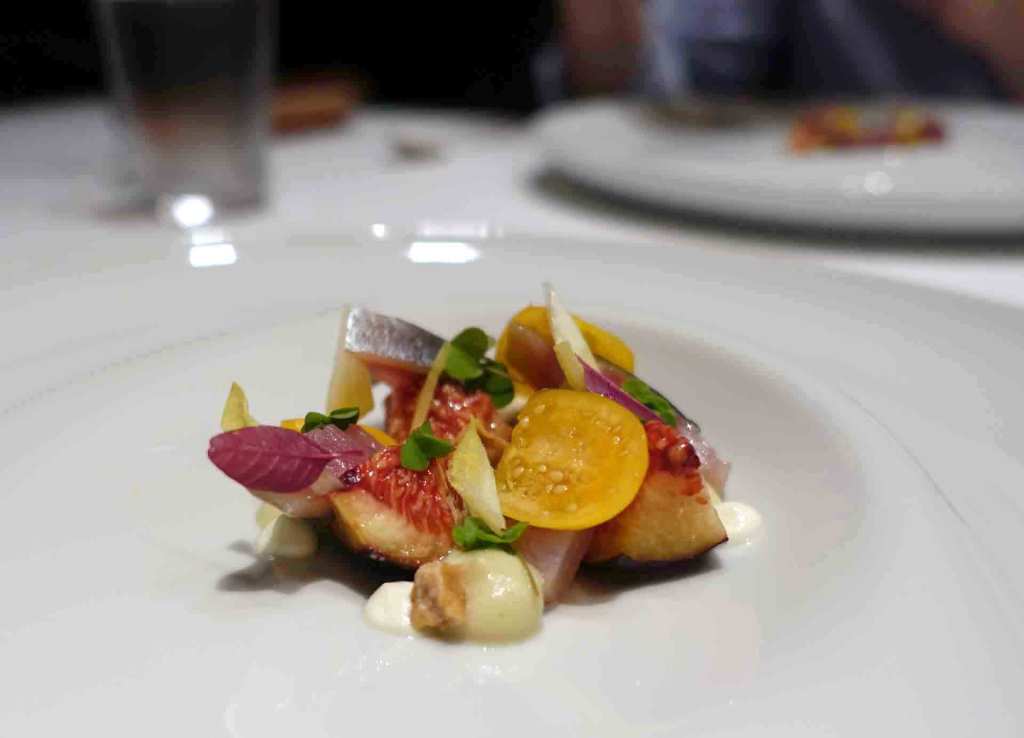 A riot of colours, flavours and textures on a plate. Everything worked really well together but the tomatoes were particularly fresh and flavoursome and the addition of the hazelnut added a really satisfying crunch.
Next up was sauteed squid with white bean puree, black pudding puree and French mushrooms. 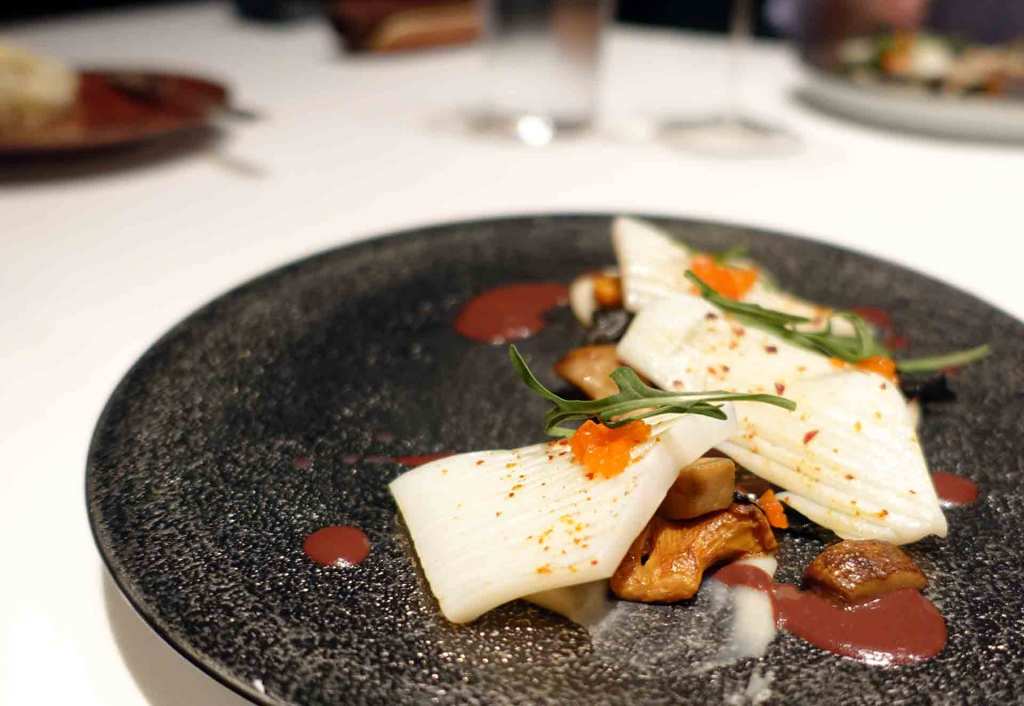 This was probably the stand out dish of the meal. I’m not usually one for black pudding (in fact I usually avoid dishes with it in when I seem them on a menu) but I have to admit that in this case it added real depth, flavour and seasoning to the dish, without overpowering the delicate, perfectly cooked squid.  Perhaps I will have to be more adventurous in the future…
The last of the fish dishes was menuke from Hokkaido (which is part of the scorpion fish family). This was served with fried artichoke, fennel and tsubagai (or whelk). 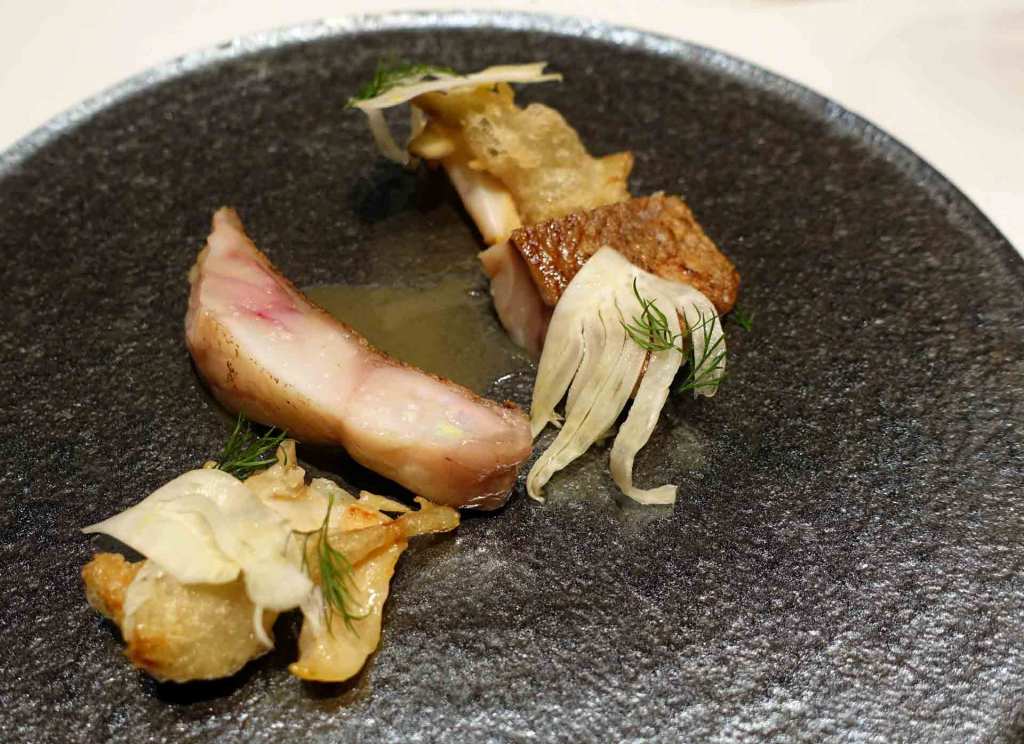 Perhaps not the most eloquent of criticisms, but this dish was just a little too fishy for my liking. I’ve not had menuke before, however, so this may just be the nature of the fish rather than any reflection on the kitchen (given the quality of the food during our meal I suspect the former). That said, the fish had a good crispy skin and was well cooked.
For our meat dish we were served pigeon with beetroot and spinach. 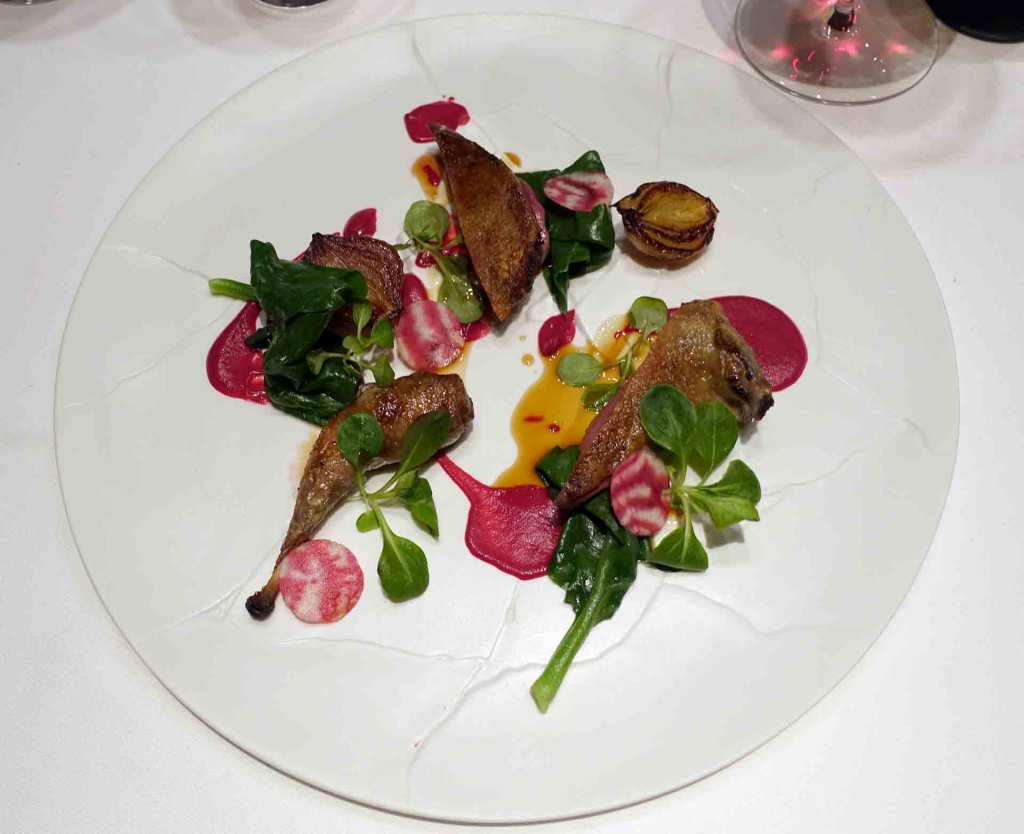 I loved the earthy, sweetness added by the beetroot sauces and the freshness of the spinach and felt they counter-balanced the rich, meaty flavour of the pigeon really well.
Alongside the main course, we were served bread from a local bakery which was so good that we sought the bakery out after our meal to stock up on bread for the next morning’s breakfast.
Our first pudding was grape with grape jelly, grape jam and grape sorbet. 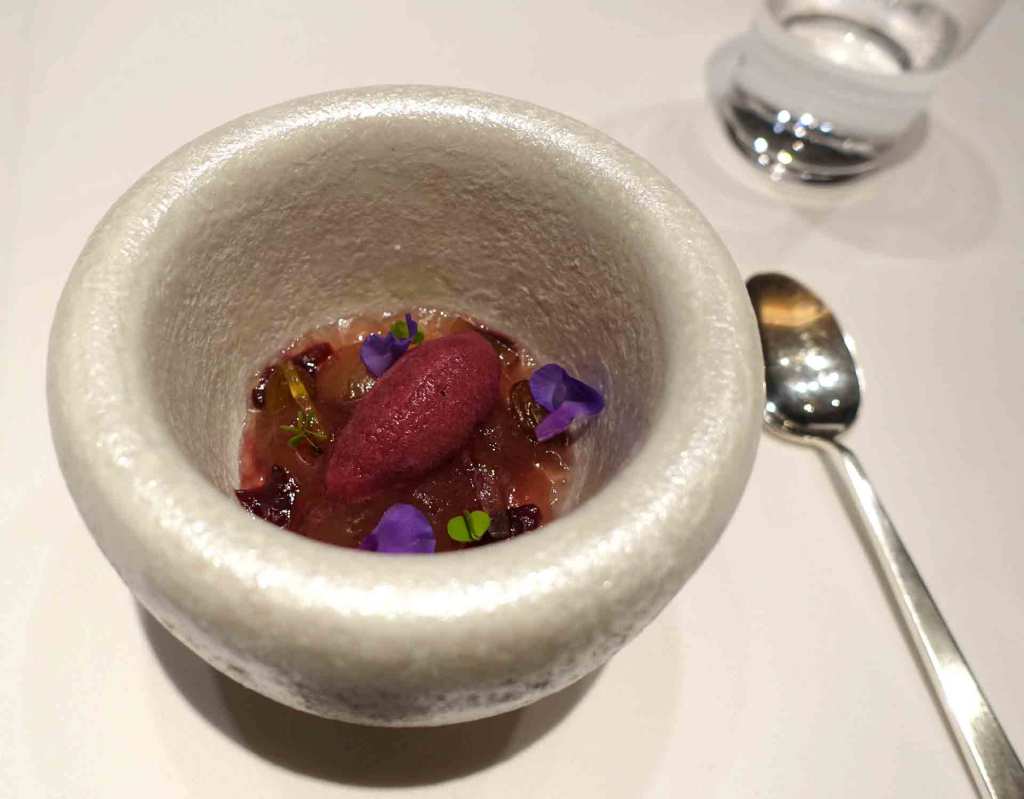 This was unbelievably refreshing. And despite the dish essentially being made up of one ingredient each different incarnation of the grape seemed to have a totally unique flavour.
For our second dessert we had chocolate Mont blanc with pear, chestnut and caramel ice cream. 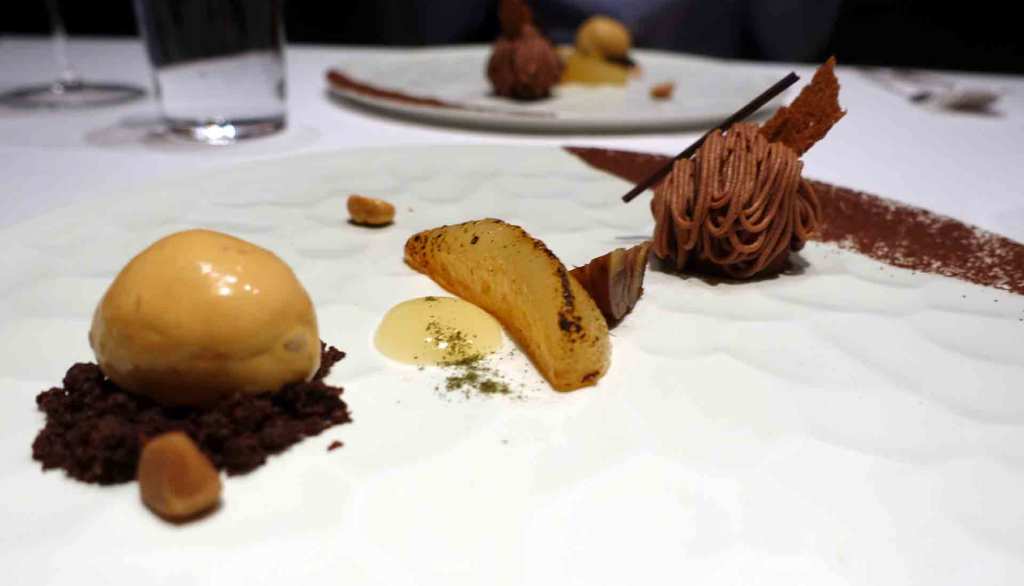 This was incredibly rich. I have a slightly hazy memory but I think that the chocolate flavour was so intense that I was (almost) tempted to leave some on the plate…luckily the perfectly poached pear was there to provide a little lightness. The chestnuts (which were in season when we visited) were also delicious.
And to round off the meal some very generous petit fours… 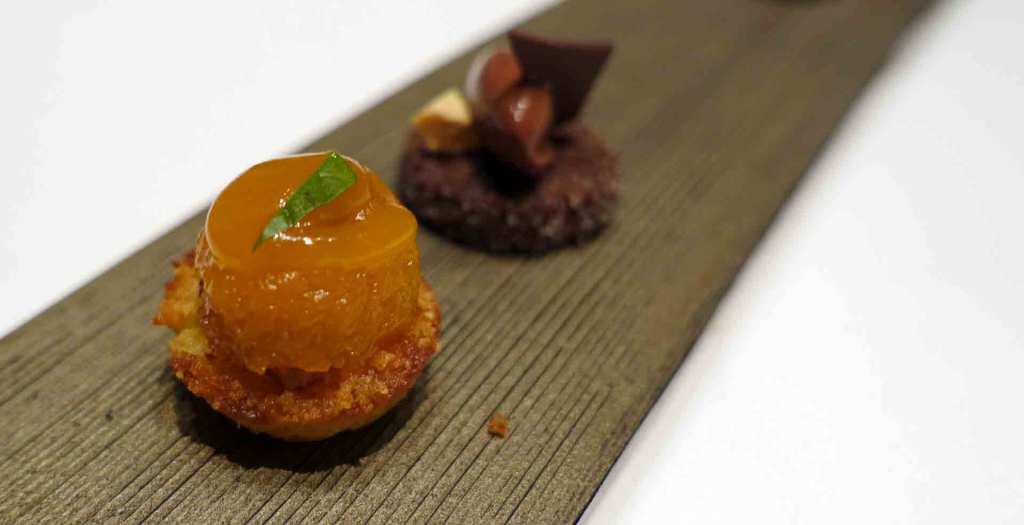 A mini apricot tart and chocolate shortbread with chocolate mousse. Both were sinfully buttery and melt-in-the mouth – a wonderful way to round off the meal.
It is easy to see why Michelin recognised Tirpse so quickly. The modern French food that we ate consisted of the best seasonal produce, wonderfully cooked, combined into innovative, delicious dishes which were beautifully presented. The incredibly friendly and knowledgable sommelier, Ohashi-san, matched our dishes with some wonderful wines – his recommendations are definitely worth taking note of. I, personally, will definitely be going back to Tirpse for more.
Tirpse can be found at Japan, 〒108-0071 Tokyo, Minato, Shirokanedai, 5−4−7 BARBIZON25 1F (Quintessence’s previous location).