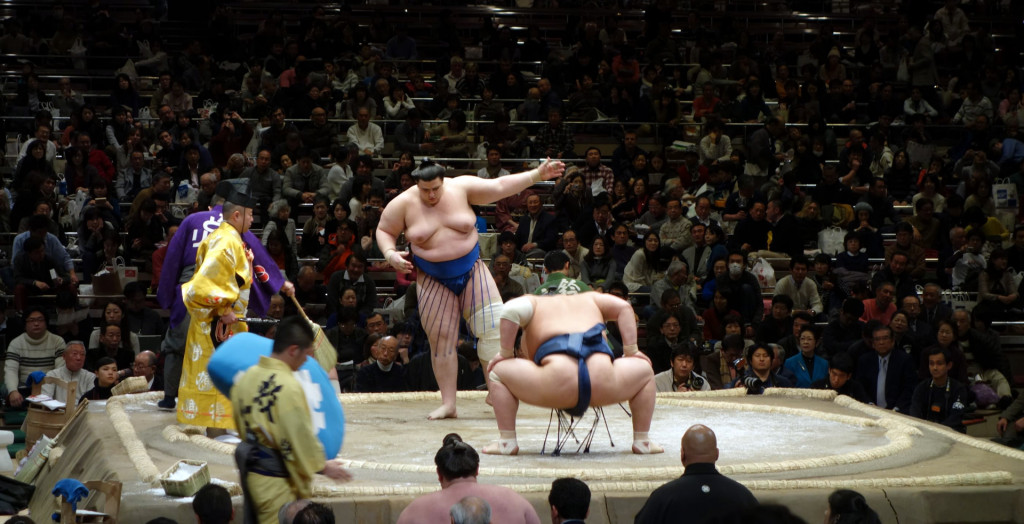 There are so many things to see in Tokyo that you can spend months there and feel that you have barely scratched the surface.  I by no means pronounce this a definitive list, but based on my experience to date the below are the top five traditional cultural sights that you should definitely try to fit in on a trip to Tokyo.

If there’s a tournament on when you’re visiting Tokyo, live sumo wrestling is a cultural sight that, you can’t really miss out on seeing.  As the national sport, tournaments are really popular so its worth buying tickets in advance (here). I found the pre-bout rituals particularly interesting to watch and found myself frantically googling the meaning of all the slapping and salt-throwing! 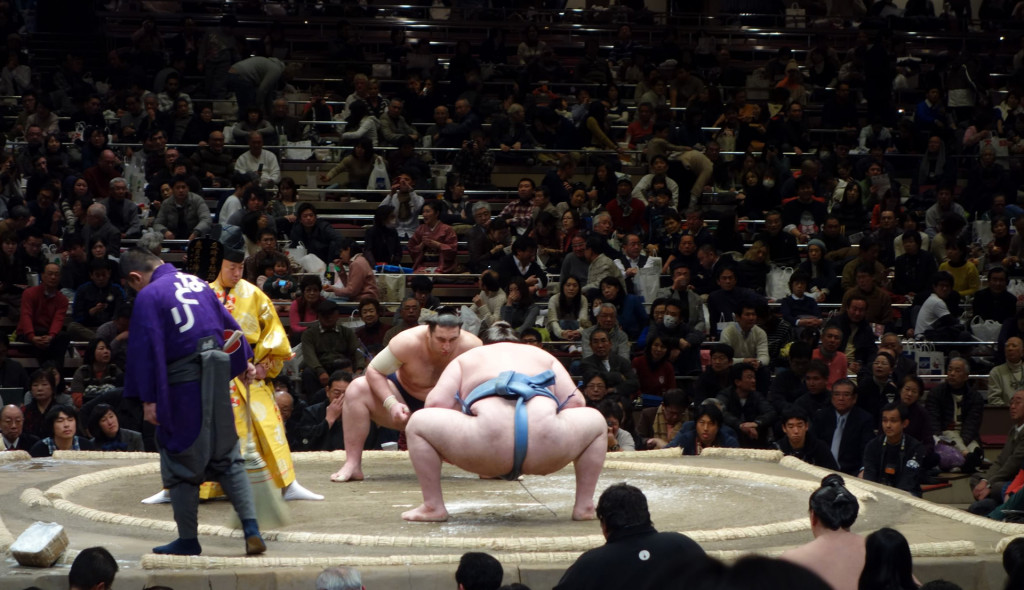 To be honest it all became a bit same, same but different to me a few bouts in but nevertheless it is really worth seeing it live if you can and the atmosphere in the stadium is amazing, especially towards the end of the day. 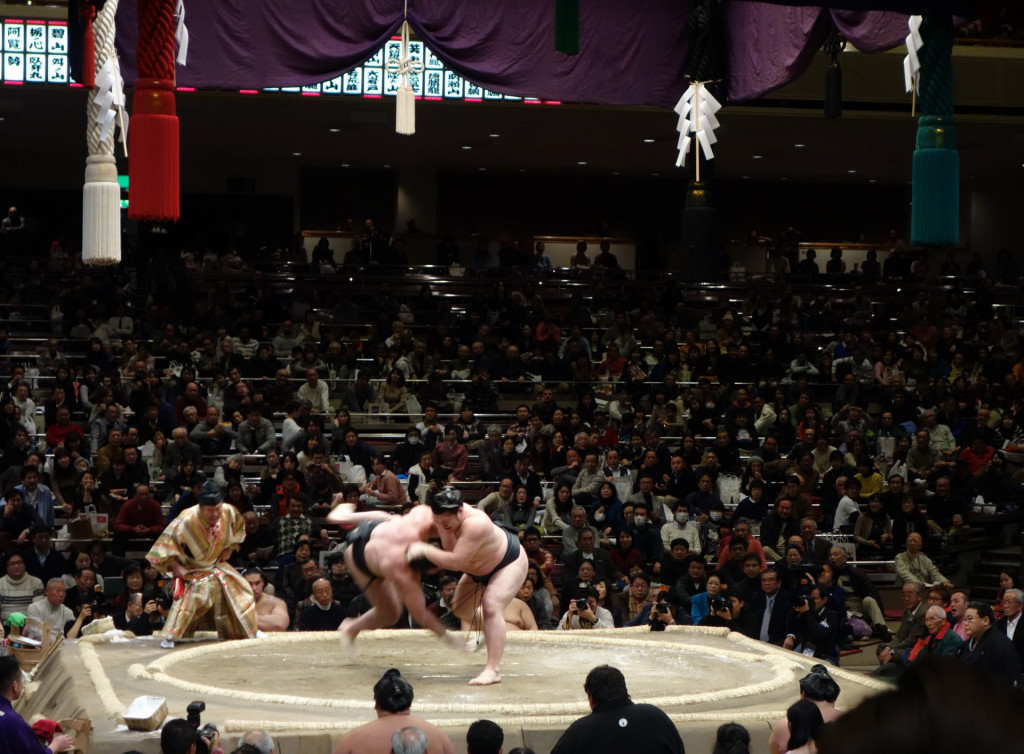 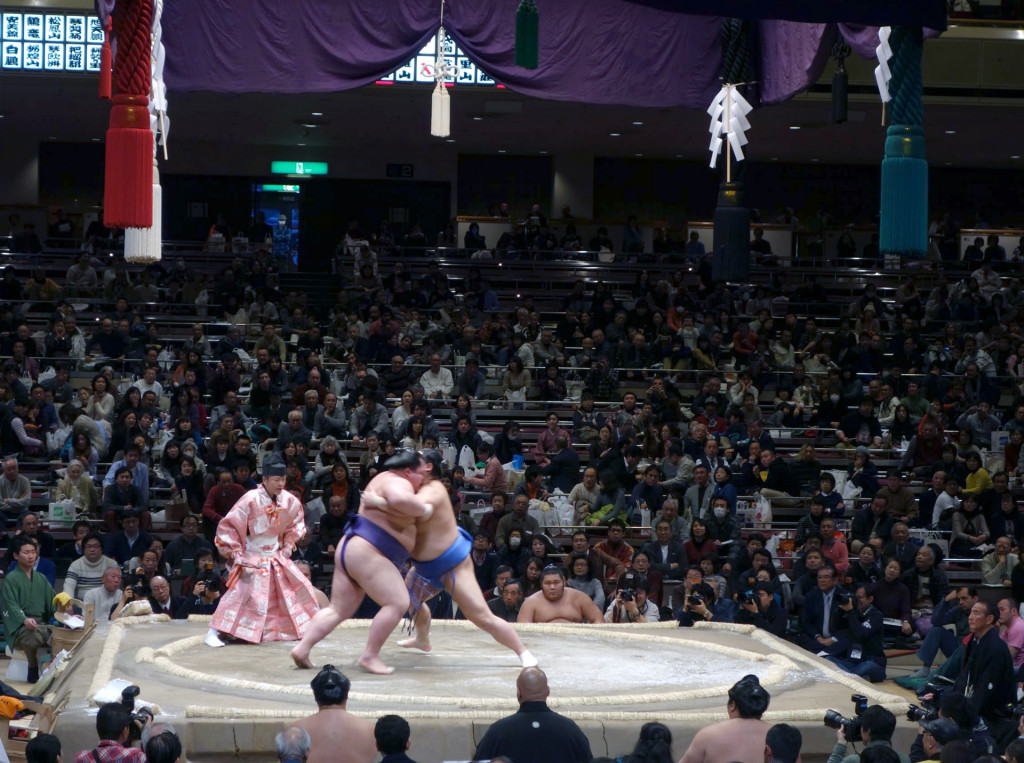 p.s. in terms of seating, I’d personally avoid ring-side – lots of salt in your face and some pretty eye watering views!  If you go for Japanese style box seats, bear in mind that these are sized for Japanese people and you might want to think about how comfortable you will be sitting on the floor for hours and book an extra box…

p.p.s. As we were lucky enough to see an actual sumo wrestling tournament during my time living in Tokyo I never actually went to the stables, but I understand that you can go on a guided tour of the stables to watch sumo’s training a few times a week.  If there’s no tournament on during your trip but you’re desperate to get a glimpse of the national sport I’d look into this.

When you think of Japan you think sushi right? Well, clearly there is a lot more to Japan but whether or not you are in Japan for the raw fish, a trip to the world’s largest wholesale fish and seafood market, Tsukiji, is a cultural sight which should definitely go onto your list of things to see. 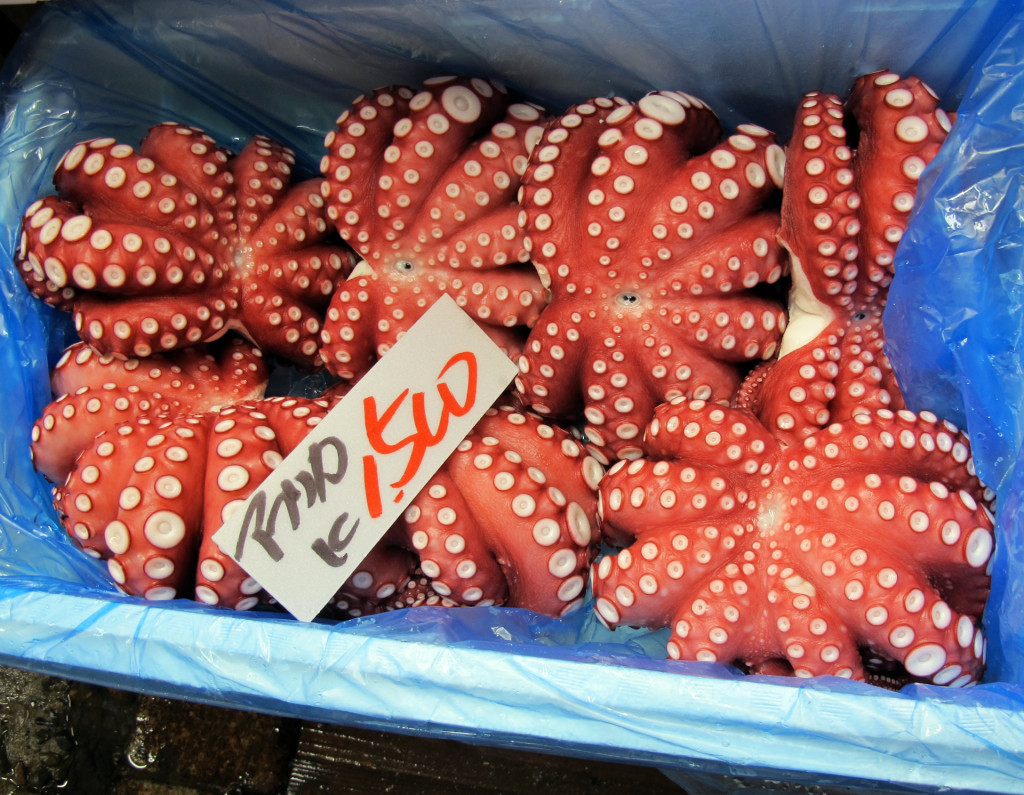 In order to see the best of Tsukiji you need to arrive at 9am on the dot (when it opens to visitors), this ensures that you see the market when it is in full swing. The variety of fish that you will see wandering around the market is eye-watering, 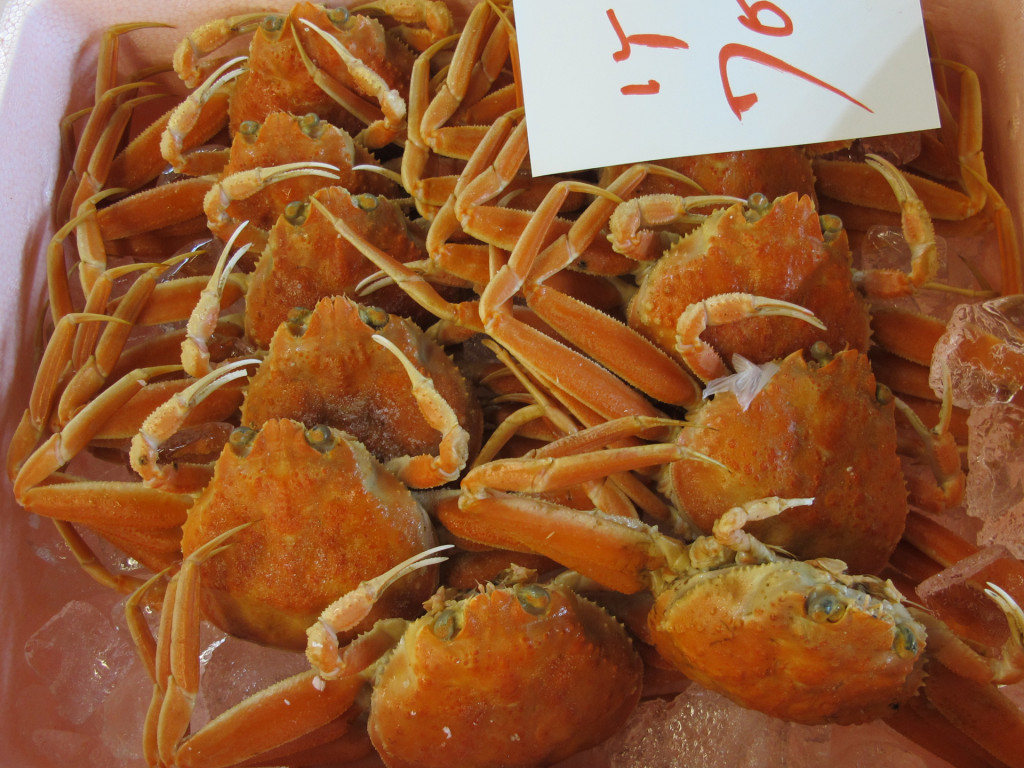 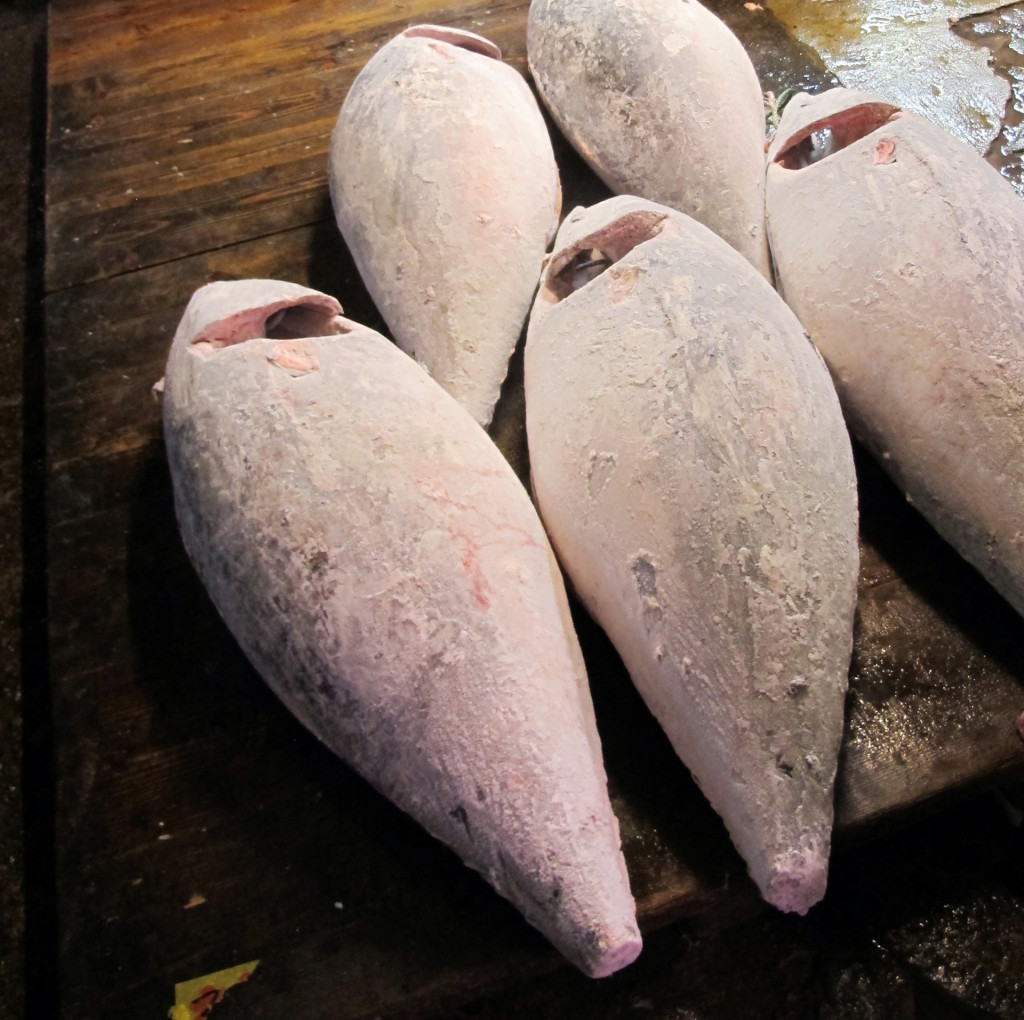 and watching the vendors carve up the huge tuna carcasses which impossibly long knives is a sight to behold. 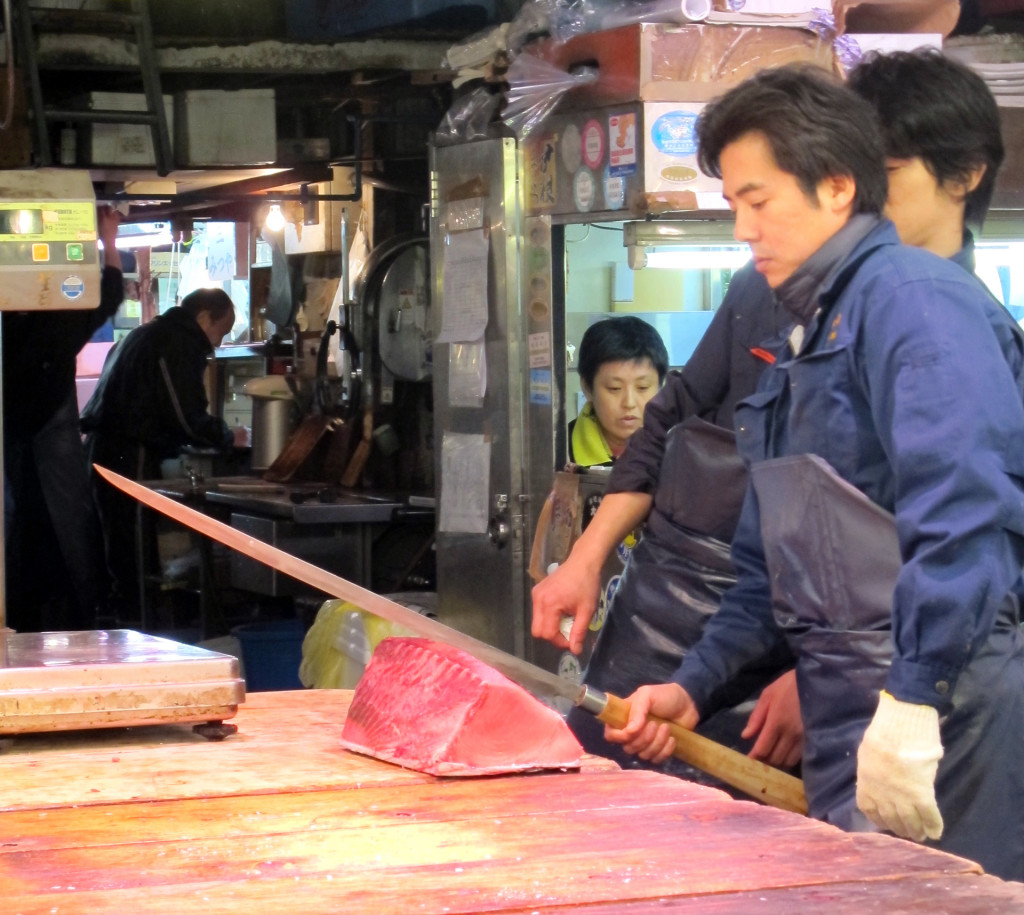 If you’re willing to get up super early you can go and watch the tuna auction.  I was always a bit too lazy for this (not least because the numbers are so limited that you can get up for 4 am and not manage to get a spot) but the auction is meant to be very interesting to watch.

The sushi restaurants nearby are a very popular breakfast spot – you can wait in line for the reigning favourite, Sushi Dai, for hours. Personally, I don’t think its really worth it as the sushi-yas in Tokyo are a cut above those in the outer market, still if you want very fresh fish at a very reasonable price (rather than the formality and expense of a Michelin-starred joint) these are a good option.

If you’re going to visit one shrine during your time in Japan, the Shinto shrine Meiji Jingu near Harajuku Station should go to the top of your list. 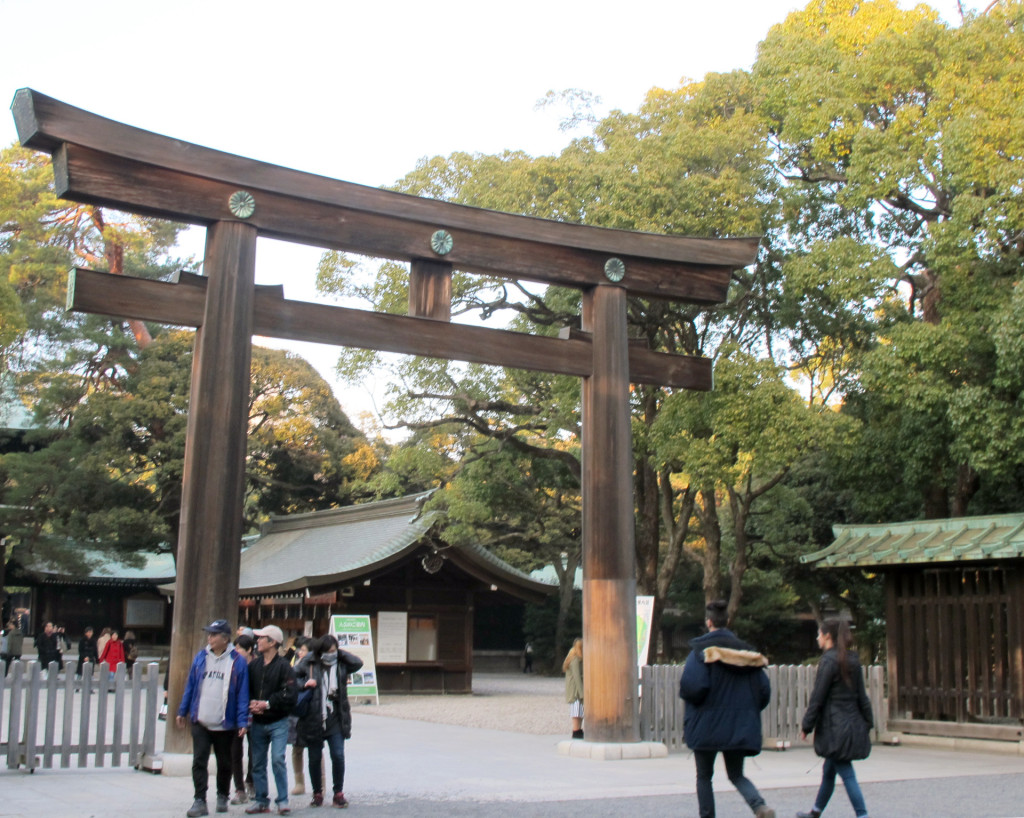 Set over a large area the forested grounds of the shrine are really peaceful to walk around.  I could spend hours looking at the beautifully decorated sake drums on the side of the path leading into the shrine. 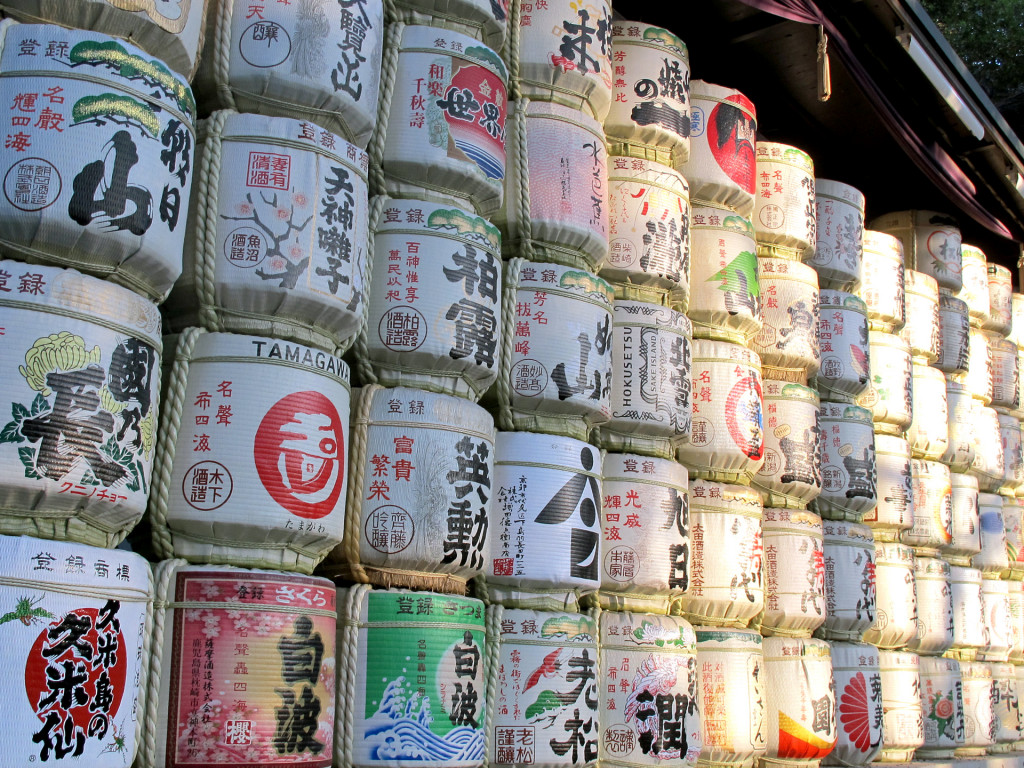 If you’re lucky you might come across a Shinto wedding ceremony in the main temple area – I was mesmorised by the beautiful traditional dress. 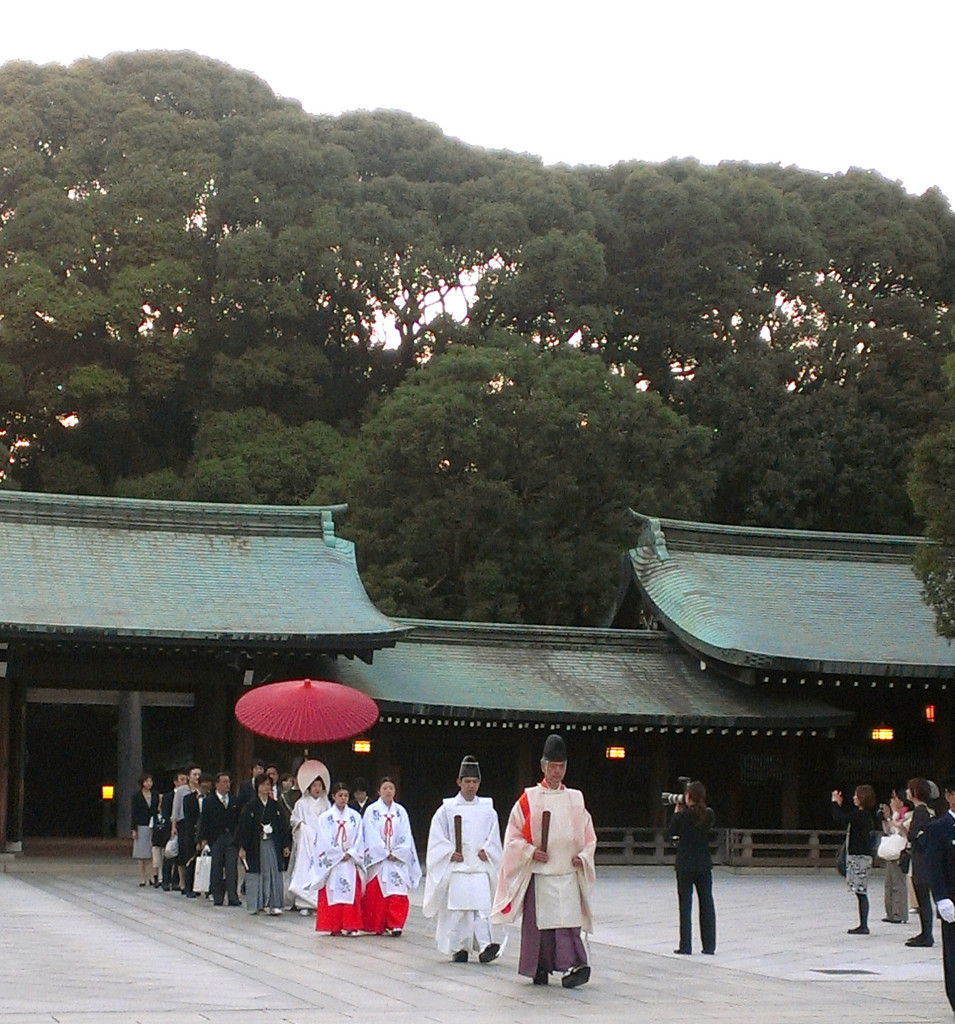 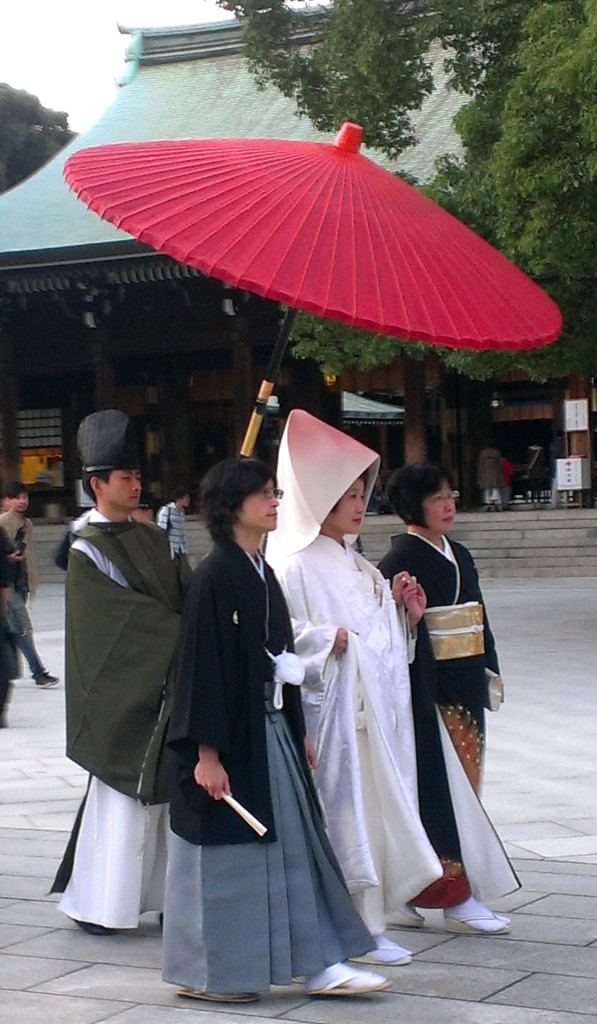 Conveniently located right next to Meiji-jingu is Yoyogi Park – one of the best people watching venues in Tokyo.

The park itself is large and quite beautiful but, unless the hanami is in bloom, the main event is the microcosm of Tokyo society that seem to flock to the park at weekends. 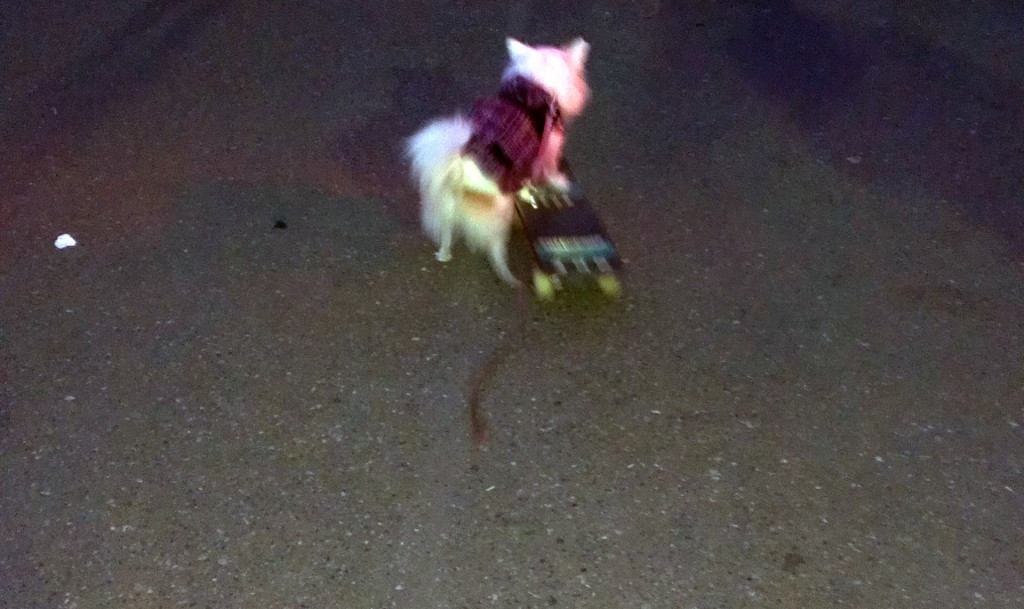 (apologies for the poor quality photo – this little puppy was going pretty fast – but I had to prove that this actually happened!!)

The buddhist temple of Senso-ji is one of the largest and most important temples in Tokyo and exceptionally beautiful.  As a cultural sight this is not one to miss…the bustling main temple is rife with beautiful detail, 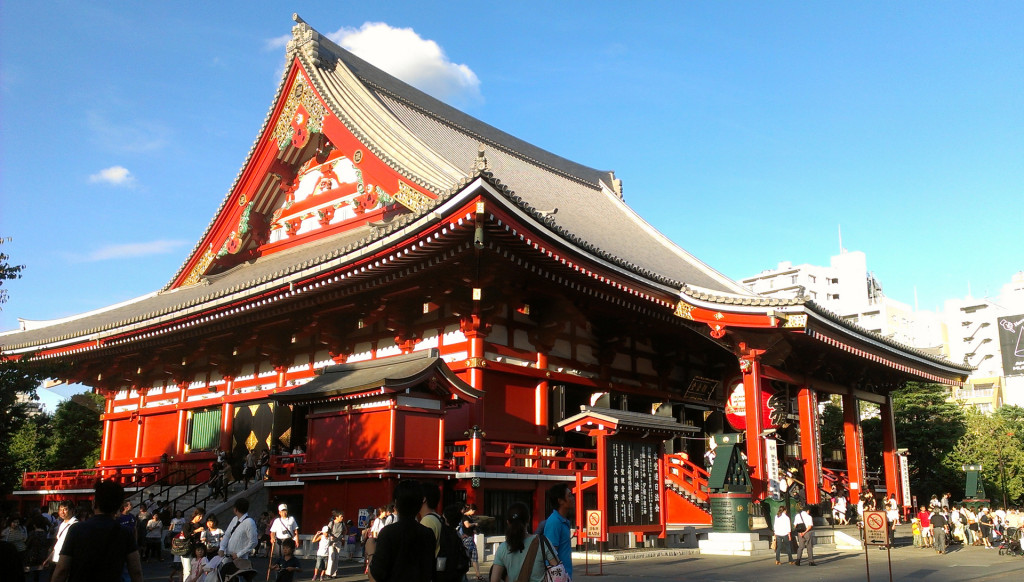 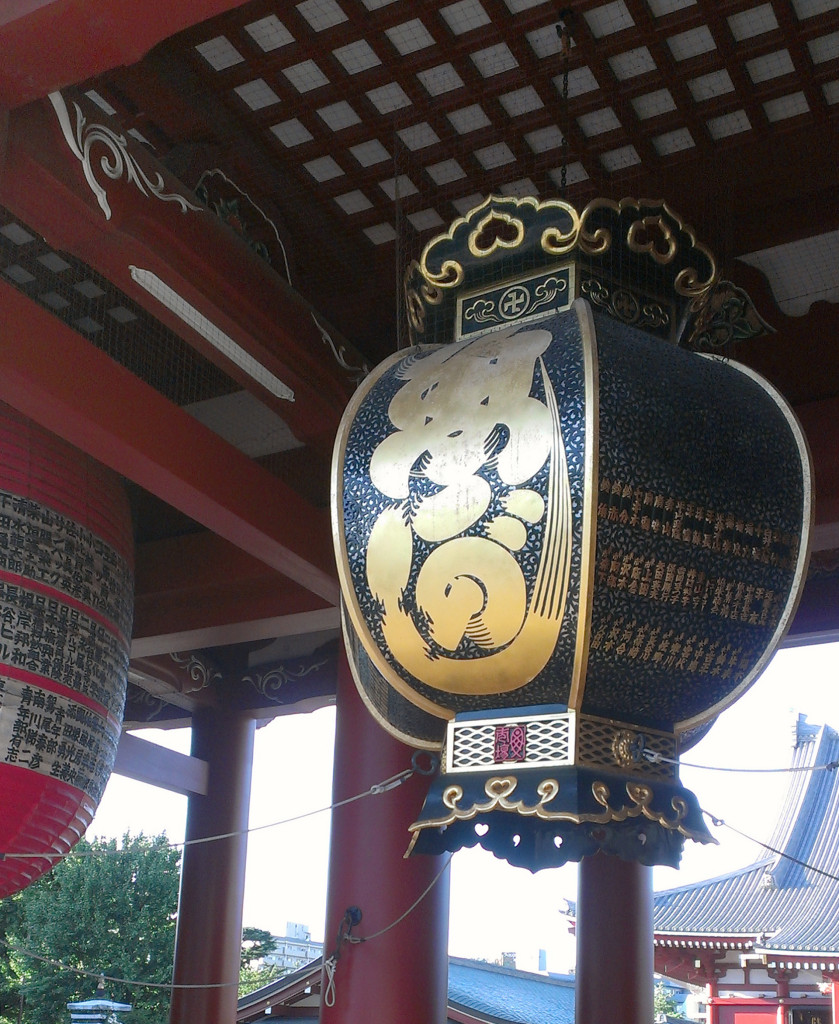 and the majestic five story pagoda is a sight to behold. 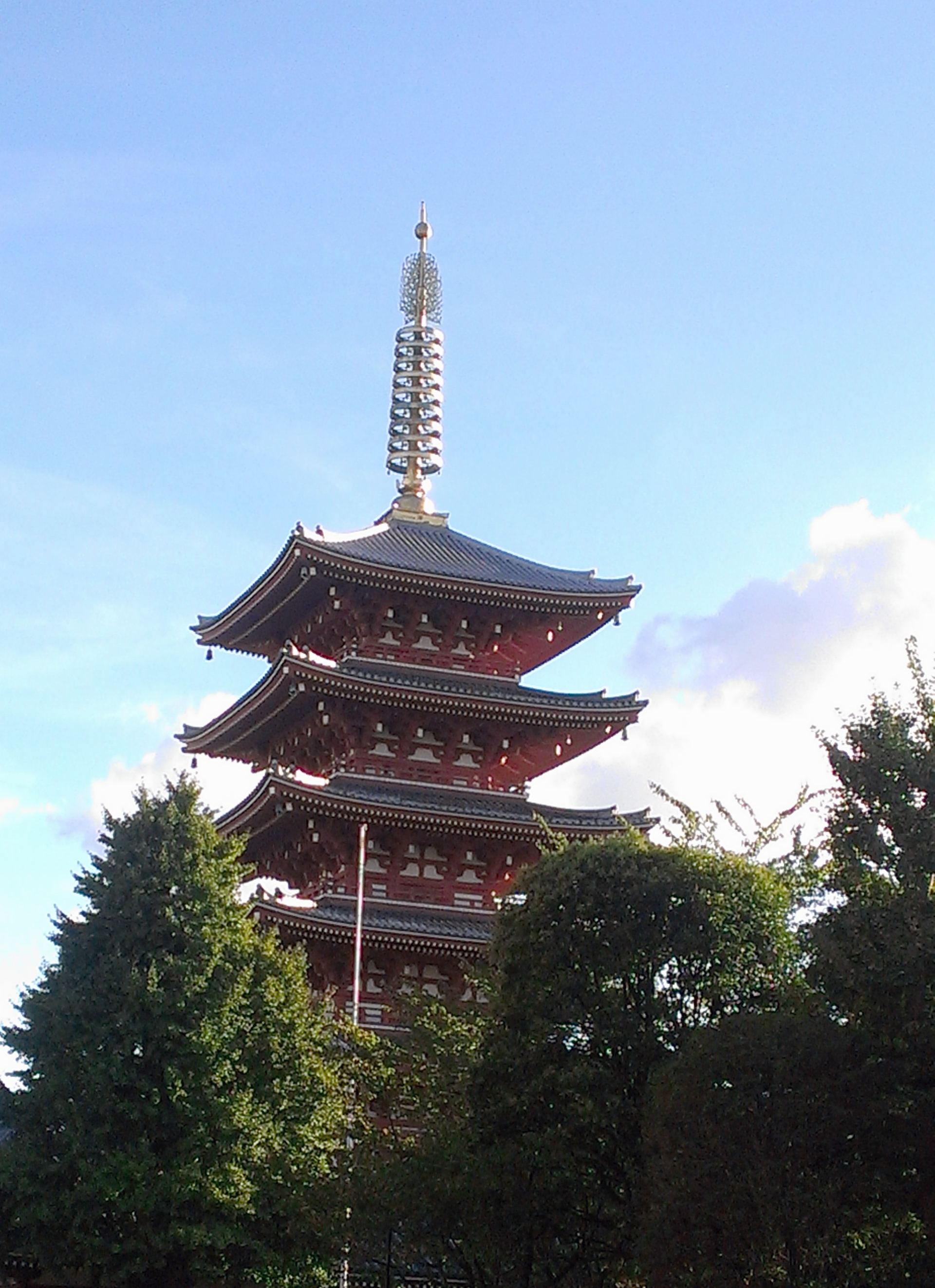 If you’re feeling brave you can obtain an Omikuji (written fortune) in the temple – be wary though, the more negative ones pack some punches!! If your fortune isn’t so good you tie it to the wire rack but even so if you take these things pretty seriously is might be one to hold off on or it could ruin your day/holiday…

Once you’ve soaked up the atmosphere at the temple, I’d take some time to wander around Asakusa as the atmosphere there is really different to many of the other areas of Tokyo.  As the centre of the ‘low city’, some of the buildings from the Edo period survive and there’s nearly a high rise to be found.  Nearby Nakamise, lined with shops selling souvenirs and traditional snacks, is definitely worth a pootle.

I’m very excited to be heading back to Tokyo in October, so check back for an update on an cultural sight or two to add to your to do list!