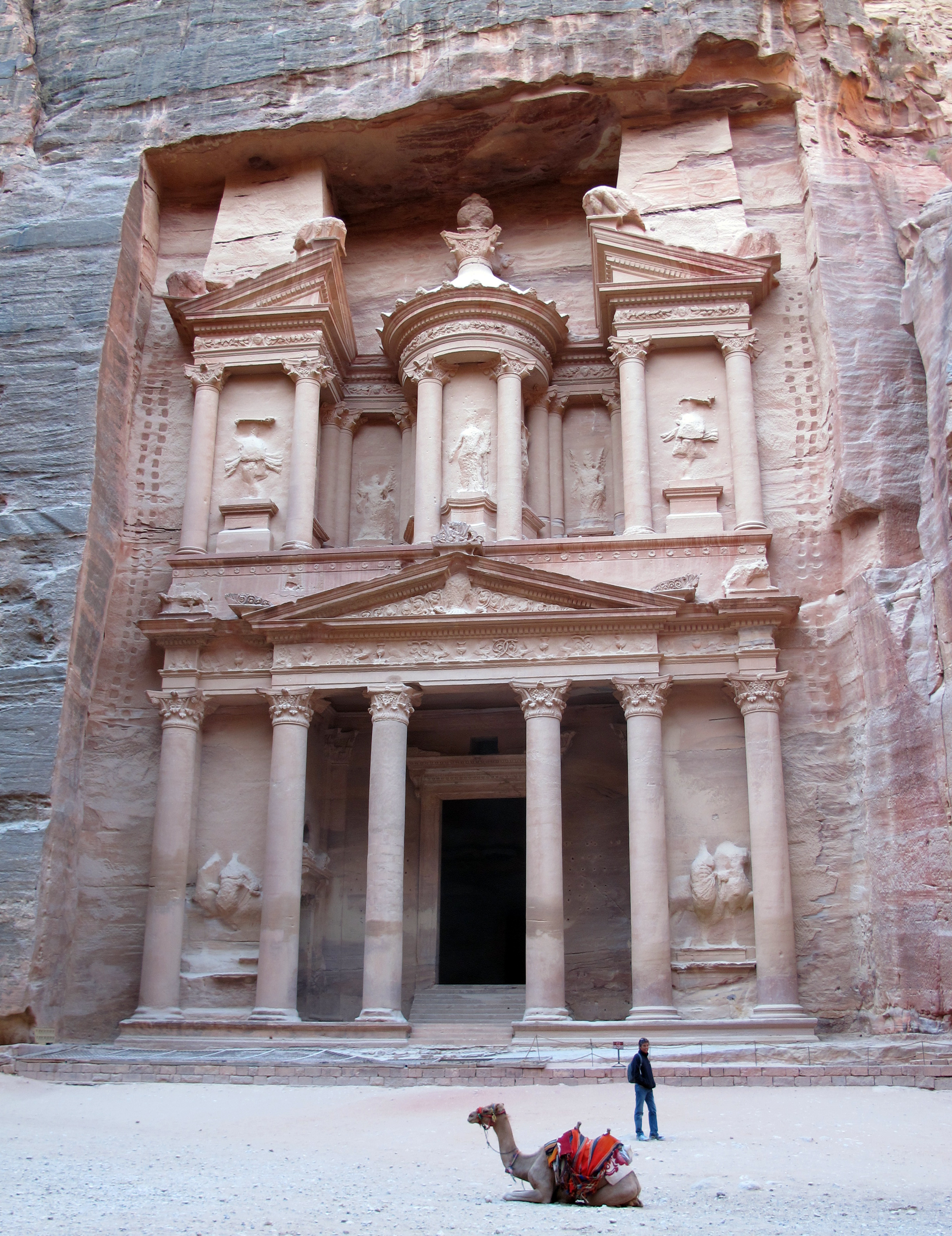 As the history geek in me is still alive and well, one of the main draws of Jordan for me was Petra…Southern Jordan’s most dramatic cultural and archaeological sight, famous for lavish buildings carved into the rock. One of the seven wonders of the world, Petra definitely lived up to it’s reputation for me…I was totally mesmerised by the temples and buildings punctuating the dramatic natural landscape.

It’s definitely worth staying close to the entrance as this means you can get into Petra before the tour bus groups arrive. Wadi Musa, the village next to the ancient city of Petra, is overrun with hotels but after some research we decided to check into the Petra Moon Hotel, a brilliant hotel only moments from the entrance to the old city.  Slightly more within budget than some of the hotels on offer the Petra Moon Hotel still offers large and comfortable rooms, a sumptuous breakfast which sets you up for a long day’s walking around Petra and a lovely pool on the roof to relax after a hard day’s sightseeing.

The path into Petra, known as the Siq, is a walk between sheer cliffs of rock the scale of which is awe-inspiring (and makes you feel very small!)

After about twenty minutes of walking you finally emerge through the rocky outcrop and straight into the face of Al Khazneh (the Treasury) – the most famous building within the Petra complex. 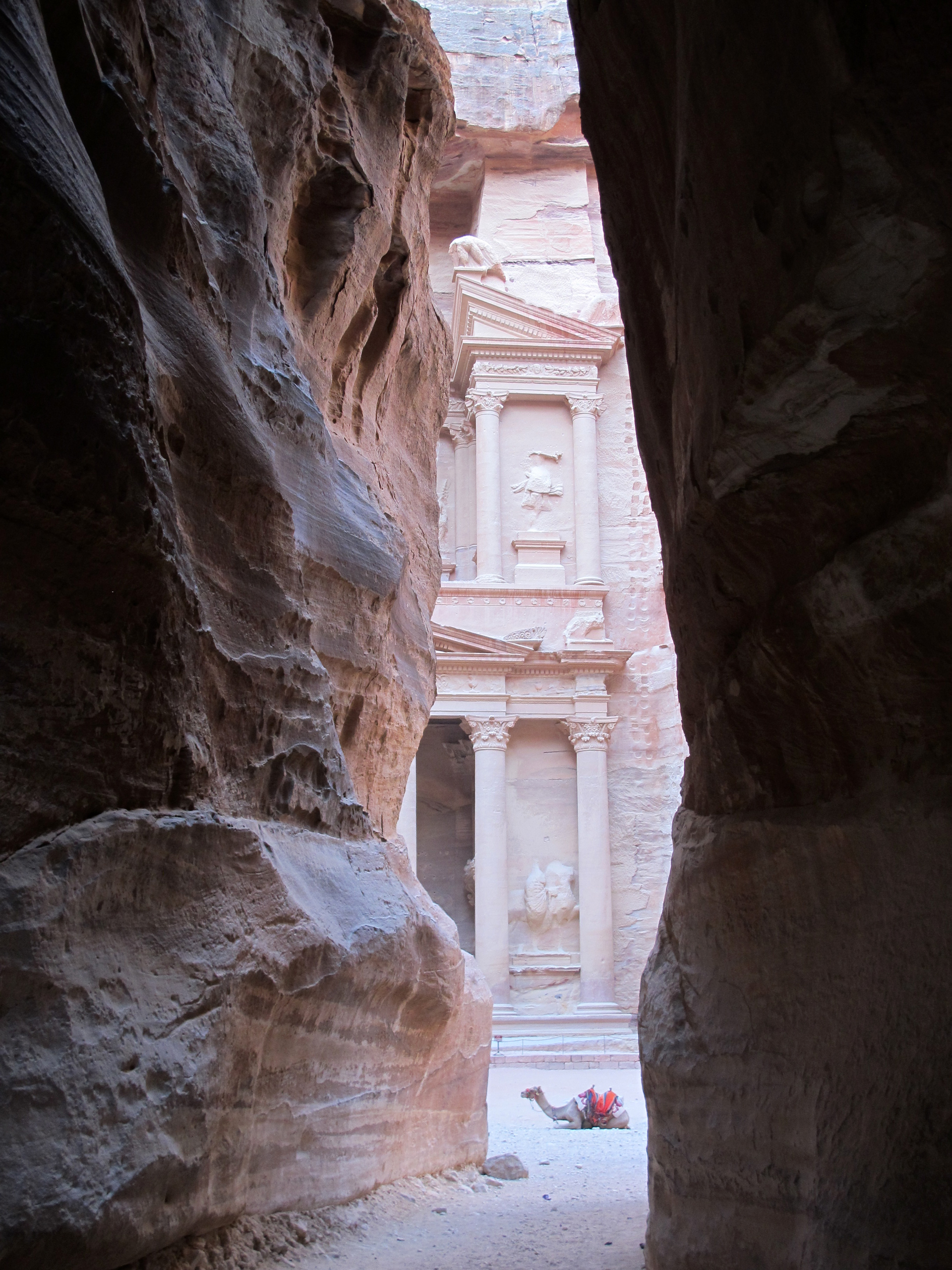 Carved into a sandstone rock face at the beginning of the first century AD, the Treasury is actually a mausoleum/crypt but is so named as legend has it that bandits hid their loot in a stone urn on the second level.  This temple carved into the side of a huge rock face is as beautiful and well-preserved as it appears in all the guidebooks and postcards. 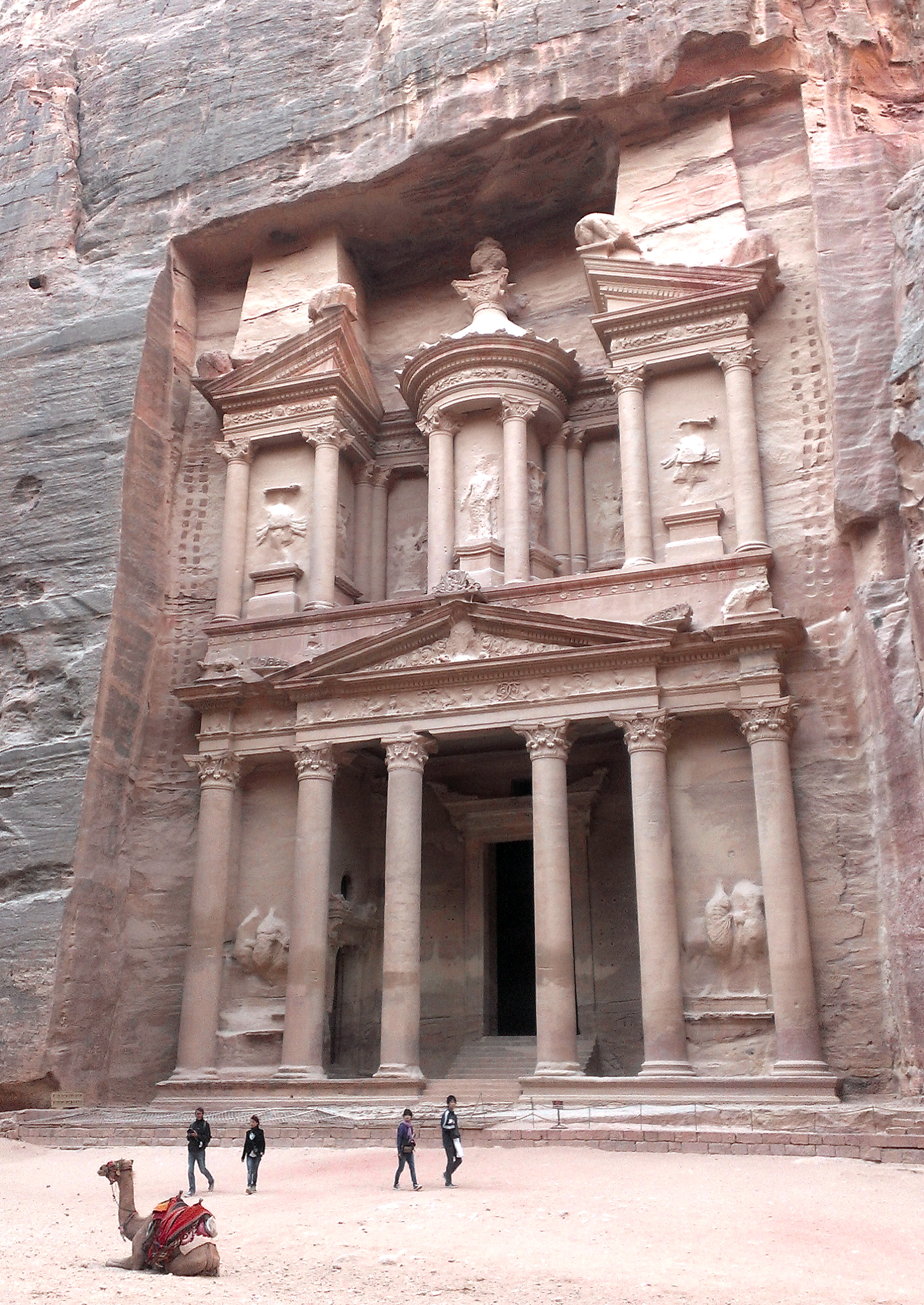 As Petra is in the middle of the desert it was actually pretty cold early in the morning so we were very grateful for the tea stall at the base for the sweet, spicy and delicious Turkish coffee which warmed our cockles while we waited for the sun to rise over the rocks and onto the Treasury’s face. 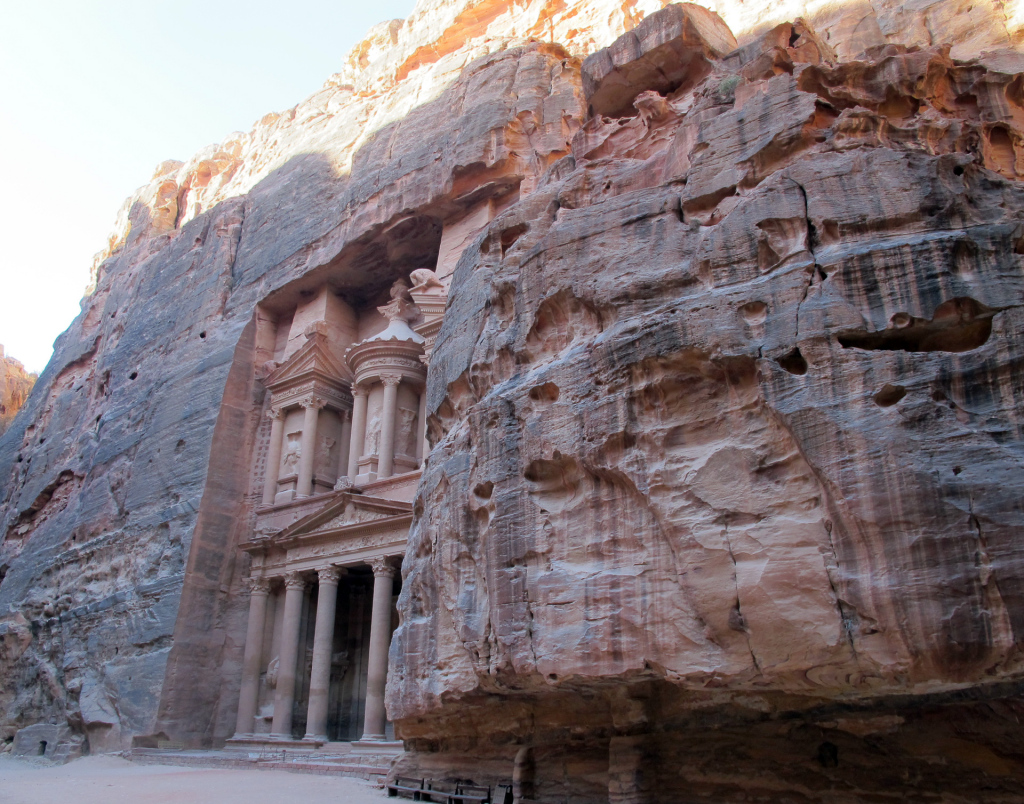 The sun rising totally changes the colours of the scenery and gives them the rose hue that gives Petra its nickname of ‘the Rose-Red City’. 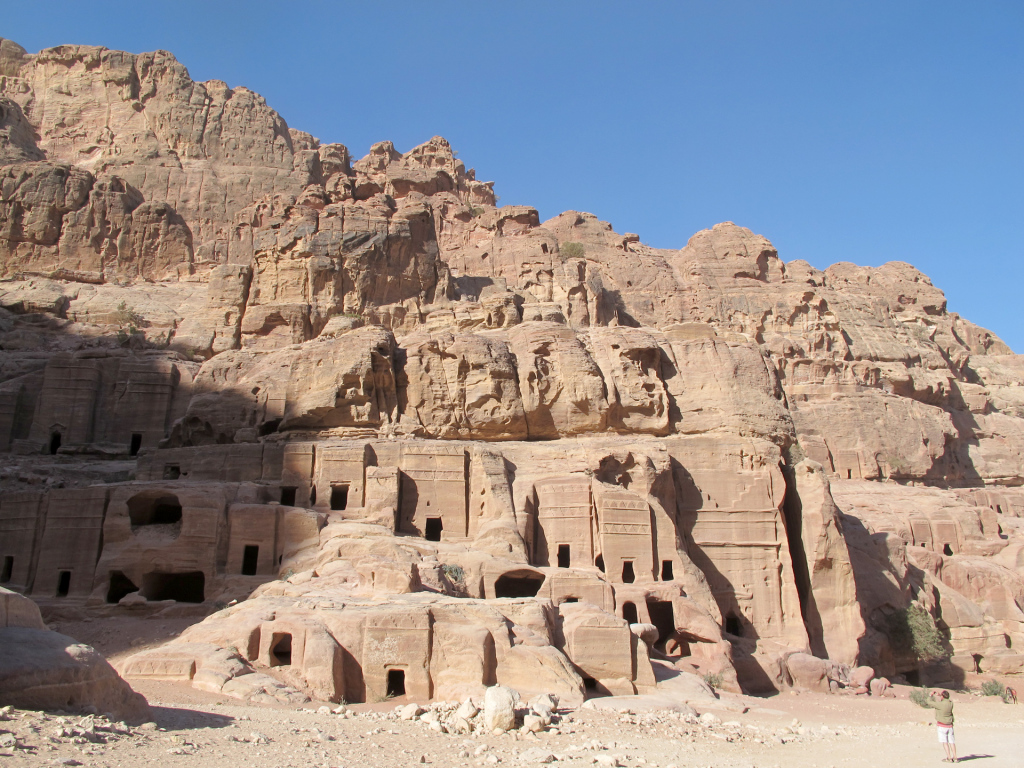 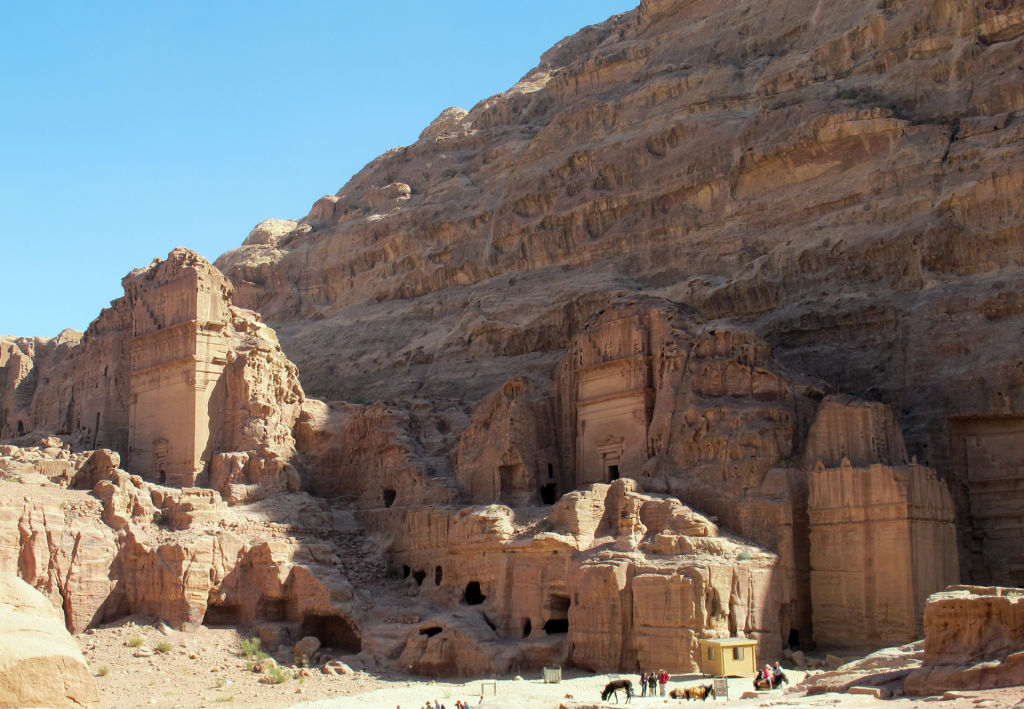 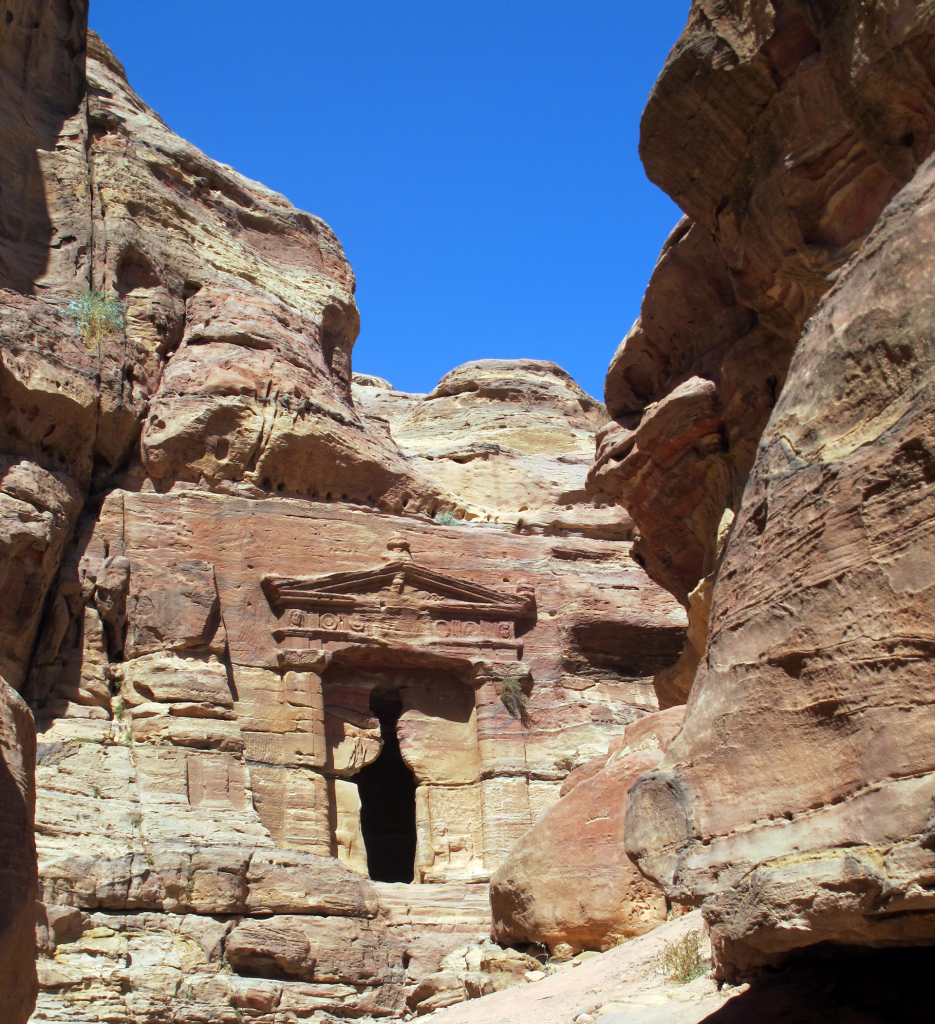 as well as numerous other impressively carved tombs, churches 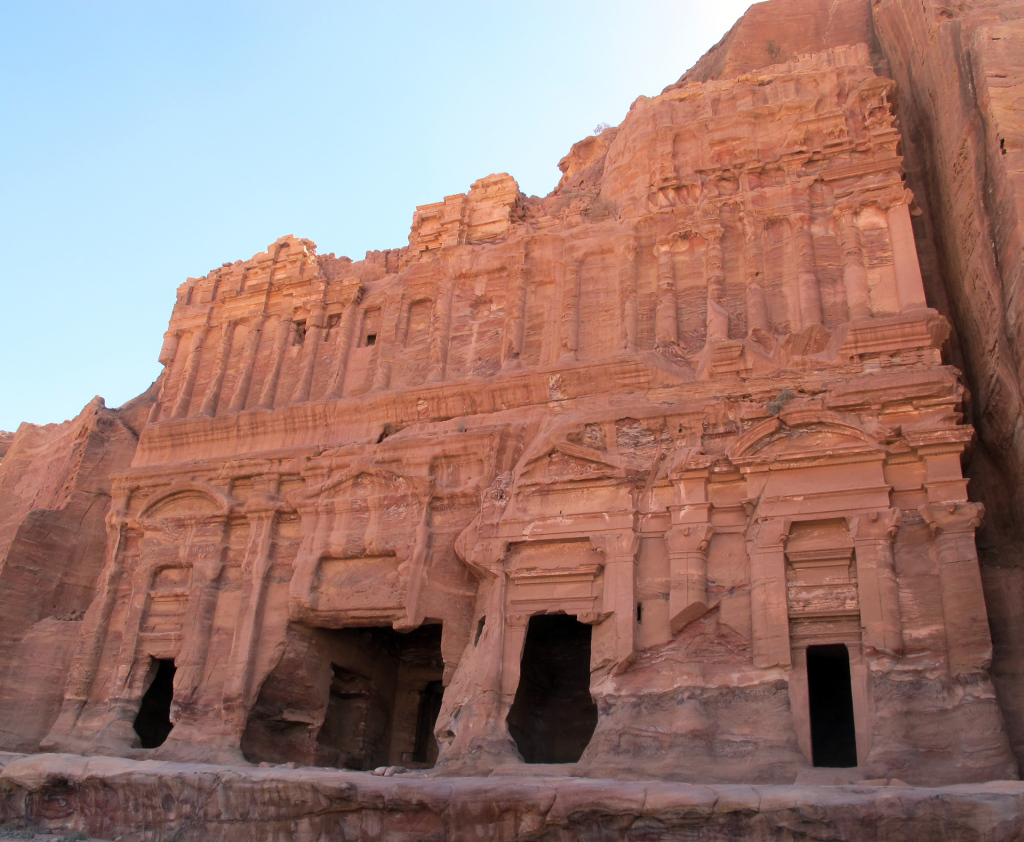 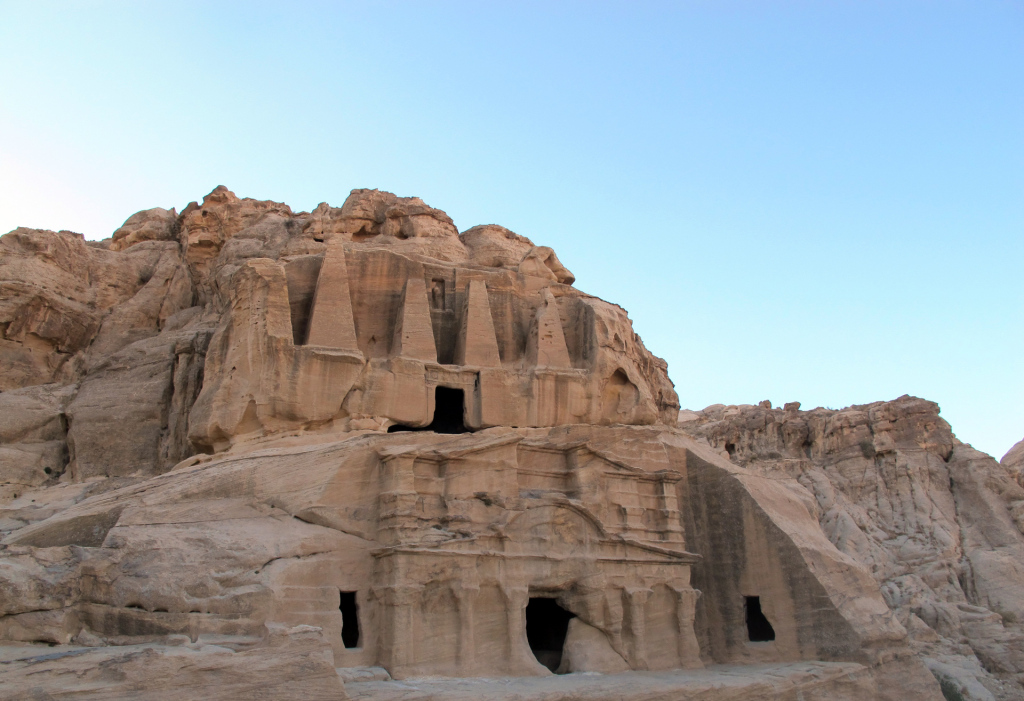 and a large Roman amphitheatre. 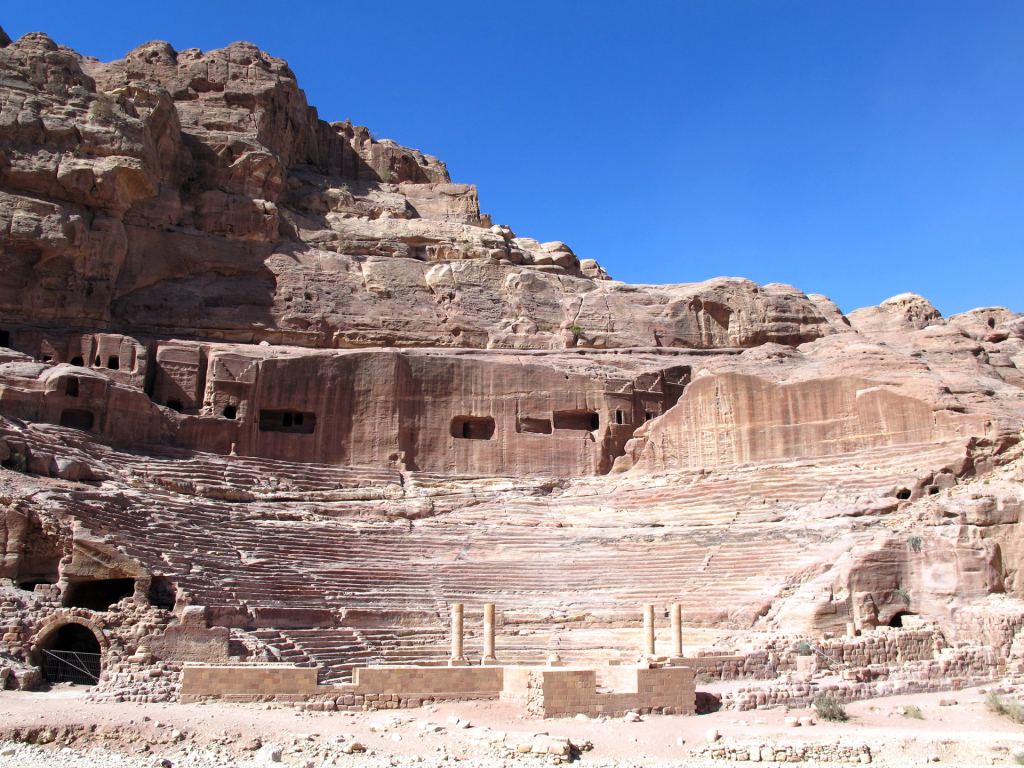 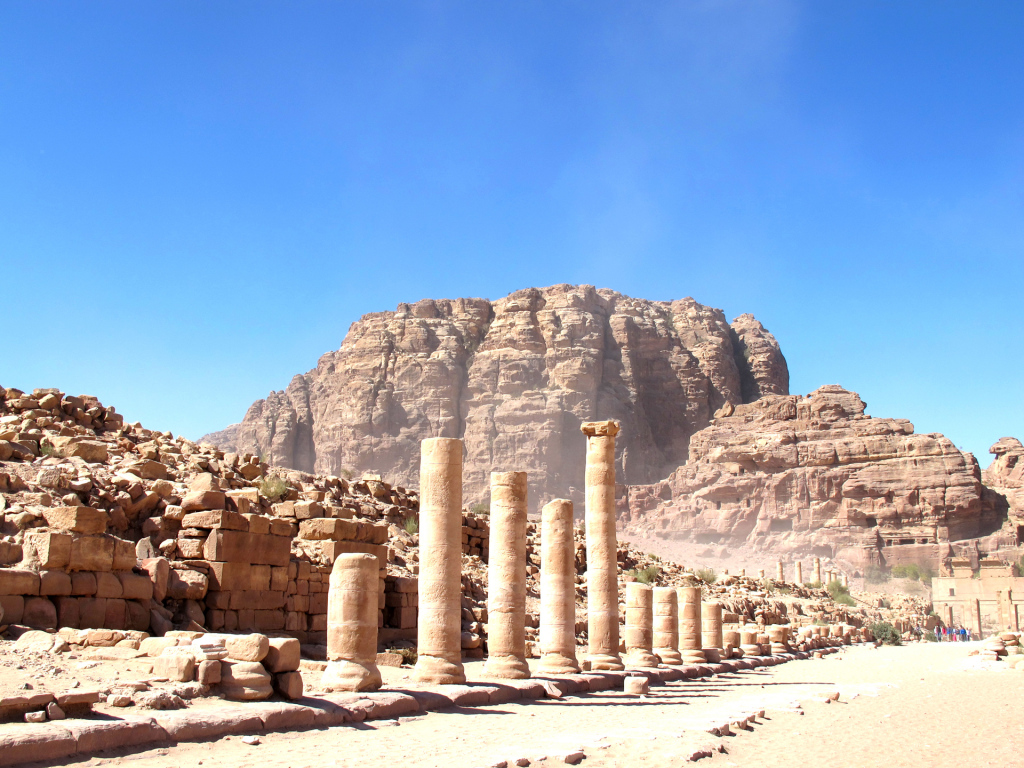 Not to mention the otherworldly rock formations that totally blew me away. 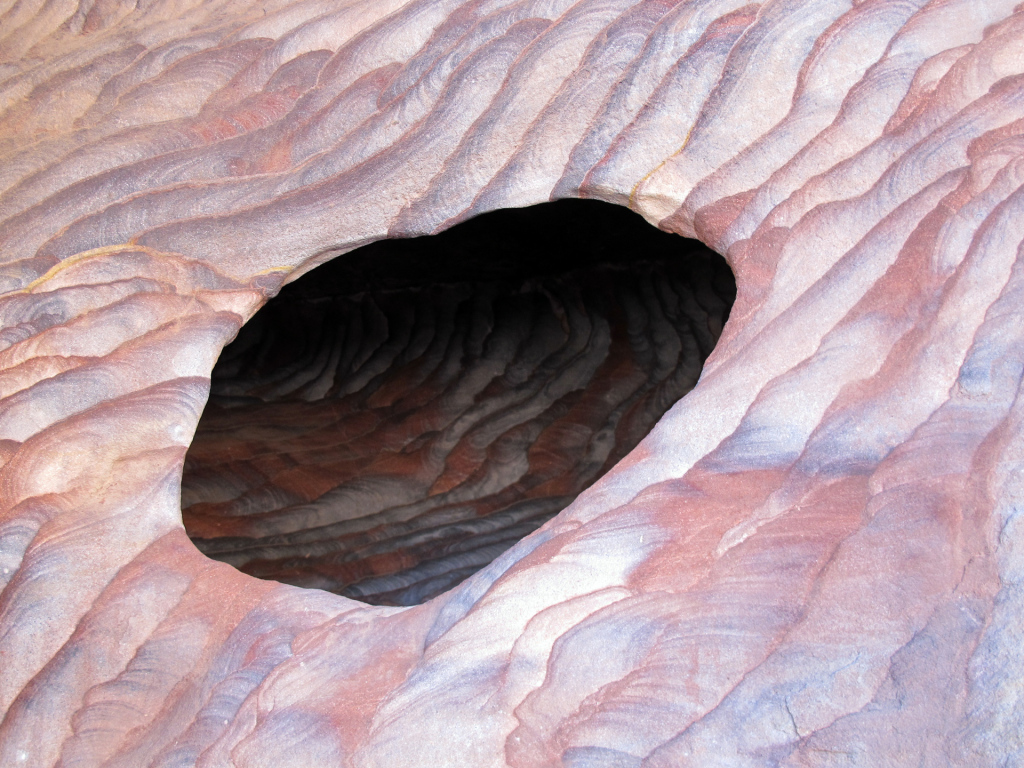 And some great viewpoints to climb up to 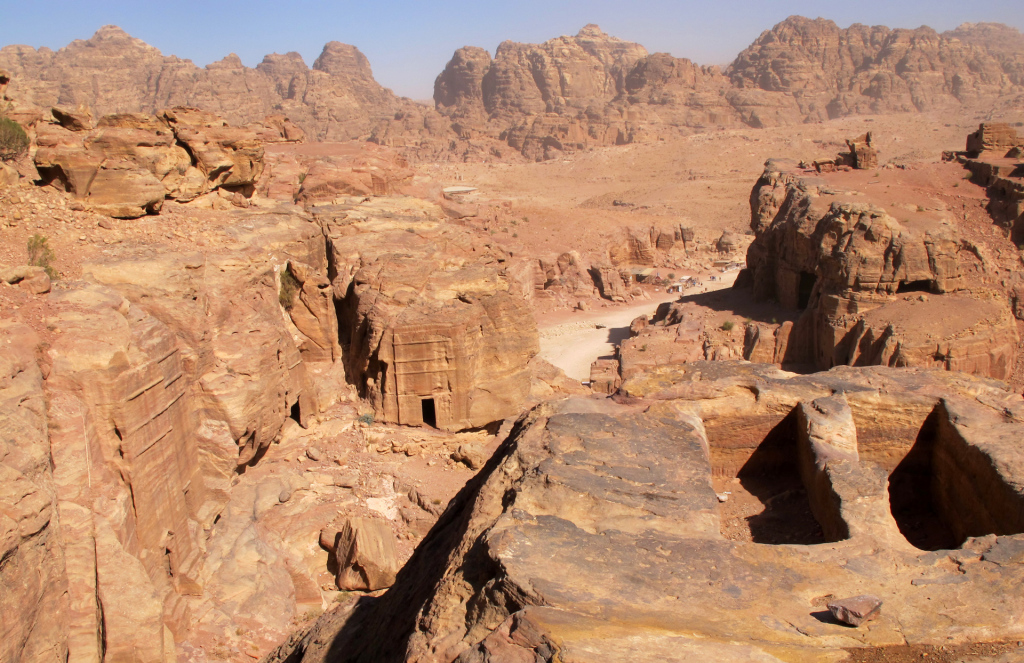 For me the highlight was a trek up some ancient steps to El Deir (the Monastery) – another building carved into a huge rock face which is similar in looks to the Treasury but on an even more impressive scale. 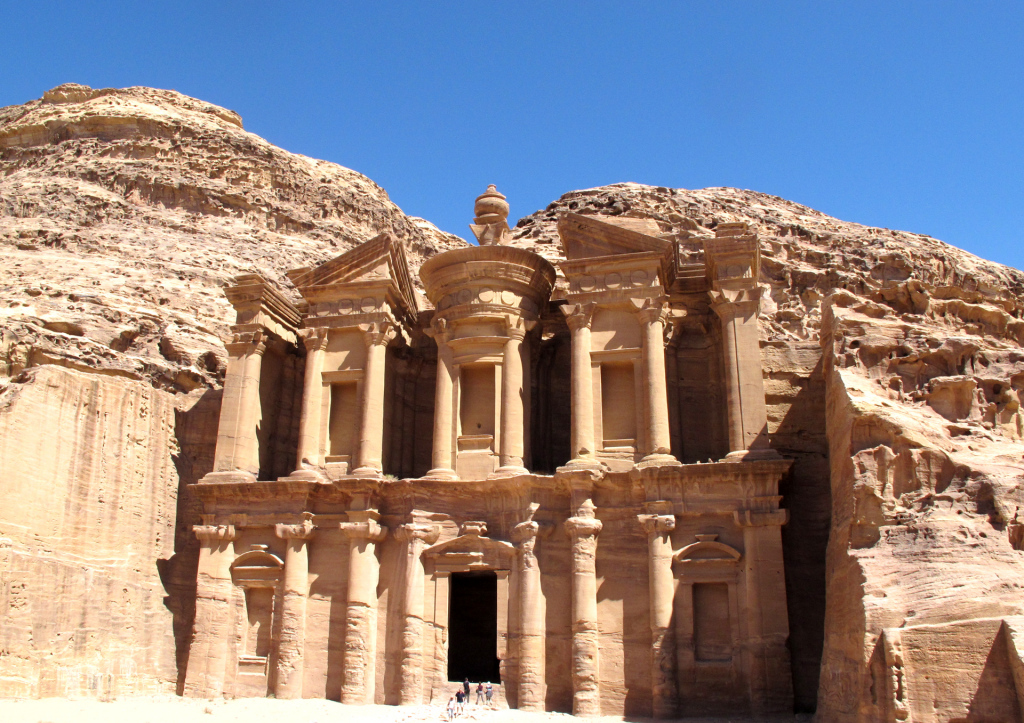 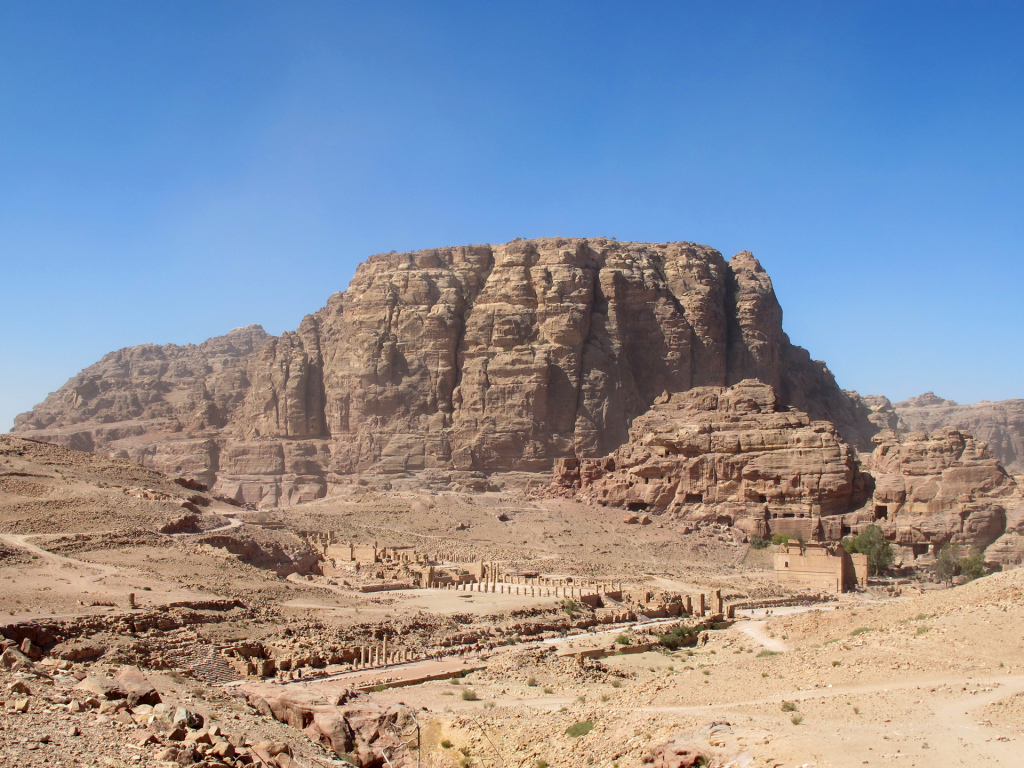 The food inside the grounds is pretty uninspiring, and overpriced, so I’d definitely recommend stocking up on delicious date and fig filled goodies from the Sanabel Bakery in Wadi Musa the day before you head into Petra to keep you going.

After a long day of walking we were very glad to relax back in our hotel and after regaining our energy we dragged ourselves out for a drink in the Cave Bar, touted as ‘the oldest bar in the world’.  Although the location is unique, the drinks were not exactly delectable and so after one (or half a drink in my case) we moved on to Red Cave restaurant for some traditional Bedouin fare where the kind and helpful staff and delicious food were welcomed after a rather tiring day.