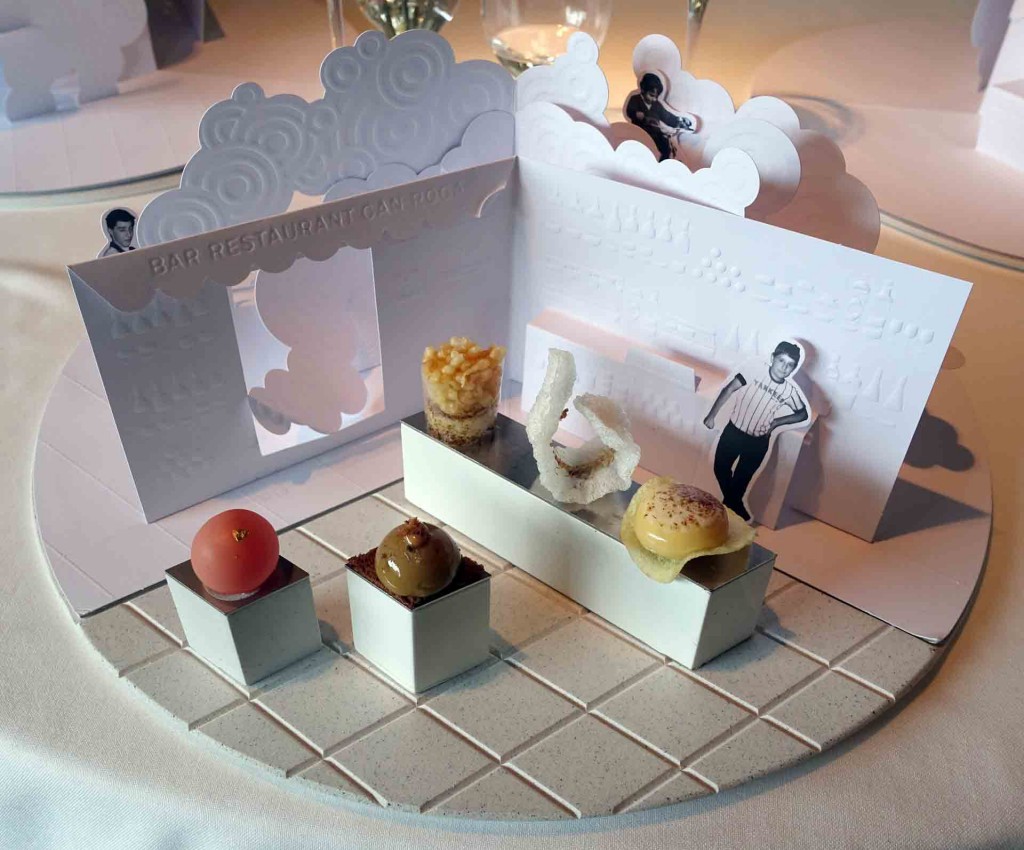 As I mentioned in Wednesday’s post about Barcelona (here), over a year ago I diligently sat up to book at table at San Pelligrino and Acqua Panna’s Number One Restaurant in the World, El Celler de Can Roca. It was a case of third time lucky (as I had tried a couple of times before) and scored the boy and I a table a deux. Then it was just a case of waiting to see what all the fuss was about.

The restaurant itself was beautiful. On entering you walk through a courtyard which looks out on the traditional structure (a great place to take your after lunch coffee…not least because there are big comfy, sofas on which to rest your bloated body!) Inside the restaurant has been beautifully designed – there is lots of glass, space and light and a beautiful central atrium. 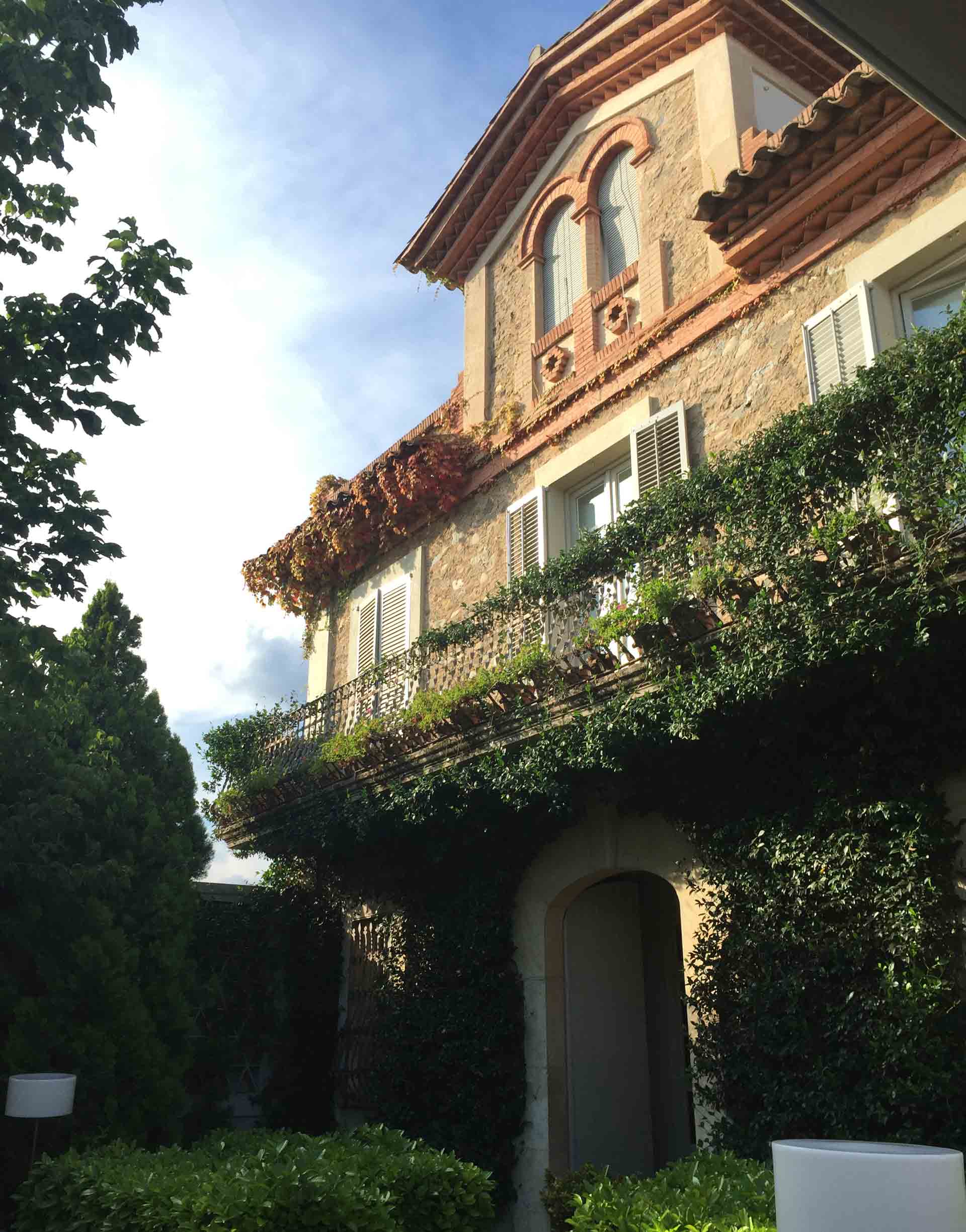 Set up by three brothers (who between them expertly cover the savoury dishes, puddings and wine), El Celler de Can Roca is known for its innovative molecular gastronomy and twists on traditional Catalan food.

We started with “the world” or a series of snacks inspired by the Roca brothers’s travels. “The world” included tastes of Mexico, Turkey, China, Morocco and Peru. 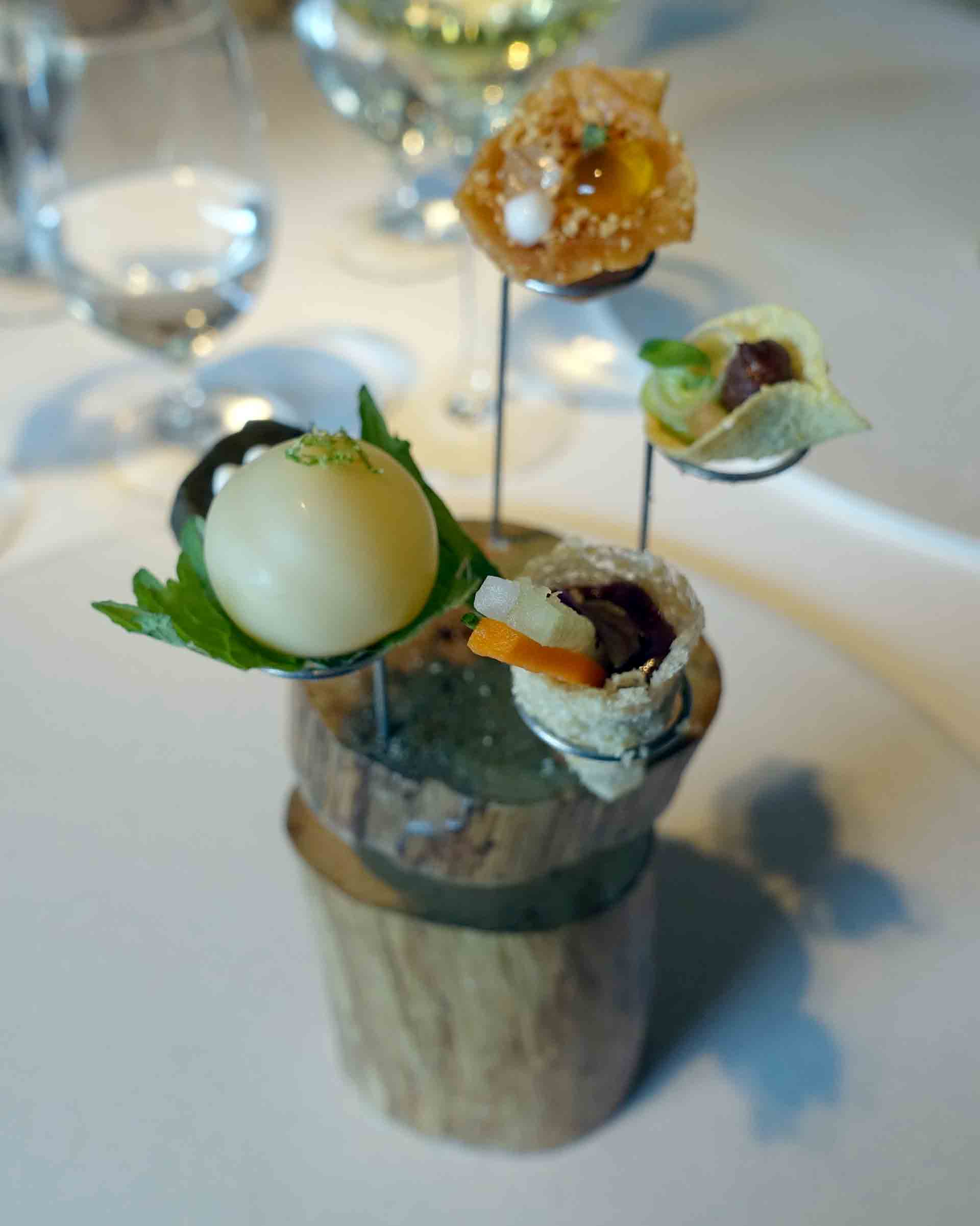 The Moroccan bite was my particular favourite – it had just the right amount of sweetness and a real depth of flavour.

Next up was “Memories of a bar in the suburbs of Girona”. A beautifully presented series of snacks which included breaded squid, a pigeon bonbon, potato and onion omelet, anchovy bone in rice tempura and a campari bonbon. 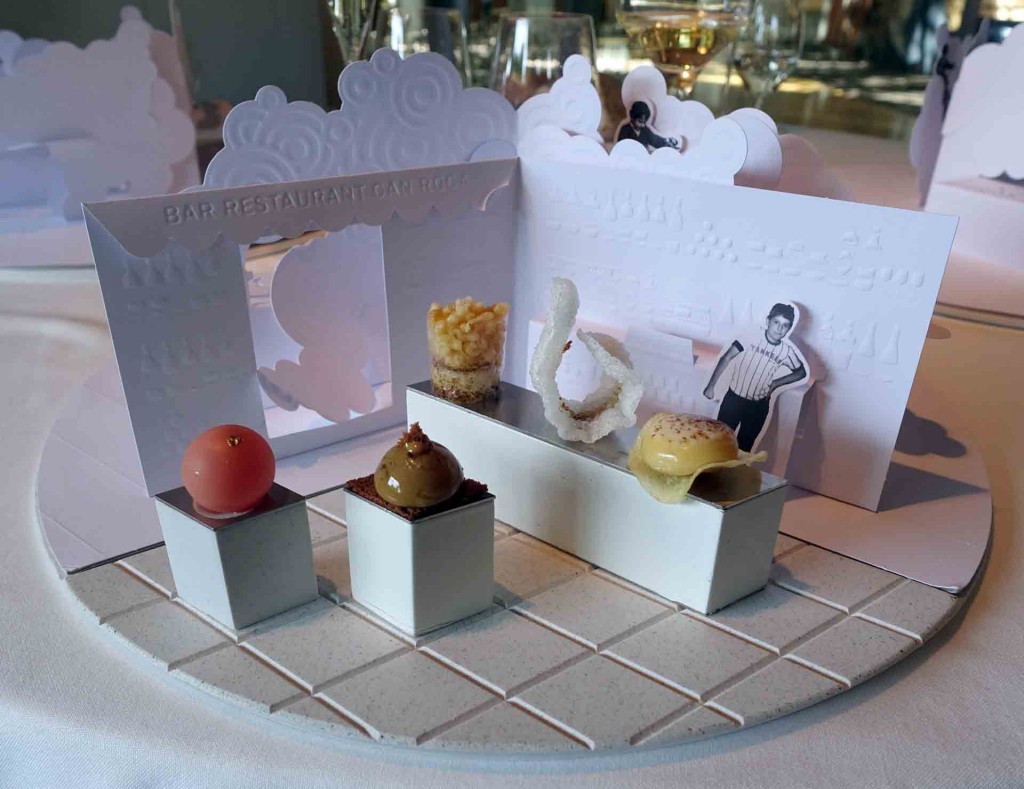 Each bite was full of flavour and had a unique texture – the potato and onion omelette stood out for me; a delicious take on the most traditional of tapas. Am I alone, however, in not enjoying ‘bonbons’? I find the outside casing just leaves a waxy taste in my mouth and ultimately detracts from the fillings. 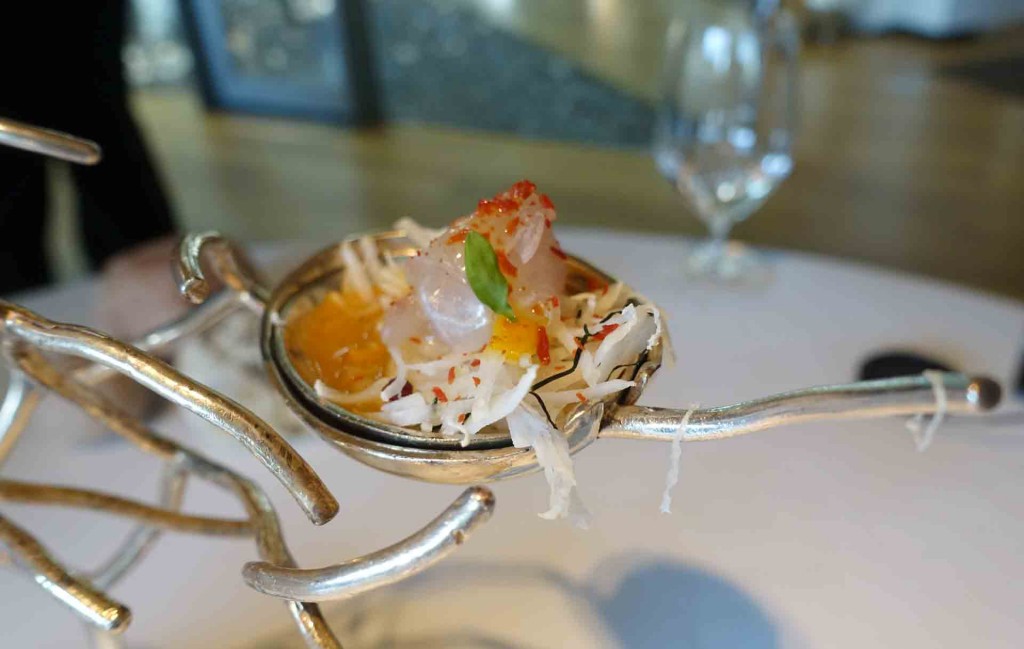 The latter was a bit disappointing to be honest – the sea bream just didn’t seem to taste of much although the accompanying sauces were delicious.

The mushroom bon bon with mushrooms brioche was a delicious way to end the ‘snacks’. 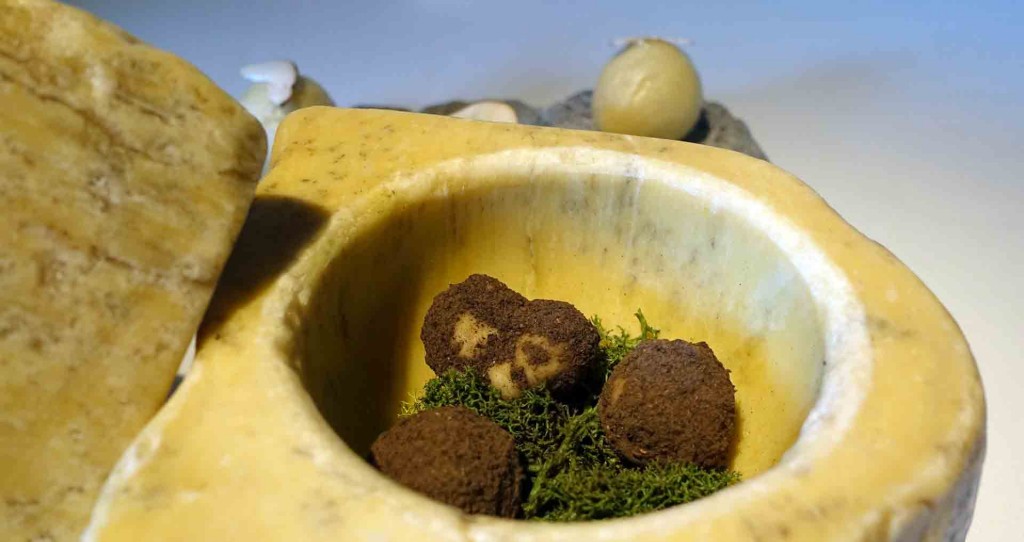 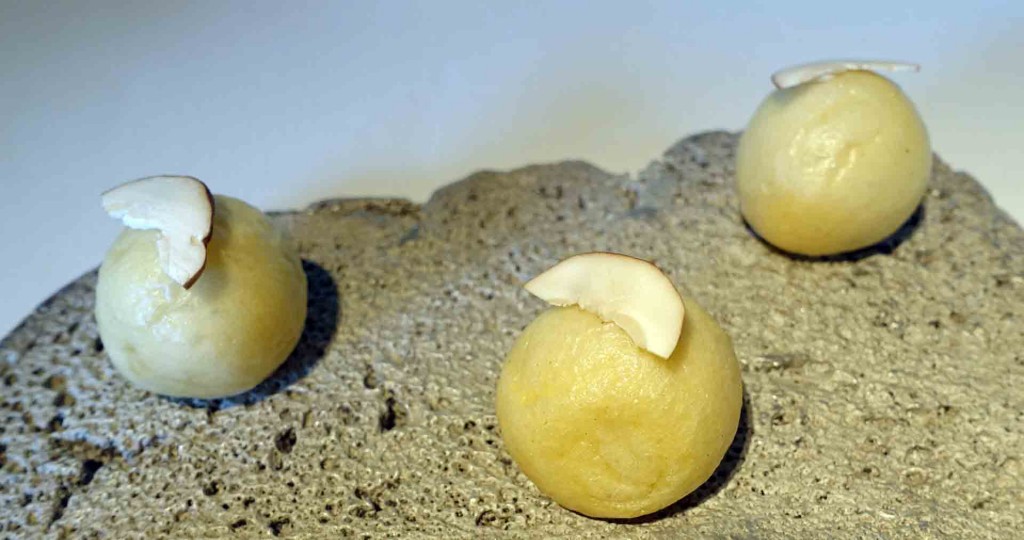 Although I’m not a fan of the after-taste or texture of the bon bon casing the liquid centre was intense and full of brilliant mushroom flavour. The brioche was light and fluffy and I could happily have eaten a few more!

Finally we hit the ‘mains’ – first up Autumn vegetable stock. 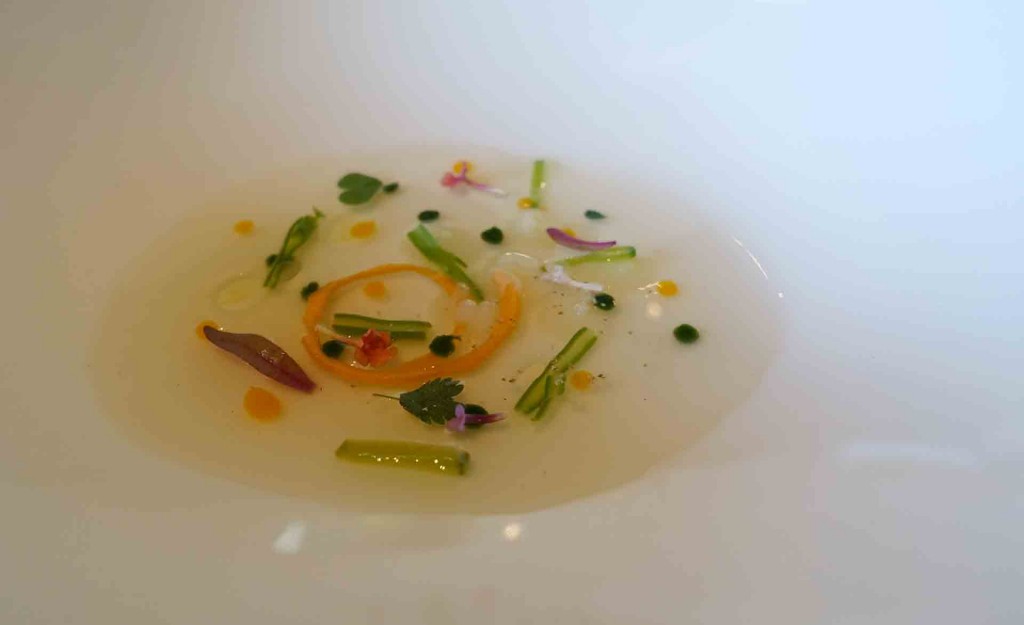 The soup of pistachio with cucumber, melon and pomegranate had a nice creamy texture but the taste of pistachio didn’t really come through in the soup itself which was a pity. 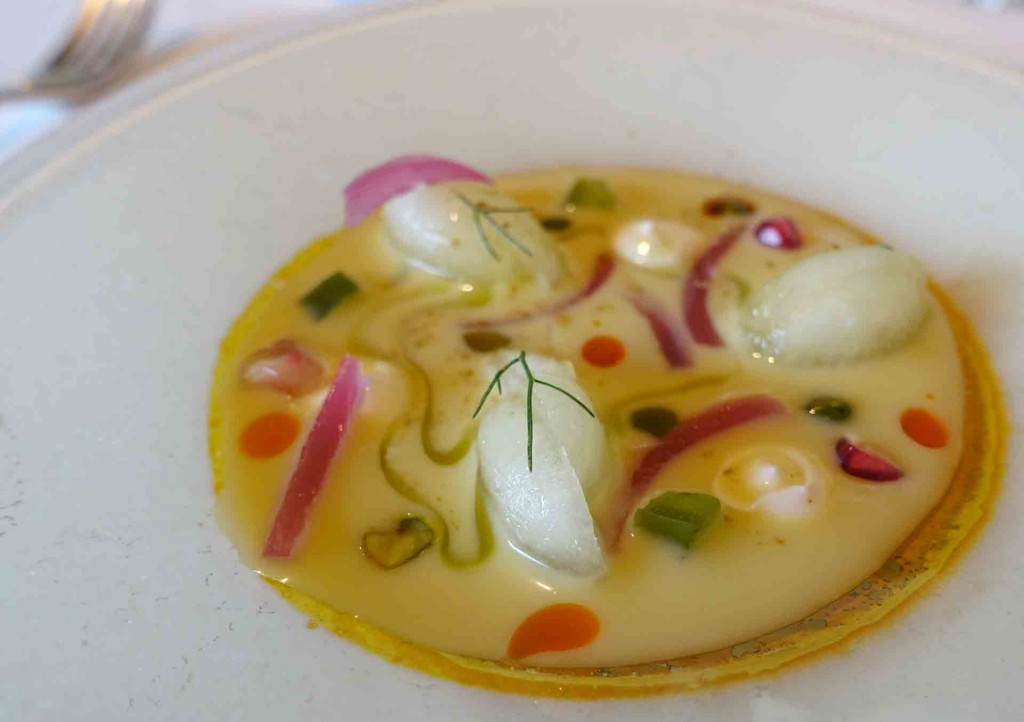 Next was “Ajoblanco” ice cream with meringue of Jerez, chlorophyll and sardine. 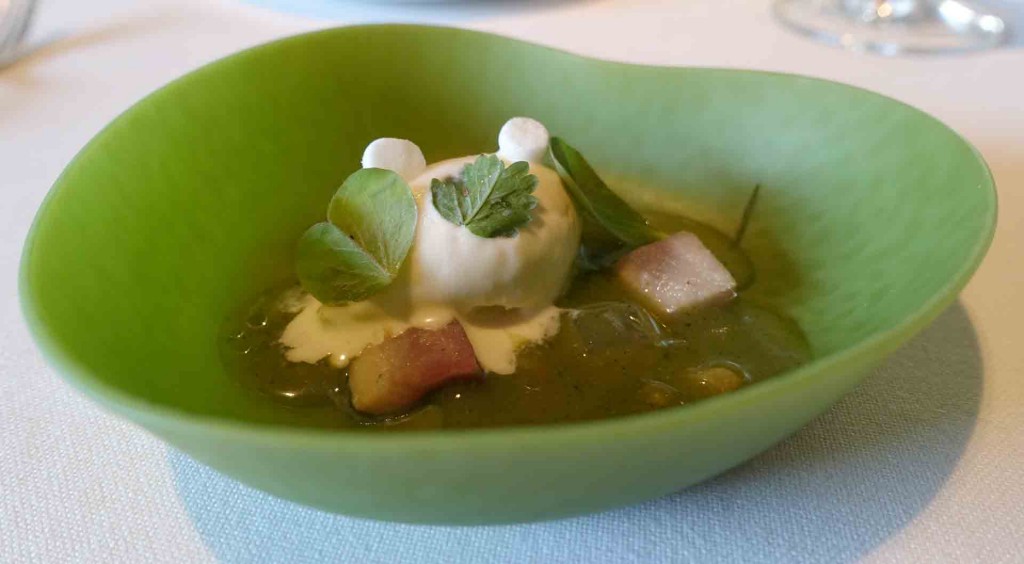 The different textures worked really well in this dish and the ice cream was really refreshing. However, I felt that the fish let this one down – as the flavour of the sardine (which is usually so intense) just really wasn’t there for me.

A stunning dish of Mackerel with pickles and mullet roe followed.

The fish was perfectly cooked and the sauces (which used all different parts of the Mackerel) were delicious.

The prawn marinated with rice vinegar was the best of the fish the day for me. 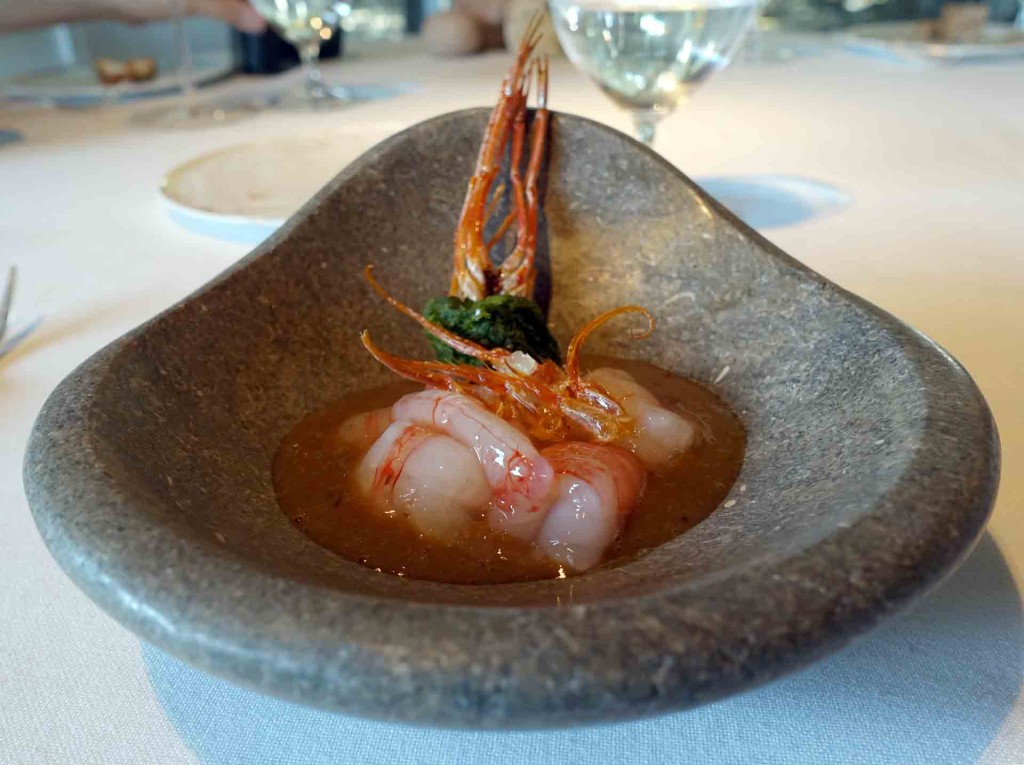 The prawn was sweet and juicy. It was accompanied by phytoplankton; an interesting and unusual addition, which definitely tasted good for you…

As I’m allergic to oysters I had a dish of sea cucumber instead. 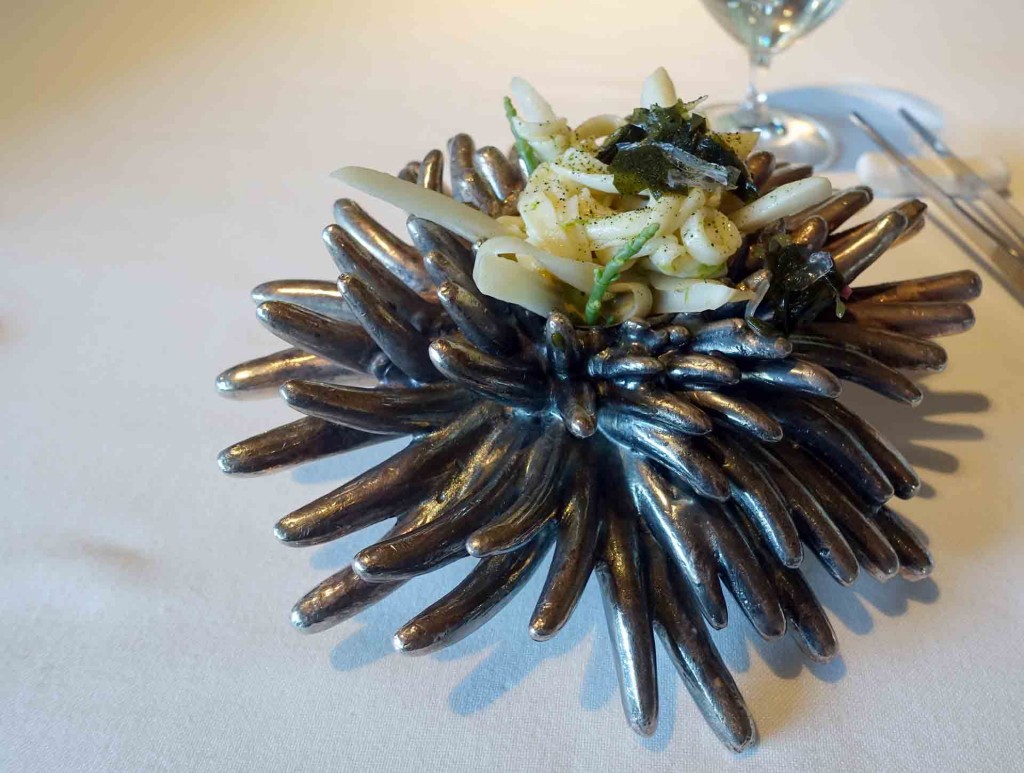 Not something I would usually opt for but I’m glad that it was chosen for me as this dish was delicious – just the right amount of crunch with a rich sauce underneath. 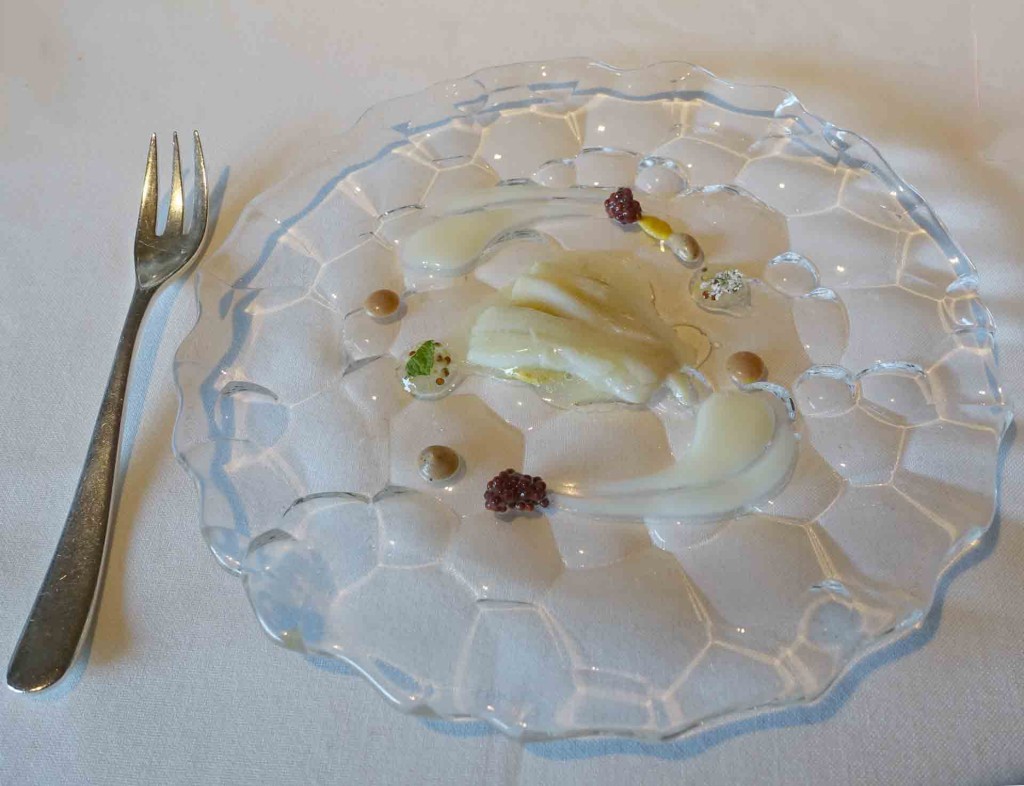 The fish was very well cooked and melted in the mouth. Each sauce was very distinct – I particularly enjoyed the aromatic mustard one and would have been happy with a larger portion of just that. 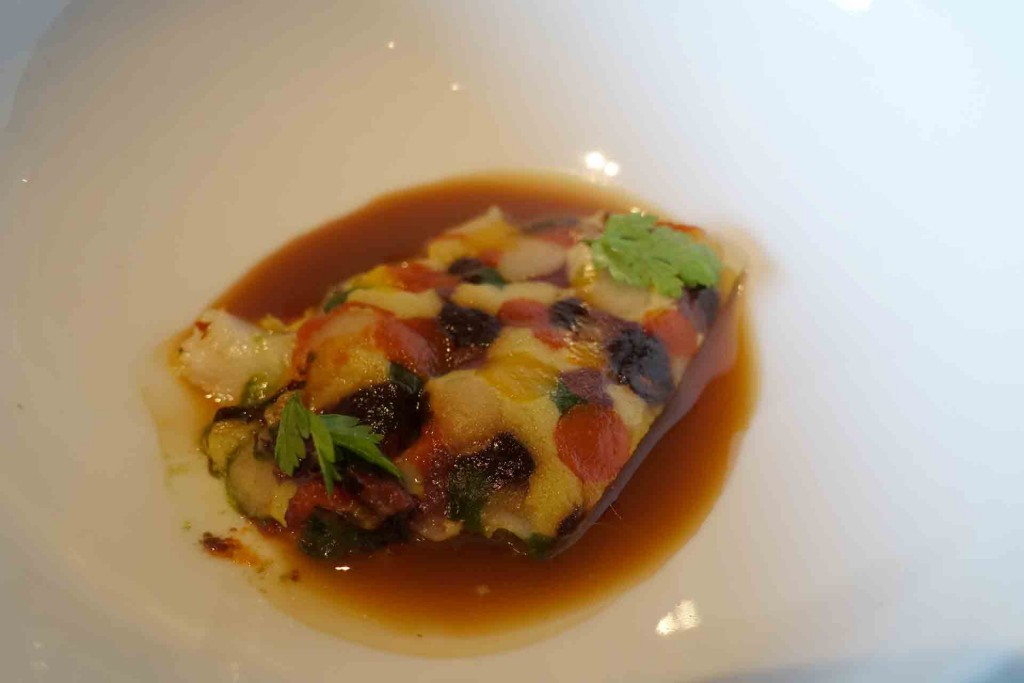 Again a very well cooked piece of fish. The ratatouille topping had been beautifully arranged but I wasn’t a huge fan of the texture which was, in my opinion, a little too smooth and refined for ratatouille. 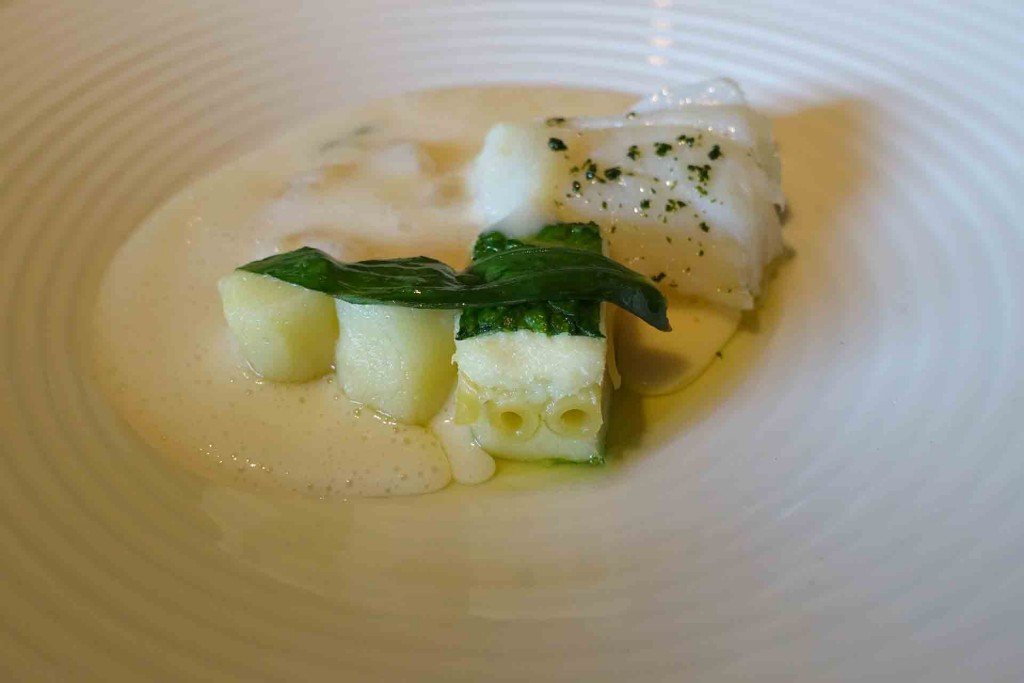 The terrine was particularly delicious with a soft but not mushy texture and the fish just on the right side of salty.

As I don’t eat pork the kitchen kindly went off menu and served me rice with mushrooms. 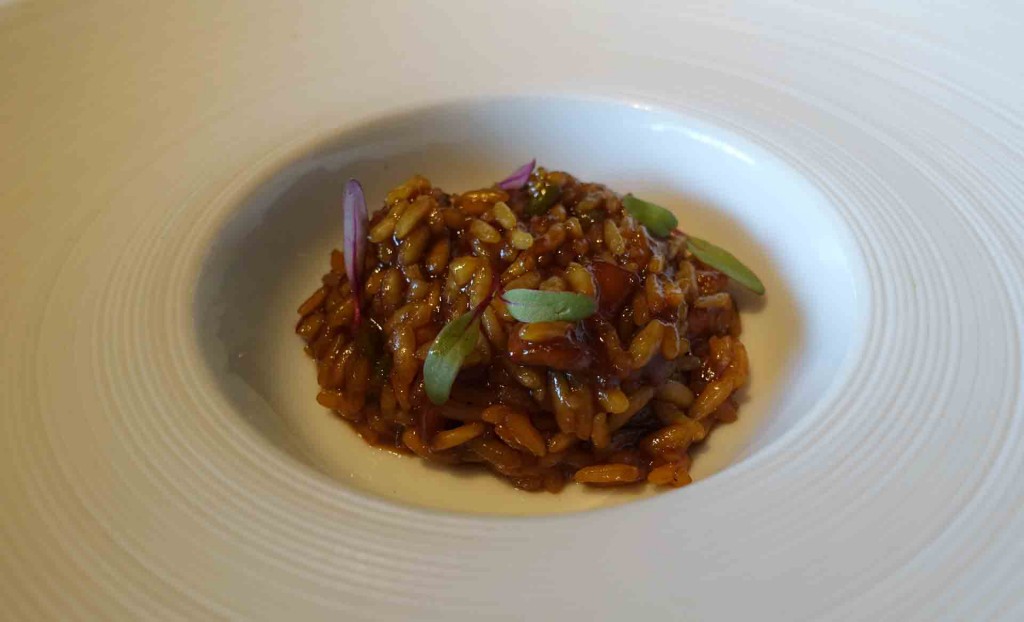 This dish was absolutely delicious – possibly the best of the meal for me. The rice was just on the right side of al dente and the sauce so full bodied; just bursting with rich mushroom-y flavours. 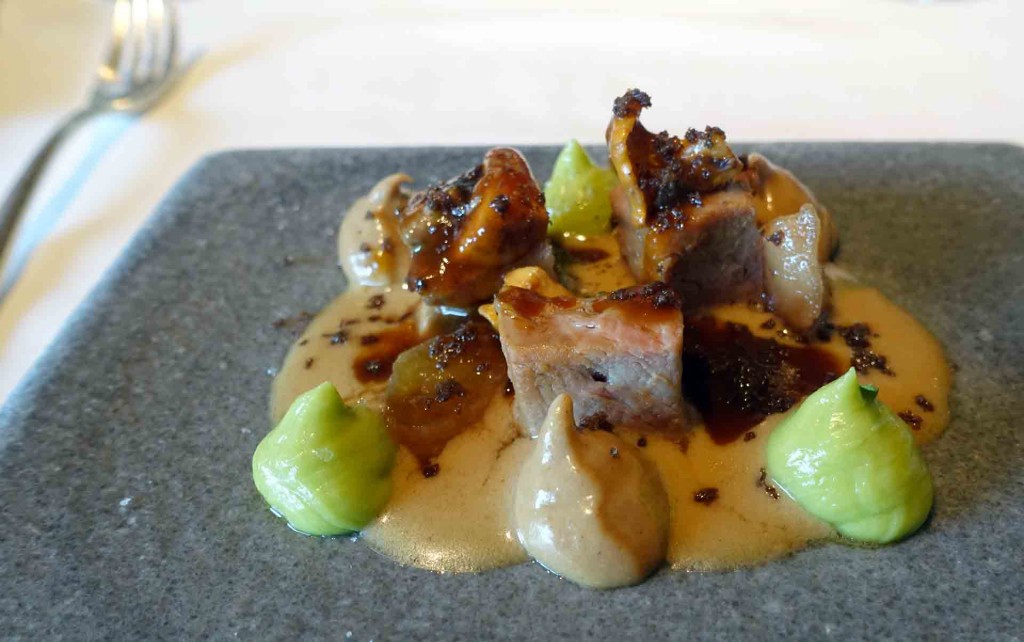 I’m not usually one for veal but feeling I couldn’t be too fussy about the menu I didn’t change this course. And I’m very happy I didn’t – even though I was almost full to bursting by this point in the meal – the meat just melted in the mouth and the accompaniments went really well.

The first dessert was ‘Suspiro Limeno’. 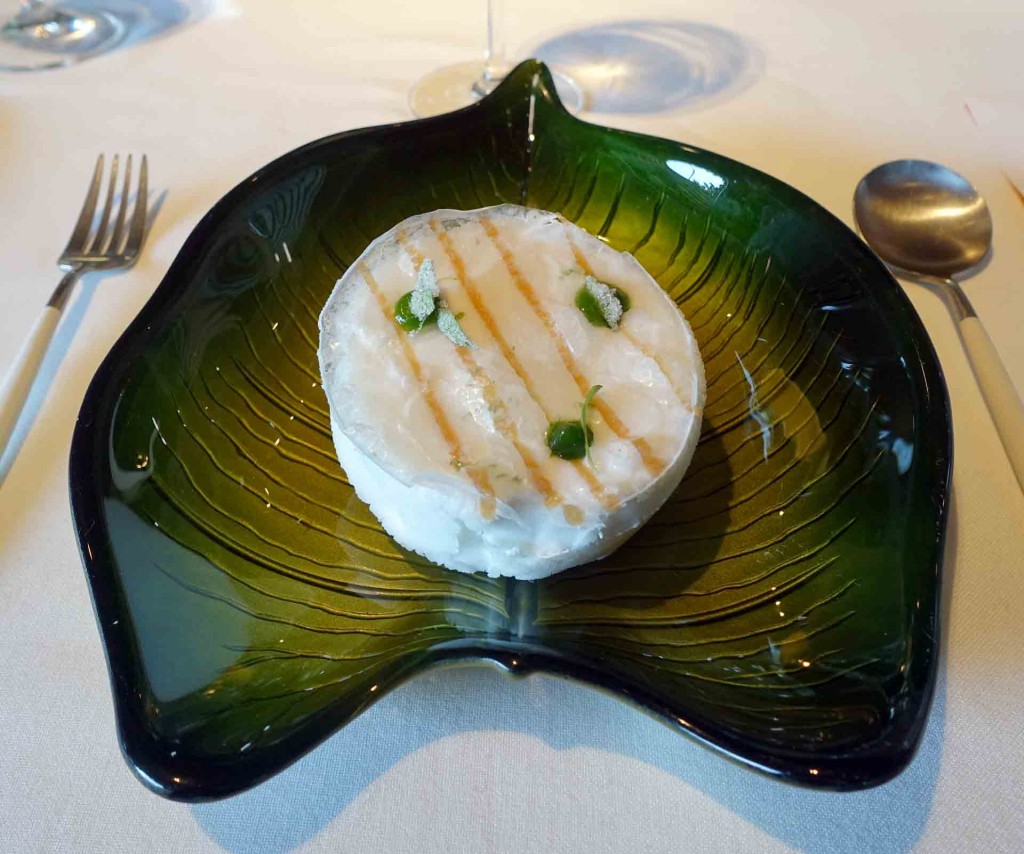 The Roca take on this Peruvian dessert was, I’m glad to say, very different to the traditional recipe which includes a lot of cream and dulce de leche. The dessert was in fact very refreshing with a sort of shaved ice texture to it and a delicious flavour of fresh lemons.

Our second dessert was ‘Turkish Perfume’ 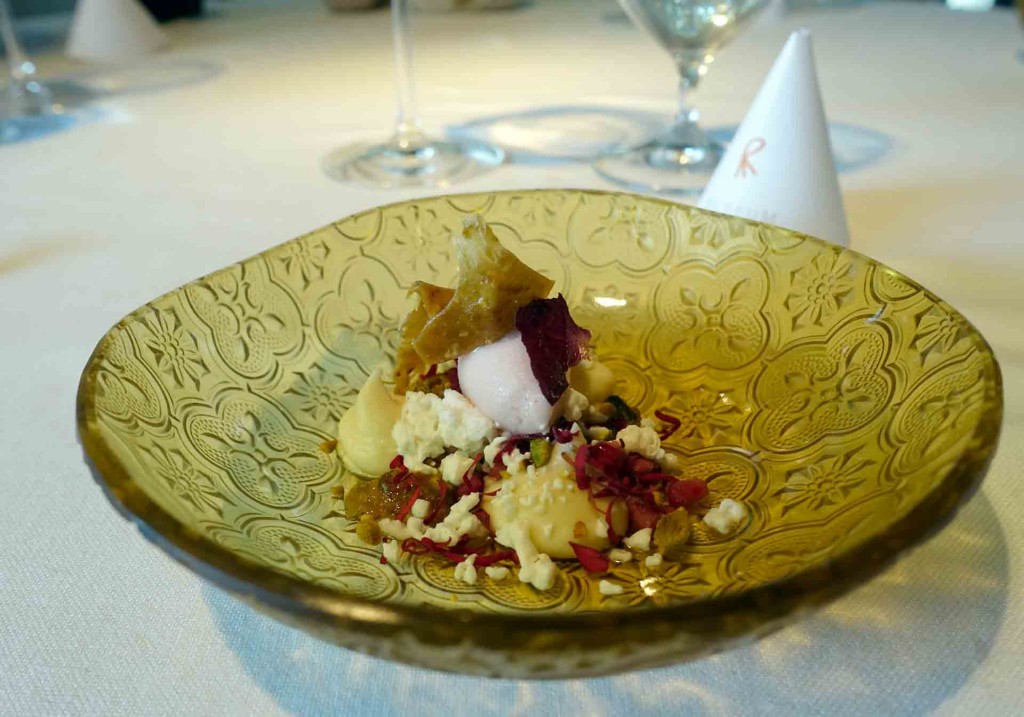 A nice mixture of textures and flavours (albeit very floral so probably not to everyone’s taste). We were also given a cone with some very strong perfume to smell however the concept wasn’t explained to us by the waiting staff so I’m still not sure what the chef’s were going for with this one and how the perfume added to the dish/what flavour’s it was meant to enhance etc

The final dessert was ‘Orange Colourology’ 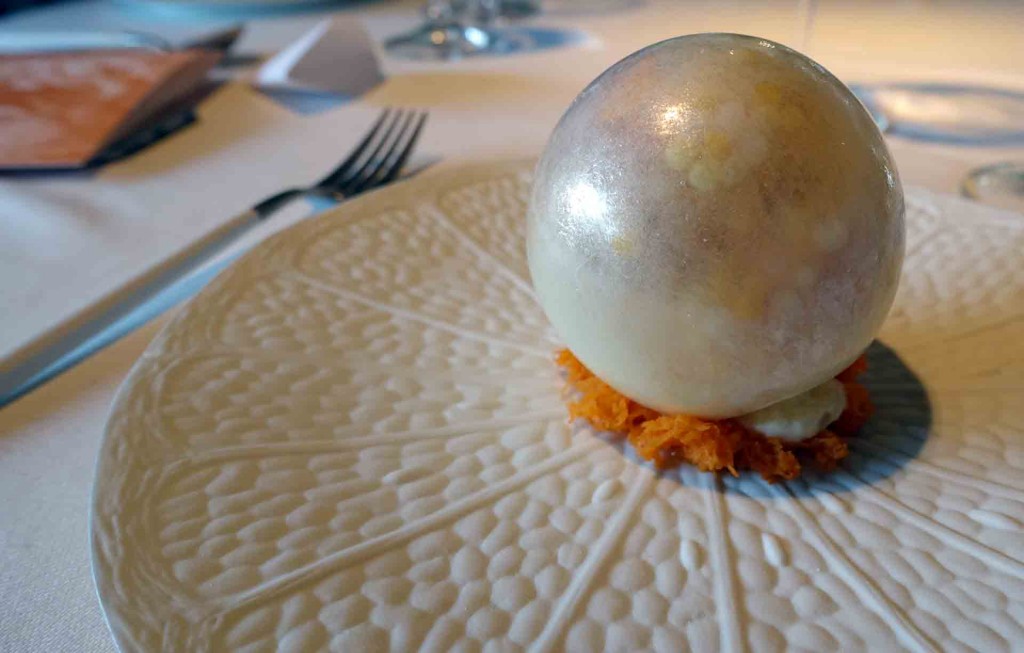 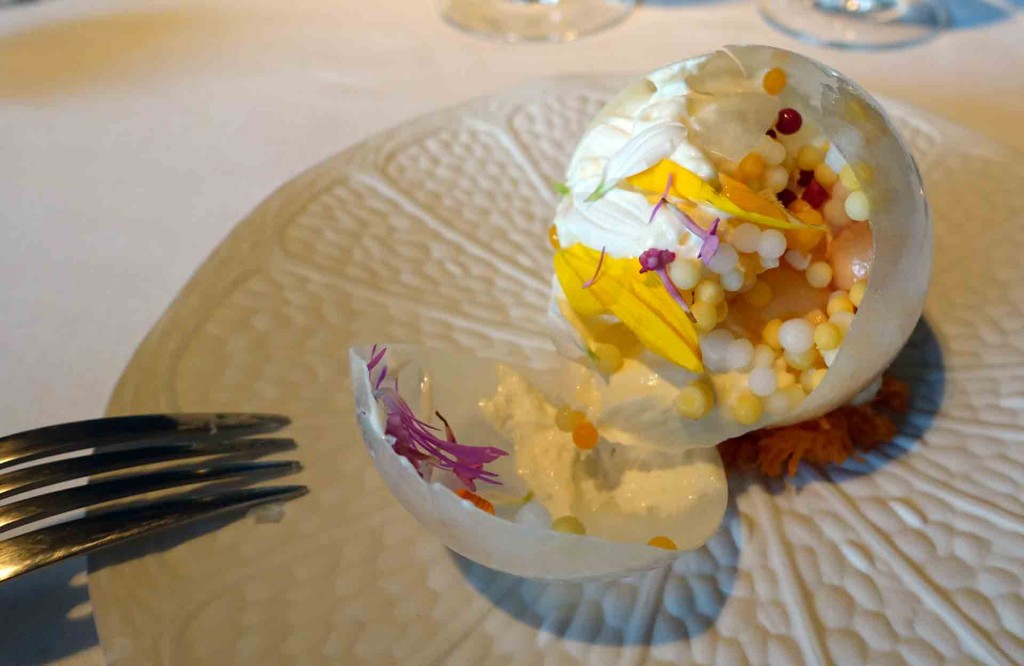 A beautiful pudding both in appearance and flavour. I particularly enjoyed the different textures of the crunchy sweet shell, icy fruit balls and orange cream which meant each bite was different.

The presentation of the dishes throughout our meal at El Celler de Can Roca was stunning and there were some really intense and delicious flavours amongst the dishes and wonderful cooking so it is easy to understand why this restaurant is so lauded. And while there was no denying the inventive menu and exciting foreign influences throughout, for me, at times, it all felt a bit disconnected; although we felt that perhaps this sense of disconnect was because the staff weren’t wonderful at explaining the dishes and the thoughts behind them rather than the food itself.