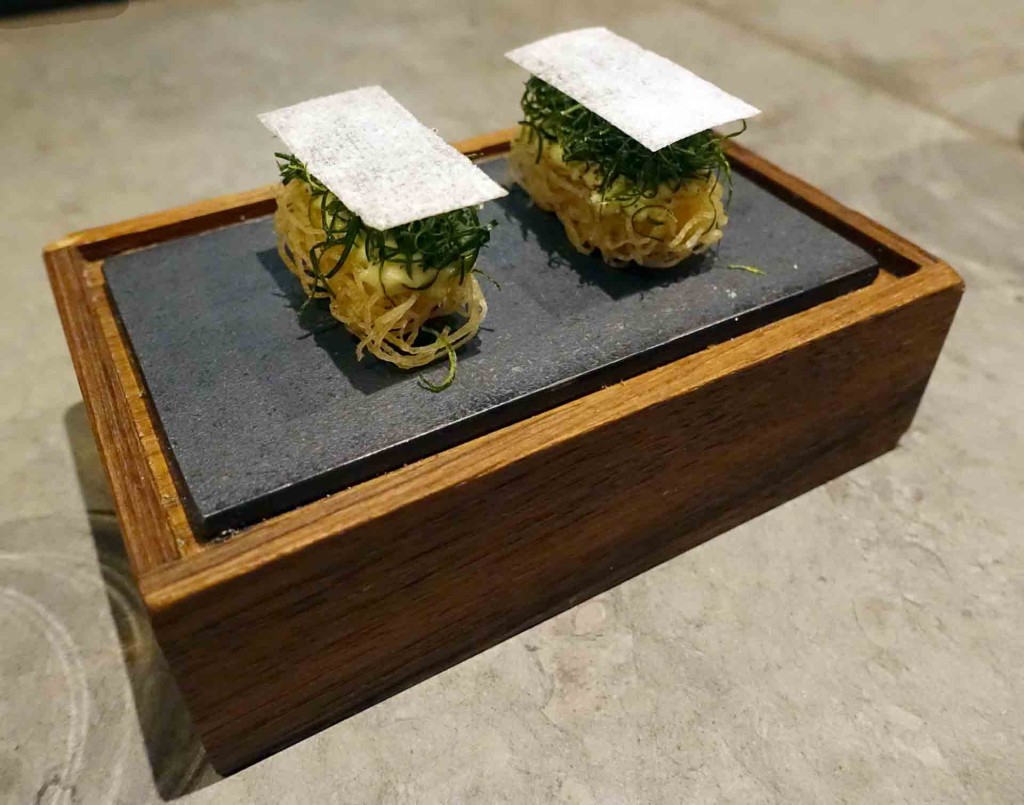 As mentioned in Friday’s post about the glories of Stockholm (here), as well as running around the city like headless chicken’s trying to explore everything in the short amount of time we had, we also ate ourselves a little silly. Not hard to do in Stockholm which seems to have cafes, restaurants and bakeries offering delicious morsels at every turn…but if you’re looking for a more gourmet experience do not miss out on Frantzen.

The fare offered Restaurant Frantzen comes under the new Nordic umbrella. The restaurant uses a lot of local Swedish ingredients but there is a clear Far Eastern influence in a lot of the dishes; perhaps why I found it much the tastiest of all the Scandinavian fine dining I’ve had the opportunity to taste so far.

We started with a series of small bites.

The first (which can be seen above) was crispy shredded and fried potato with Tsarskaya oyster, vinegar, dried caviar and leek. This cruchy bite was a deeply satisfying start and a sign of the inventiveness of the meal to come.

Next was a saffron and cinnamon macaron with caramelized lemon and Medjool date (also meant to include foie gras but as that’s not really my thing they left it out). 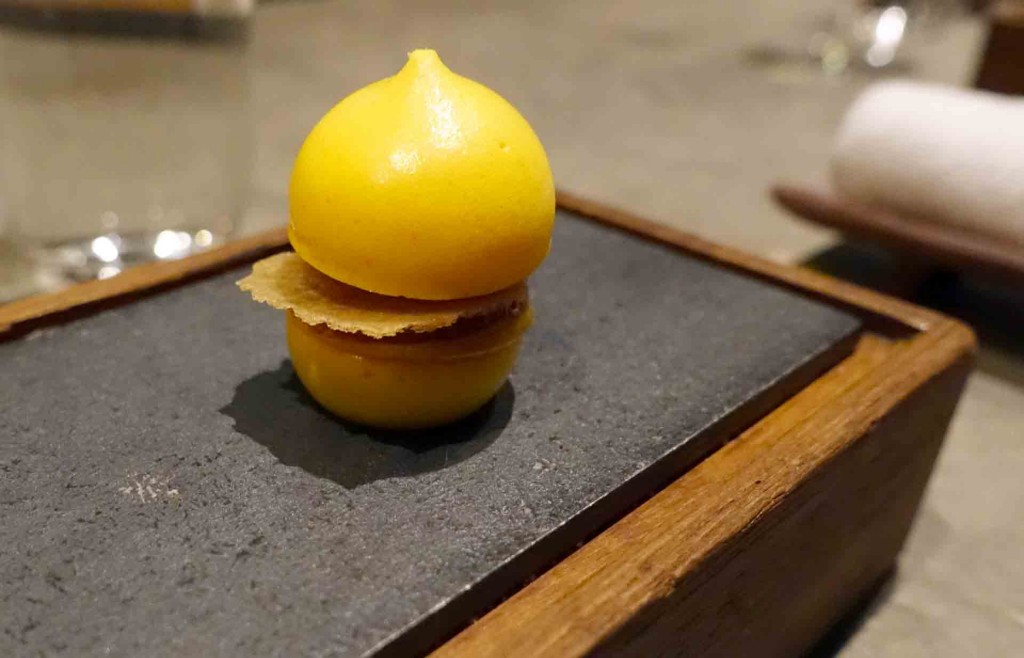 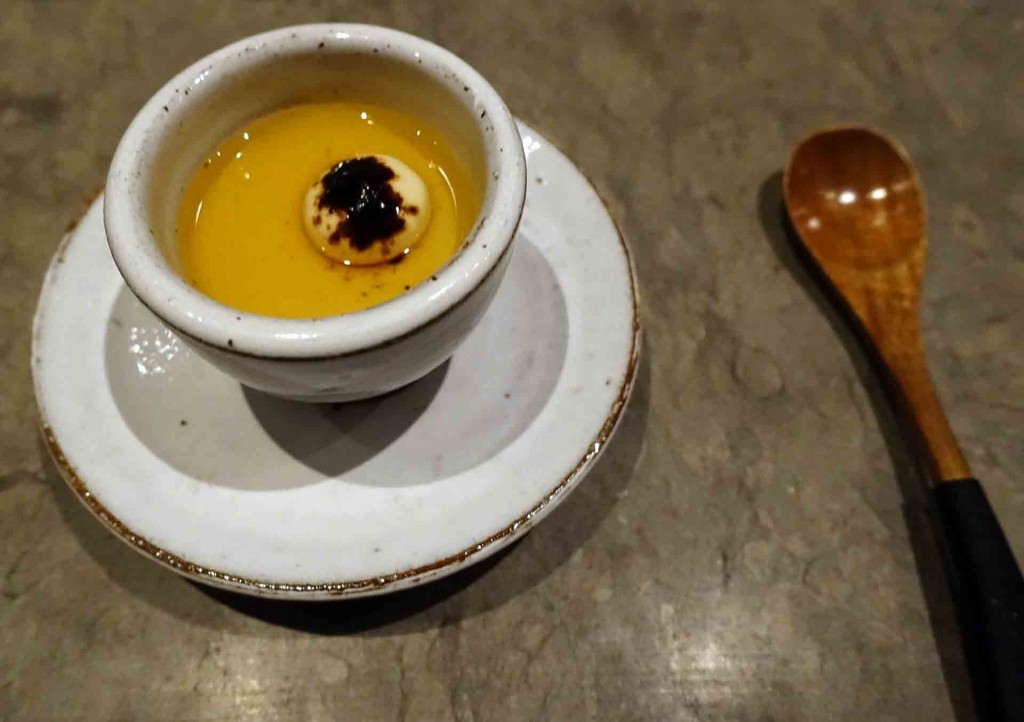 Chawanmushi is a savoury egg custard dish that is commonly found in Japanese kaiseki. I’m not usually a huge fan of it this dish but the onion flavour was stunning and stopped the dish from being too creamy.

The batter on this was perfectly light and allowed the flavour of the langoustine to come through. Again the textures of this dish was really satisfying.

The next bite (Horse sushi with hay, smoked white moss and frozen raw duck liver) demonstrated the Japanese influence once again but with such a clever twist as it really wasn’t sushi at all. 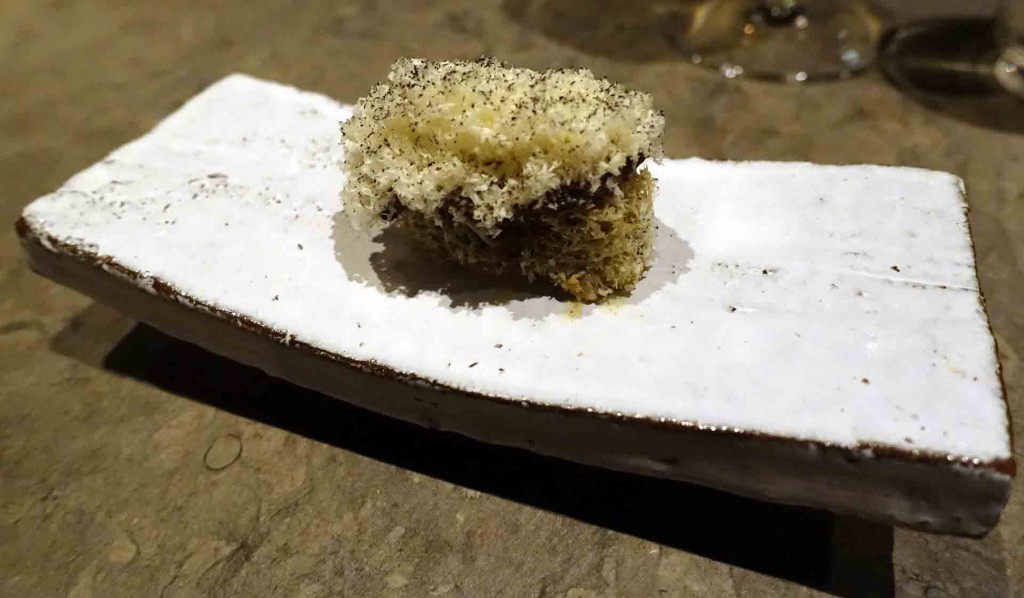 I wasn’t very sure about eating horse but the deeply smokey flavour of this bite was delicious. I found Frantzen’s play on sushi really clever and the blend of textures and temperatures very interesting. 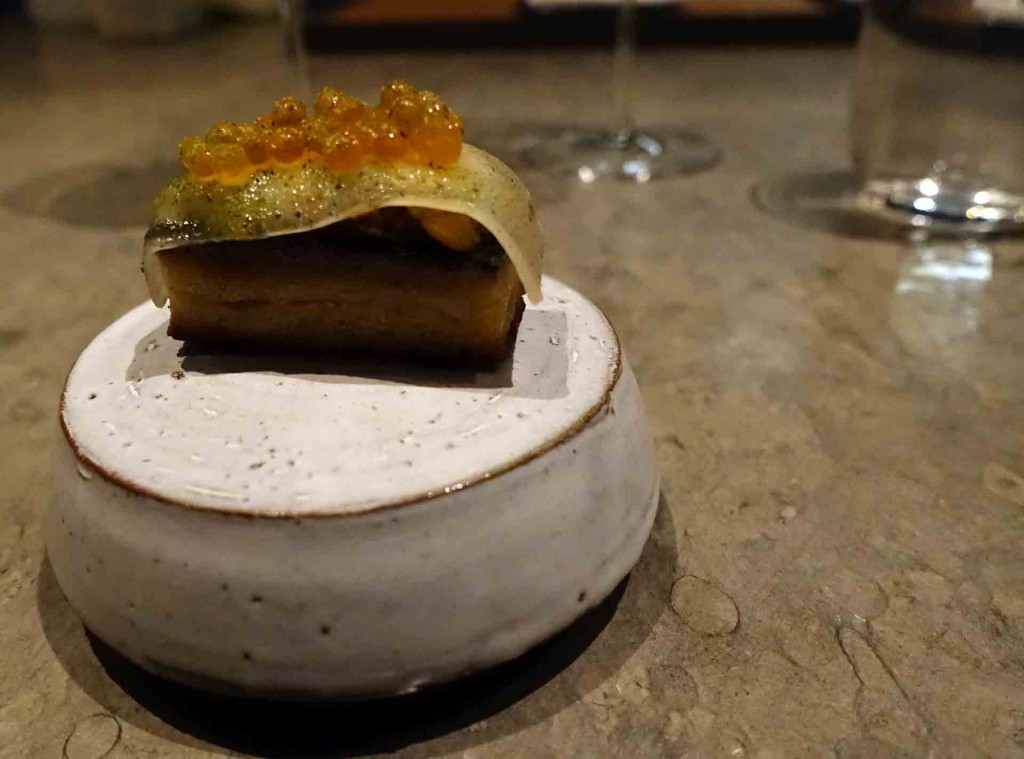 I’m afraid my camera doesn’t do justice to dish at all – the layering of the french toast was a lot more beautiful that the above gives it credit for. And as for taste, I usually detest uni so I was surprised to actually quite enjoy this dish and my uni and the way it melted into and melded with the toast. 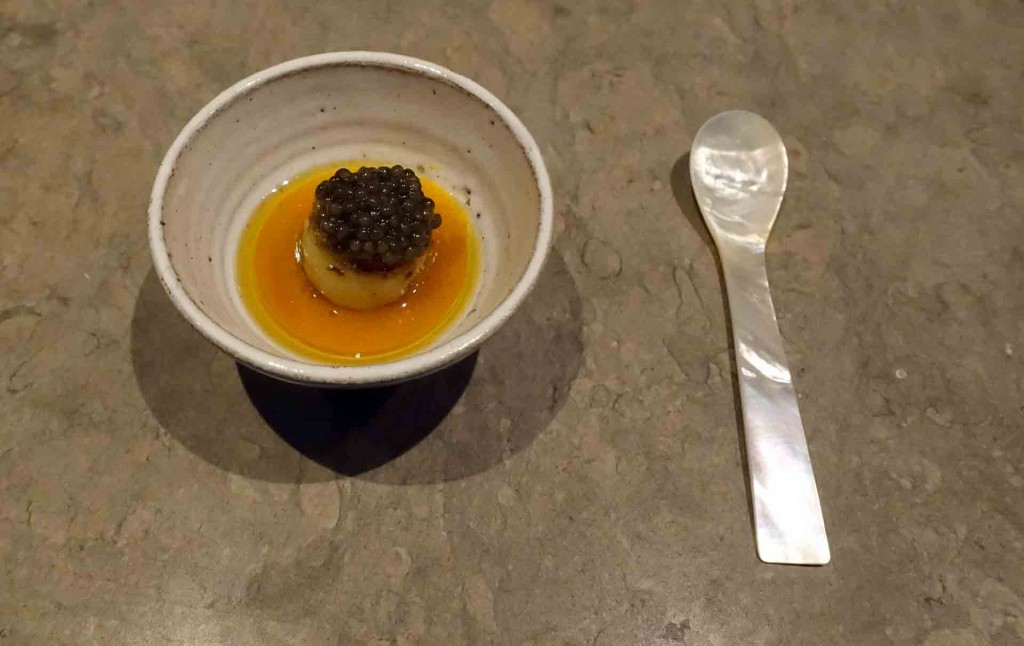 The pumpkin had such dept of flavour and were really comforting. And the salty caviar (spooned on with flair from a huge jar) a delicious treat.

Next was fermented rye bread soup with creme fraiche (and bacon for those sticking with the original menu). 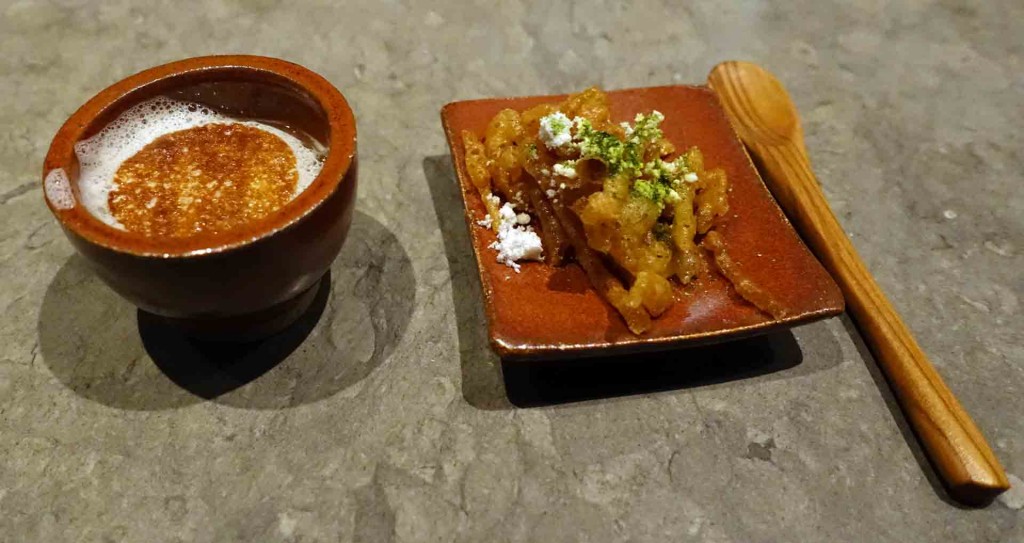 As the meal went on I realised that Frantzen and I have a love of crunch in common – I always find a dish more satisfying when there is something to bite on and lots of the dishes at this restaurant seem to incorporate a blend of textures.

Scallop with whipped eggs, truffle and dashi was the first of our mains and definitely one of my favourite dishes. 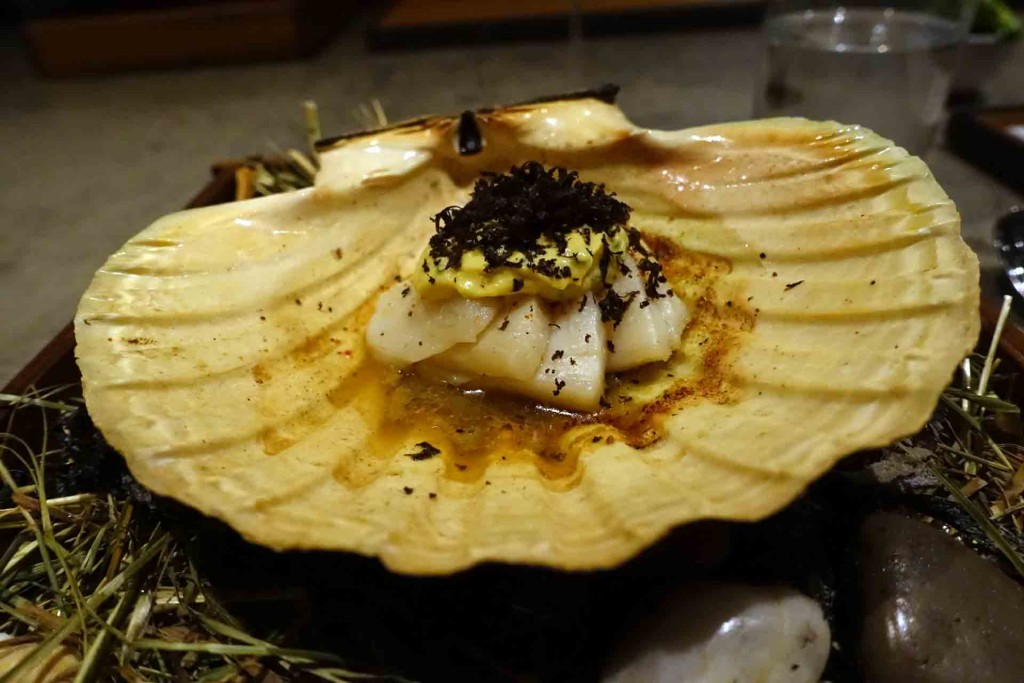 The scallops were so juice and fresh (my mouth is watering thinking about it again), the whipped eggs added just the right amount of richness without overpowering and the dashi (a fish broth traditionally used in Japanese cooking) was light and flavoursome; rivalling that of some Japanese establishments I’ve eaten in.

The next main dish was the signature ‘Satio tempestas with butter “a la minute”, biodynamic grains and toasted seeds’. 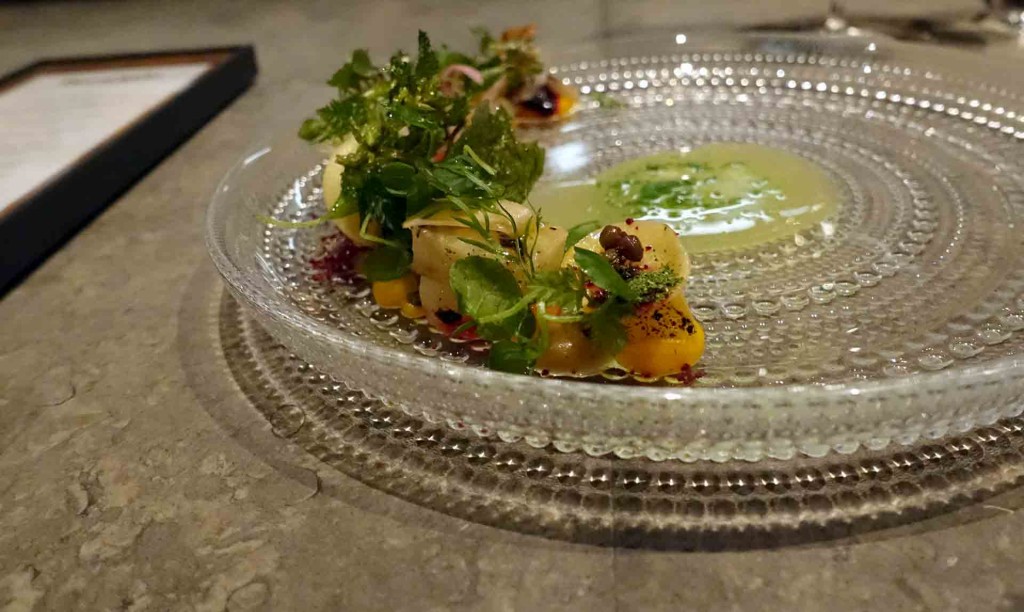 This salad combines a mine boggling forty three seasonal ingredients (including Chioggia beet, chickweed, yellow dead nettle, kombu) all of which are taken from the two Frantzen gardens. Colourful and delicious…this dish almost rivalled the salad at Jimbocho Den.

The Skrei cod in two parts started with the skin with confit cheeks, horseradish, yogurt and reduced apple juice was good. 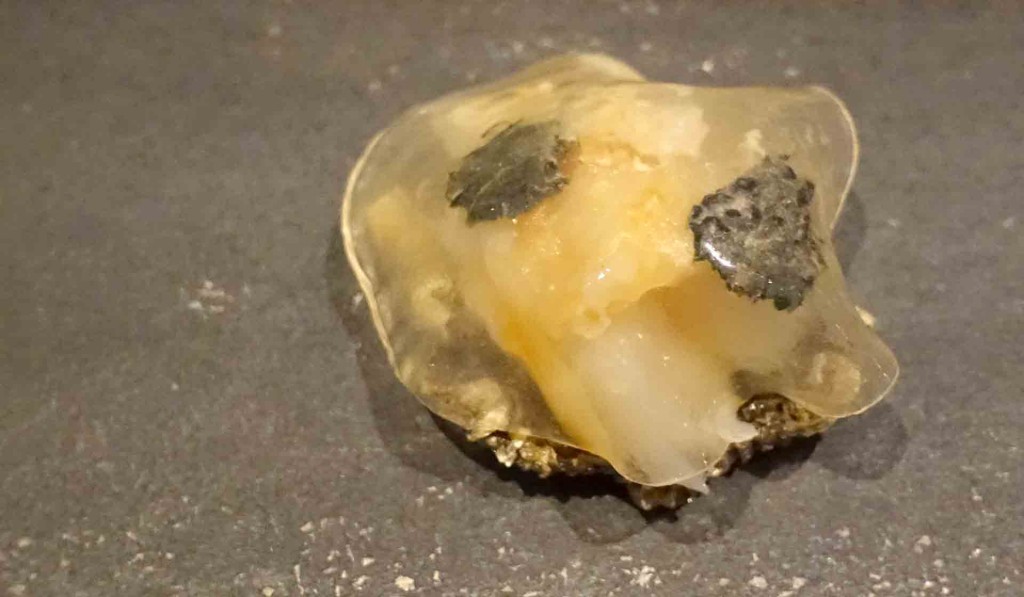 But the second part was incredible. 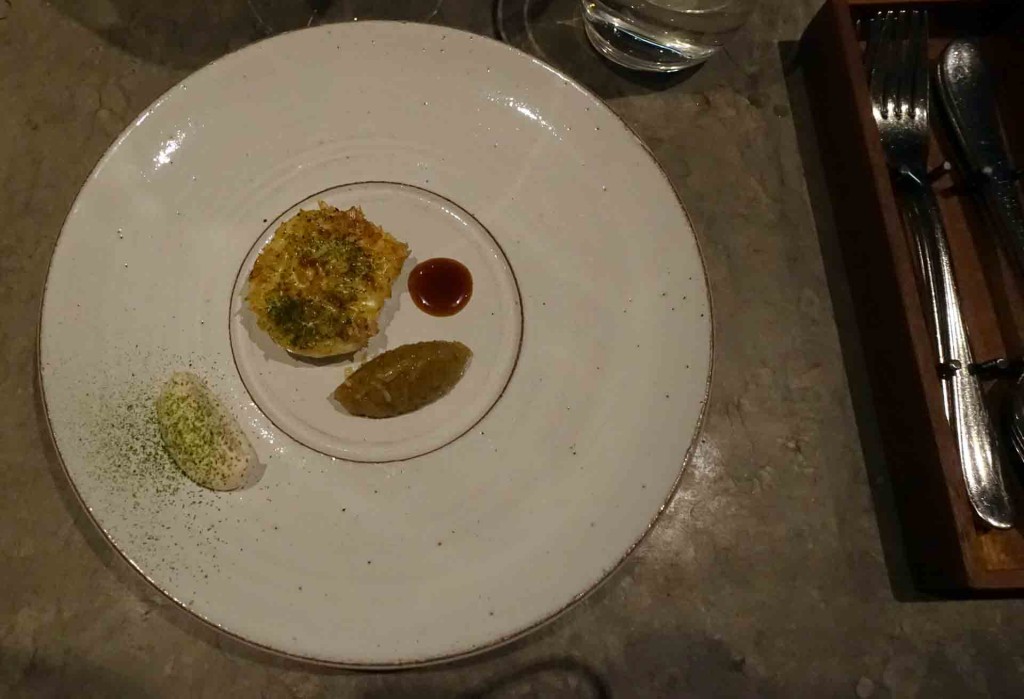 Caramelized loin glazed with a reduction of grilled bones and white soya with smoked roe and fried scales. The cod flesh was so soft it melted in the mouth and the slightly sweet glaze a perfect flavour addition.

The final savoury dish was a “hot-pot” of lobster with cabbage, roasted cauliflower and perigord truffle bouillon followed. 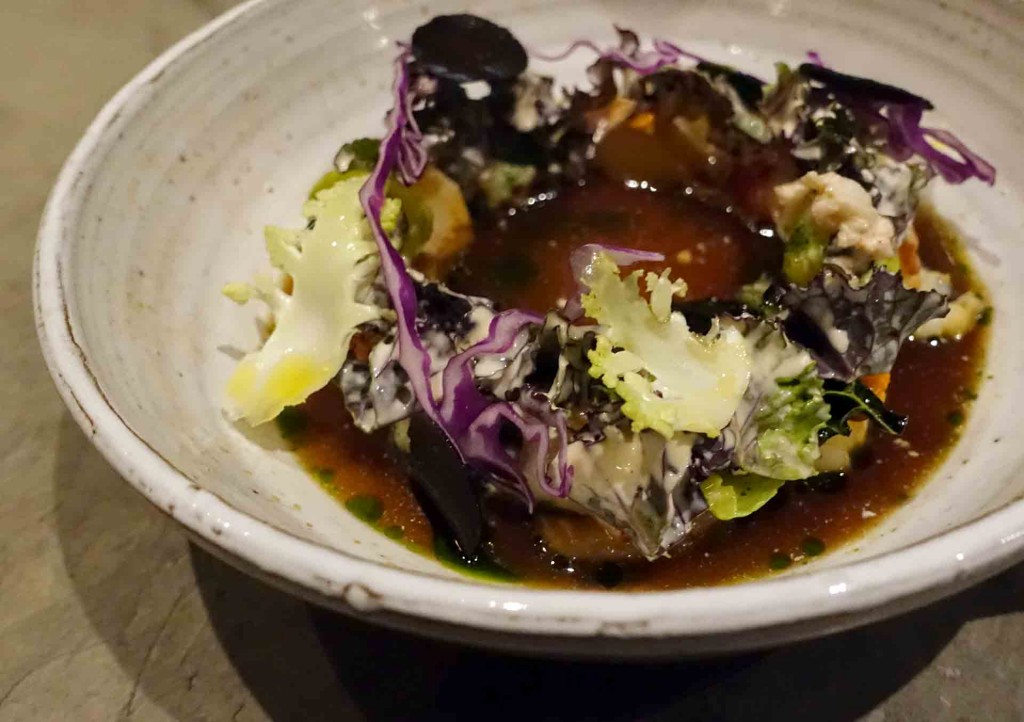 I didn’t feel that the lobster was flavoursome enough to stand up to the truffle bouillon (and as I don’t get the fuss with truffles that slightly ruined the dish for me) so maybe it would have been better to go for the lamb option which doesn’t have such a delicate flavour. 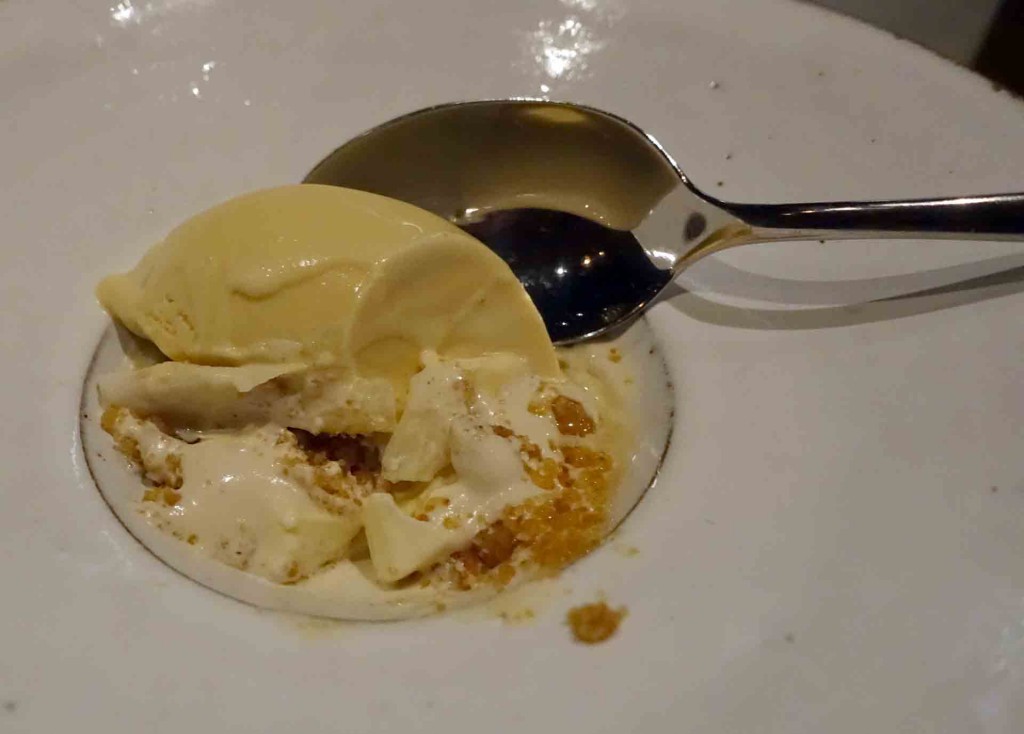 As you know I’m not a fan of overly creamy dishes but the chestnut flavour was delicious and the crunch of the ginger cookie saved it for me. 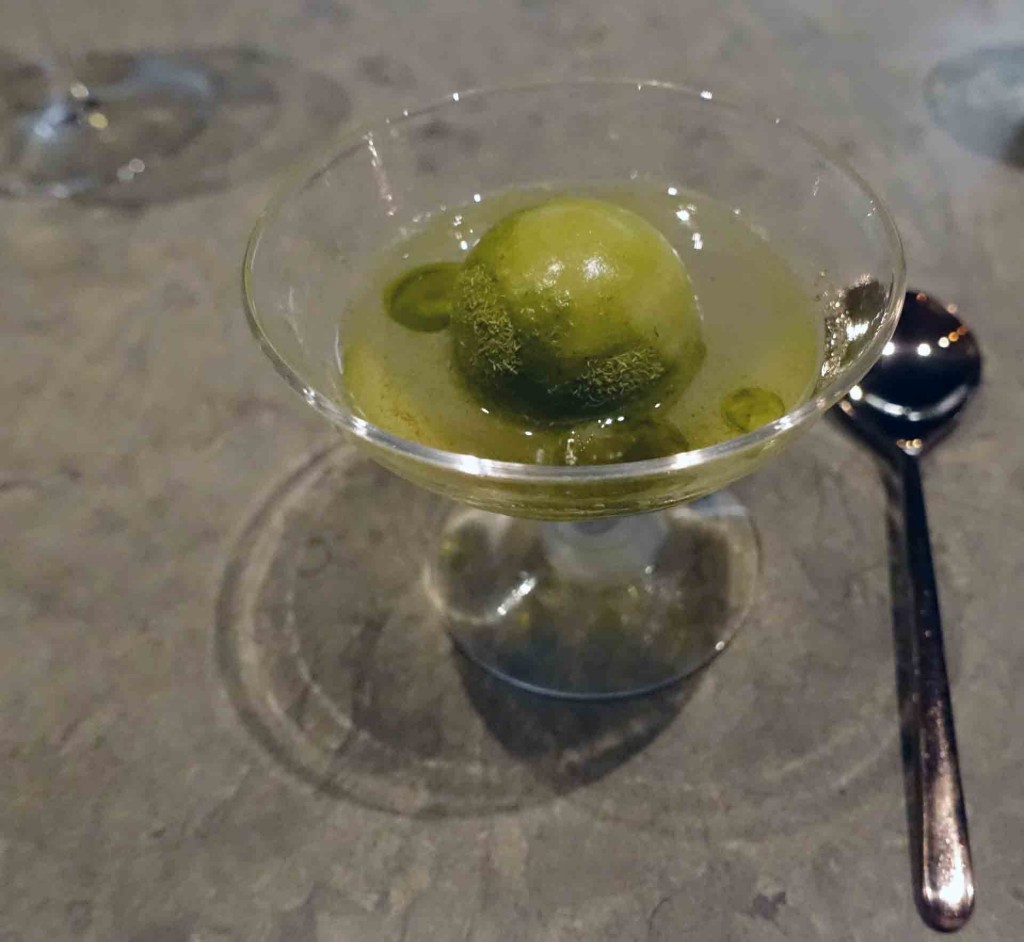 I loved this refreshing and light end to the meal.

Accompanying our coffees (or fika) was a bento box of chocolate-y goodies. 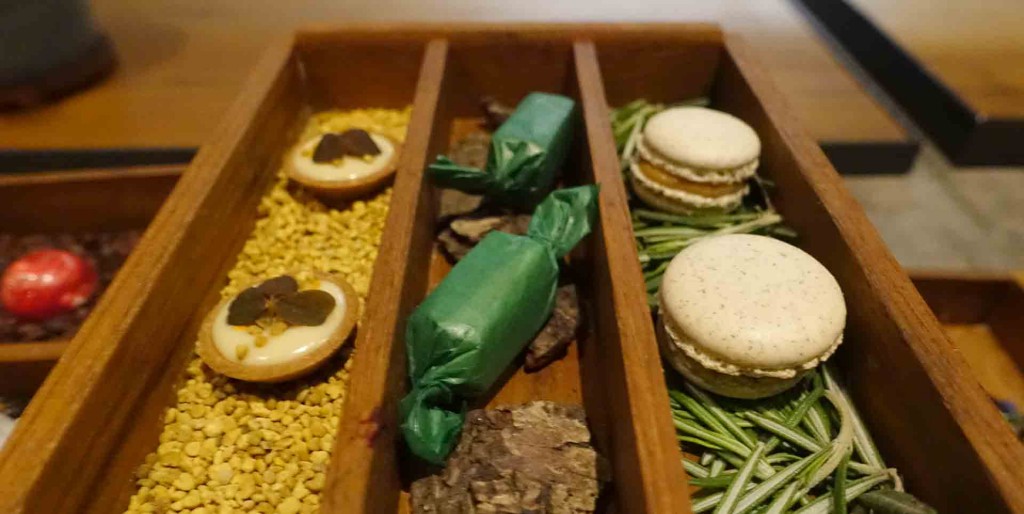 This restaurant definitely deserves its two Michelin stars. The food was experimental but delicious, perfectly prepared and beautifully presented.

We sat at the bar, which I would really recommend, as you get a fantastic view of the food being cooked and assembled. It also gave us a great chance to chat to the very friendly chefs about the dishes and the thoughts/influences behind them. The service also deserves a nod as they were so kind and attentive but without being overbearing. All in all, definitely worth booking if you’re visiting Stockholm and want a taste of its haute-dining scene.

One thought on “Frantzen – a review”