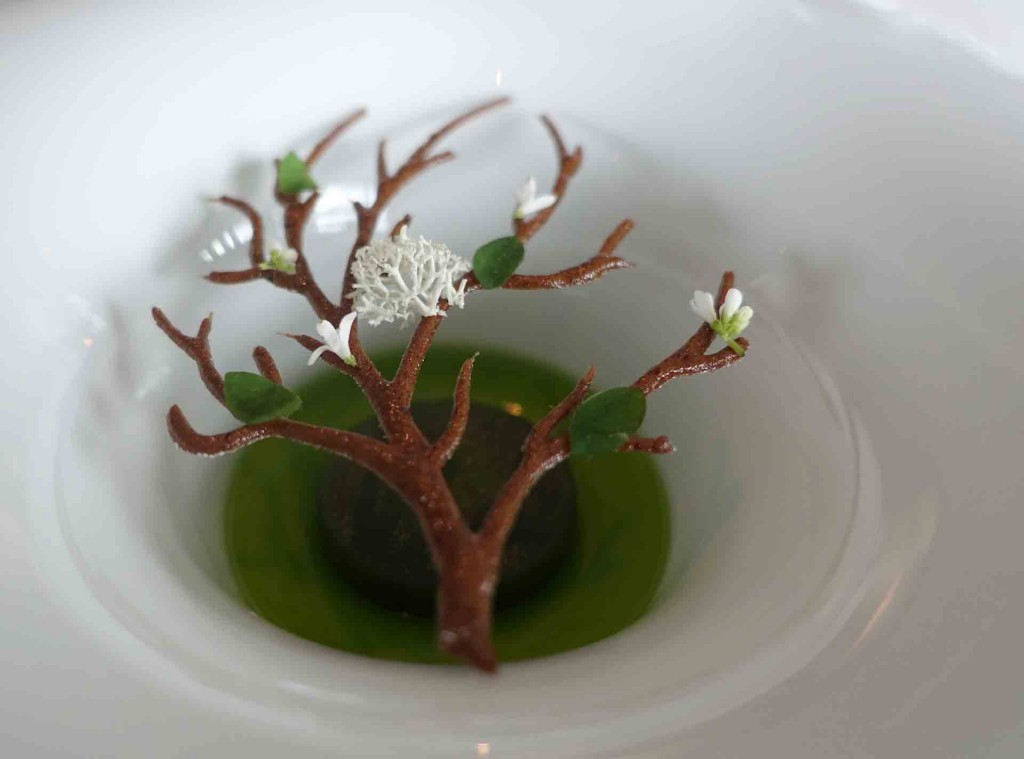 Last weekend I returned to Denmark for a very special wedding but made sure to take advantage of returning to Copenhagen and another friend’s birthday to try another of it’s top rated restaurants – Geranium.

Headed up by Rasmus Koefed, Geranium has, like Noma, two Michelin stars yet is doesn’t seem to be as widely known. While, in my humble opinion, this is something that should change I’m not sure I really want it to! It was much more manageable to get a reservation at Geranium and yet, for me, the food, while less challenging, was more enjoyable and just as beautifully presented.

The restaurant is light and airy with great views over the Common Gardens so I would recommend a lunch time reservation. The decor shows off Scandinavian design at its best – clean lines, muted colours and original details. 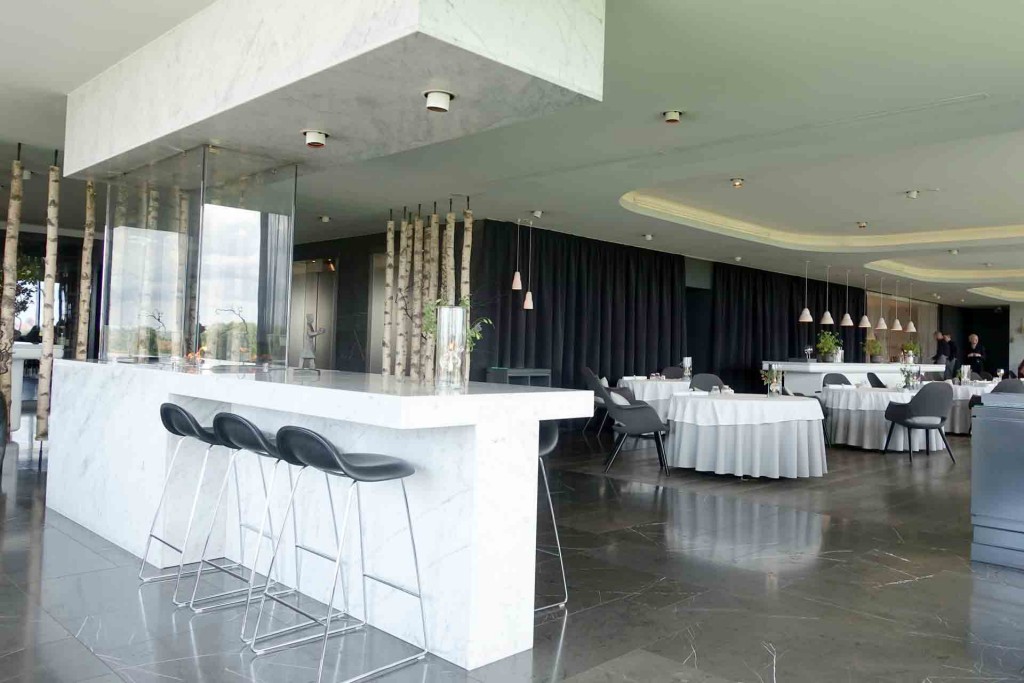 We opted for Geranium Dishes menu which started with a whole load of “snacks”, the first of which were crackers made of cheese… 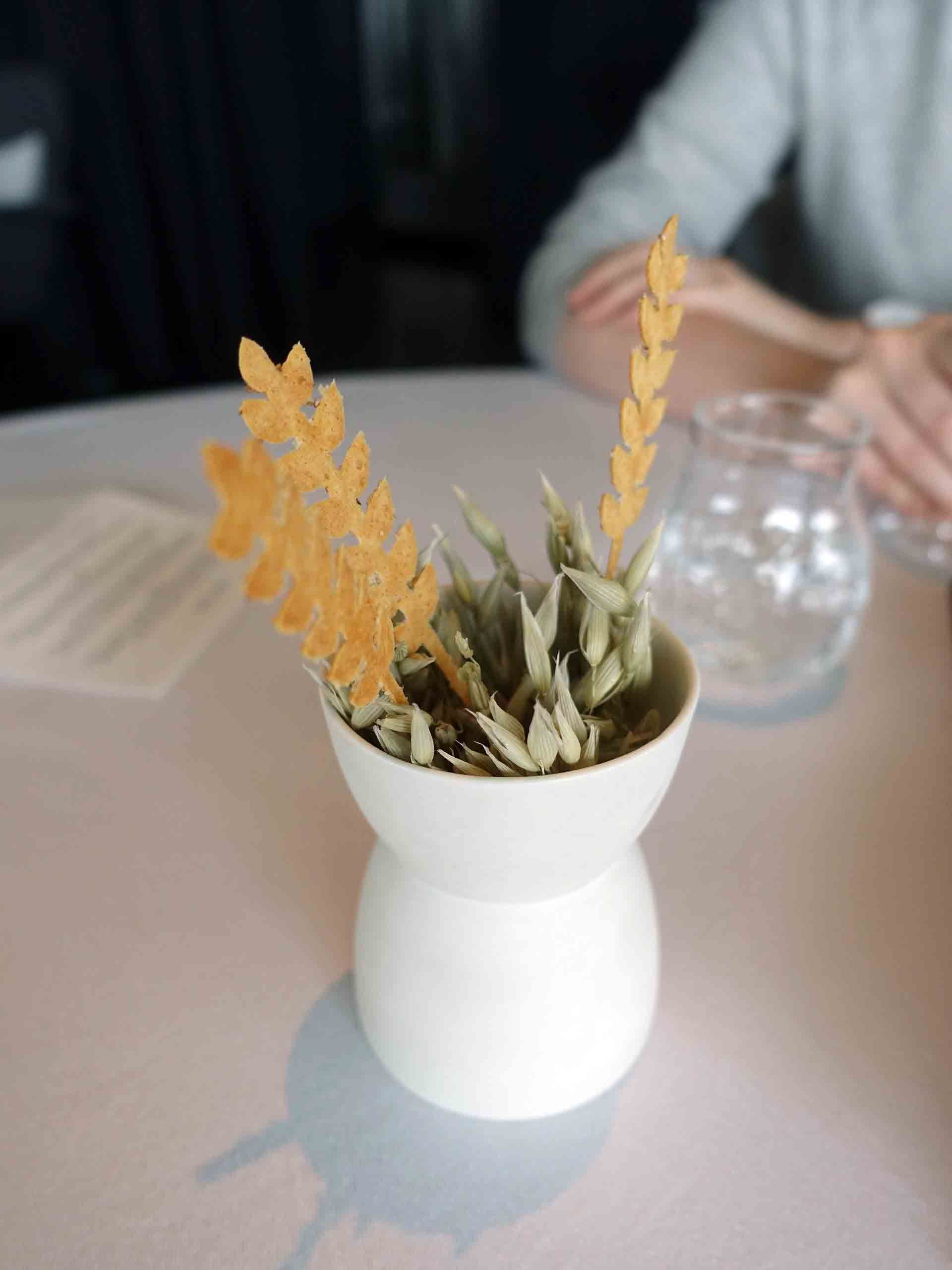 Perfectly formed and cooked – a hint of the attention to detail to come.

Our second dish was a candied carrot shell filled with seabuckthorn (a flavour that I was introduced to last time I was in Copenhagen and really love). This was served with a bowl of milk mixed with fermented juice from carrot, tender pieces of crab and sea buckthorn oil. 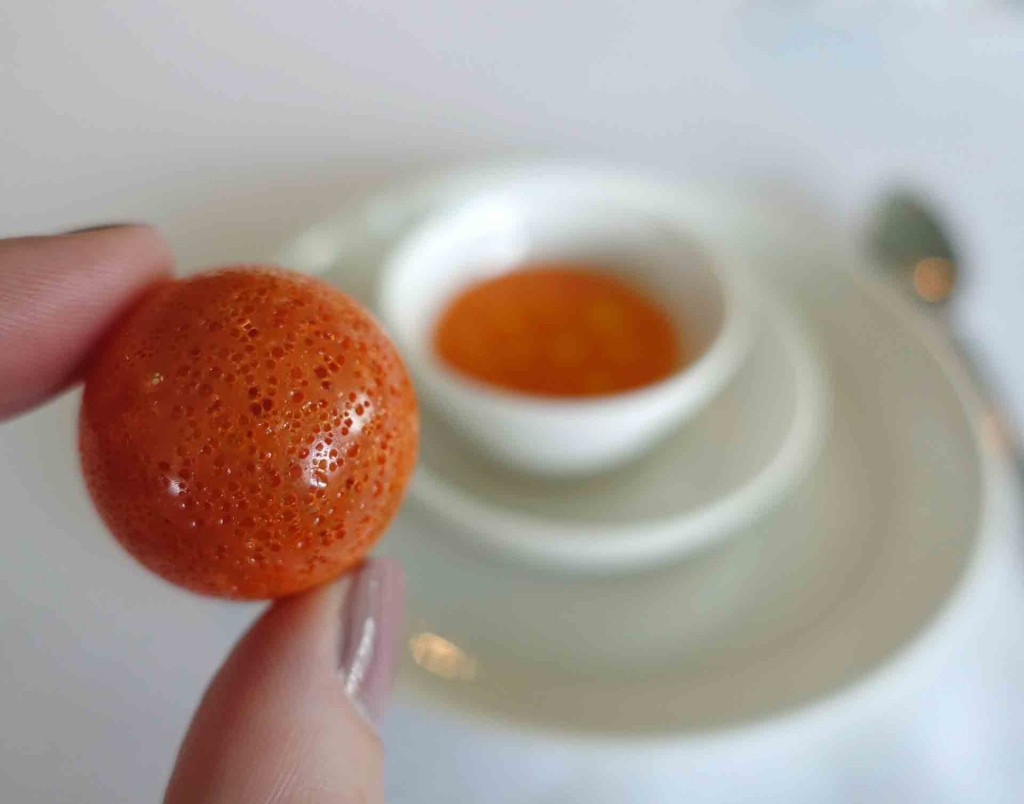 The flavours and textures married together really well – it was pretty sweet but not sickly. Another exciting dish… 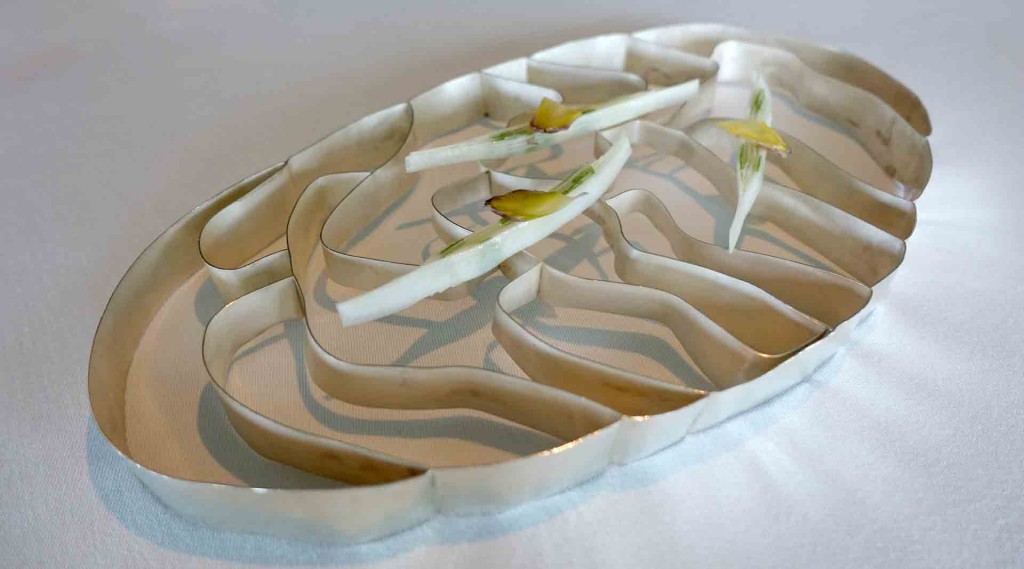 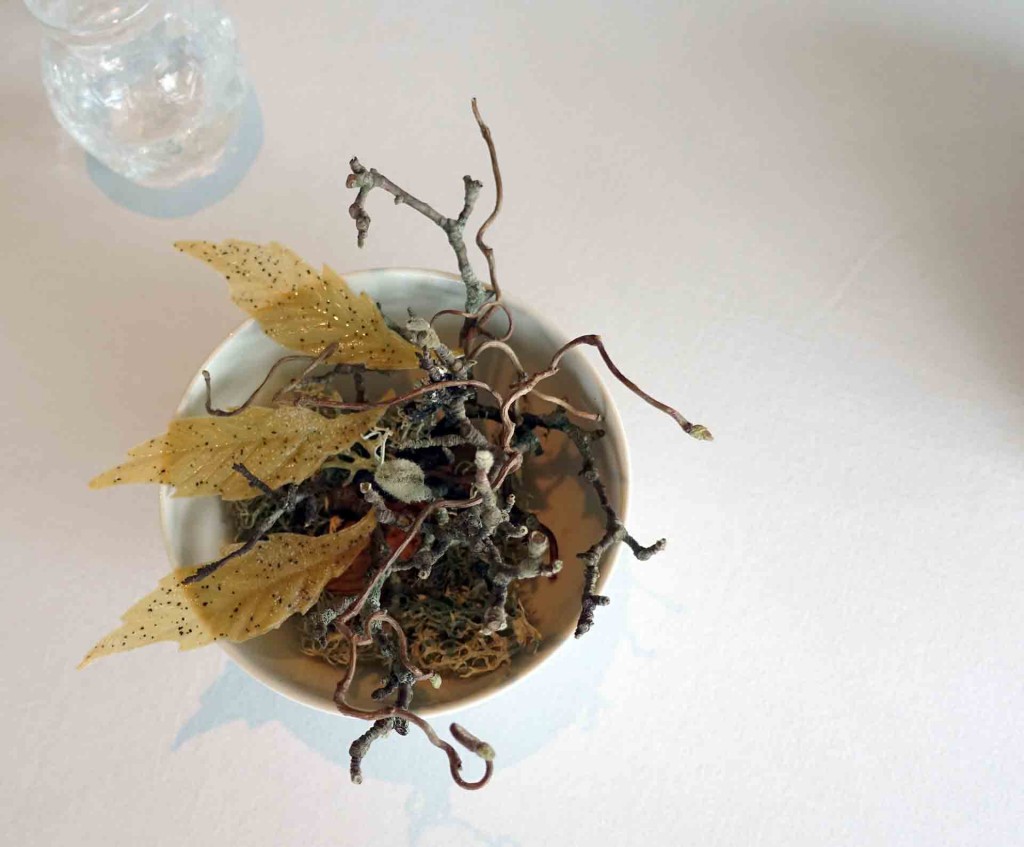 The only criticism I had of this dish was that the leaves were too fragile to enable me to scoop up enough of the delicious mayonnaise!

The snacks continued with a dried apple and herb parcel, apple juice and dried flowers. 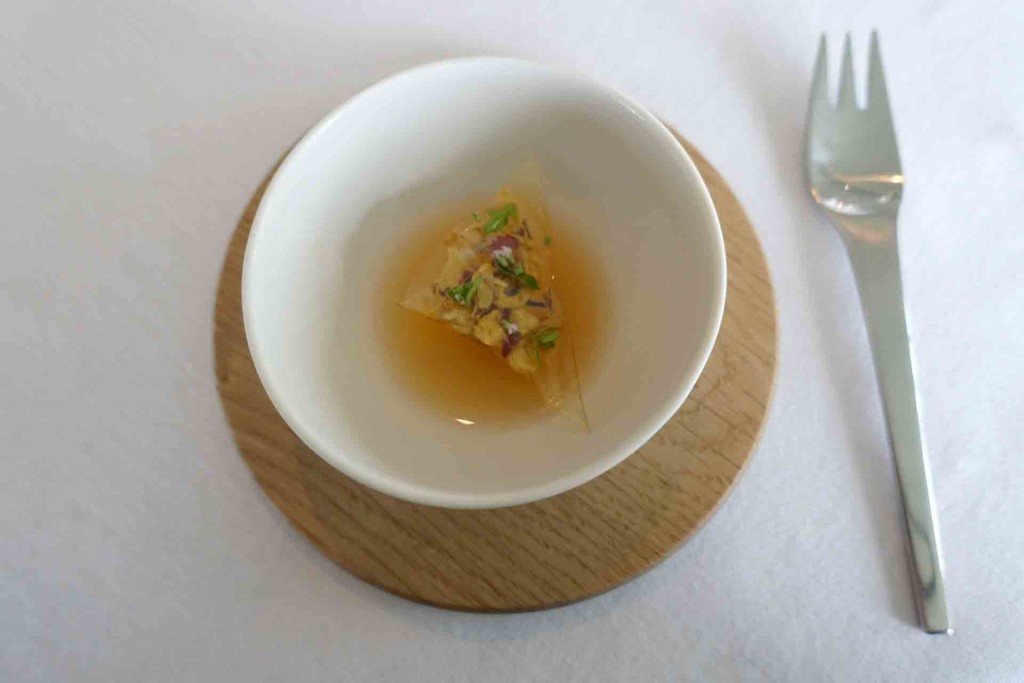 The idea of the dish is that the juice rehydrates the apple and intensifies the apple flavours as you eat. But be warned the outside of the parcel does stick to the roof of your mouth a bit so don’t eat the parcel in one and make sure your glass is full when you are eating this one. 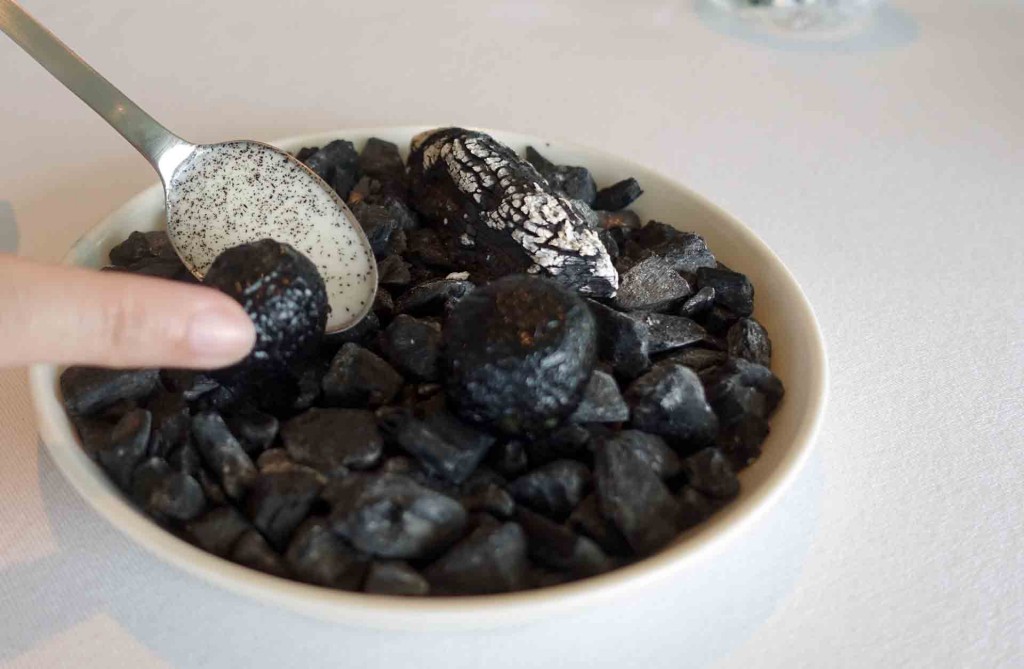 The flavours were just amazing – I’m not usually excited by potatoes at all but the smoky flavour of mixed with the light butter was just amazing.

For the next course they gave us a bit of a change of scene and took us into the kitchen. 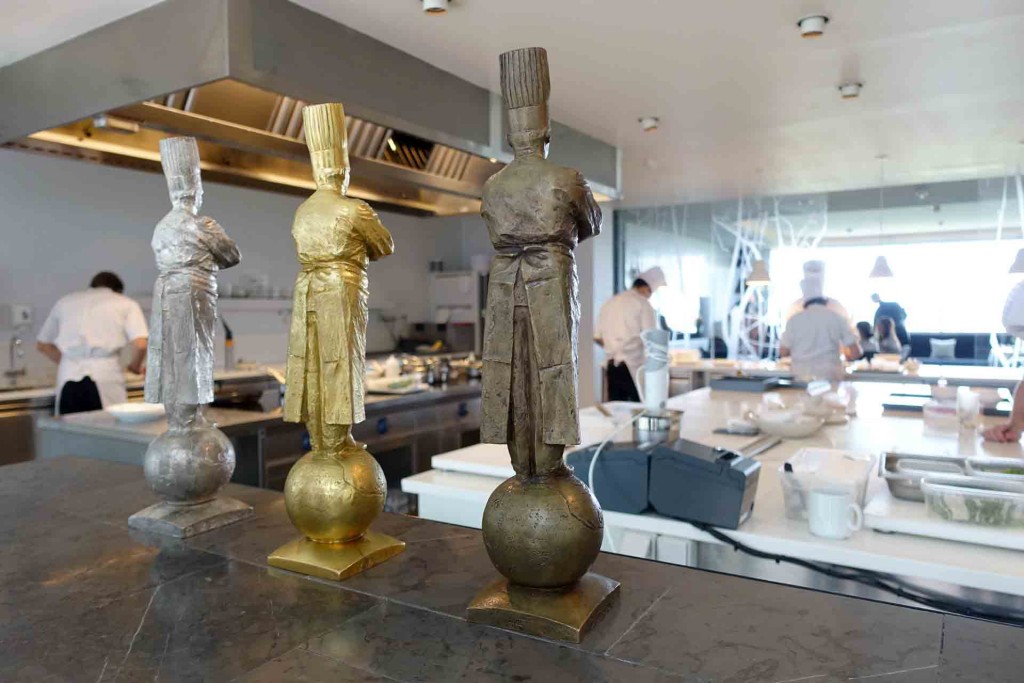 Where we watched the chefs calmly going on with their tasks and assembling all the intricate details of the dishes. While in the kitchen we at the most amazing morrel soup with pickled quail’s egg. 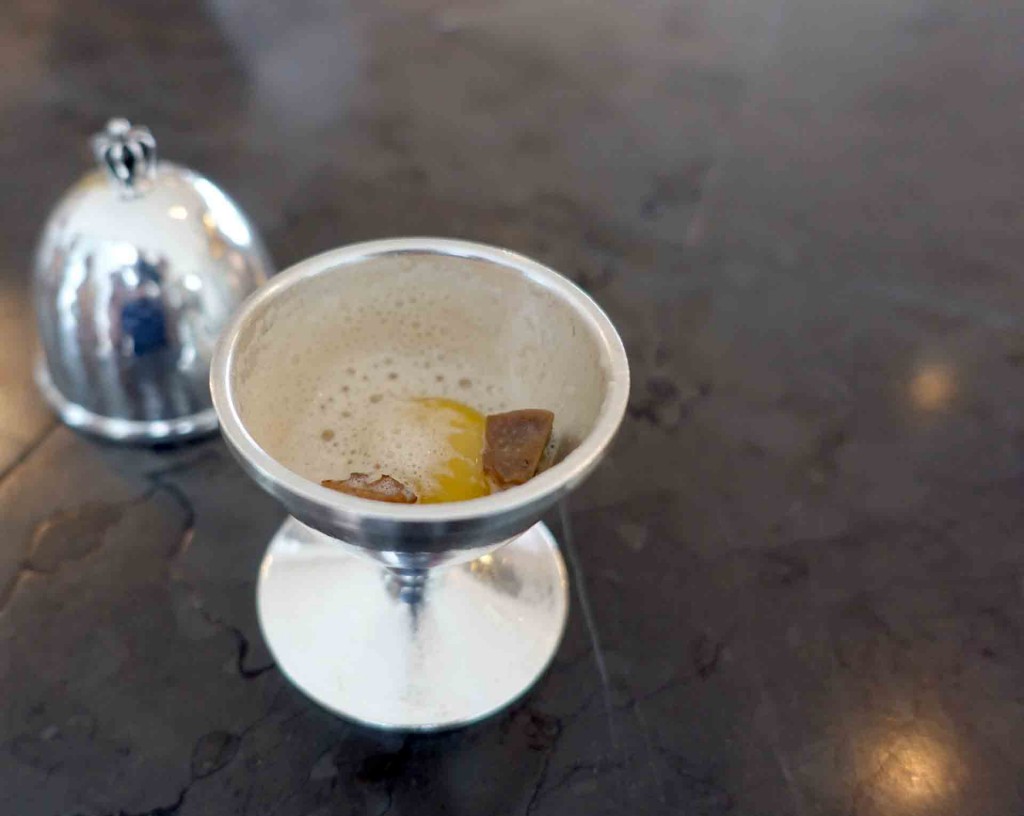 This was probably my favourite dish – the morrel taste was very intense but not too overpowering and the rich quail’s egg yolk just melted in the mouth. Given how rich it was it was probably a good thing that it was such a small portion but I definitely felt like I could have eaten another serving!

The final snack were “seaweed and razor clam” impressions of the ocean. 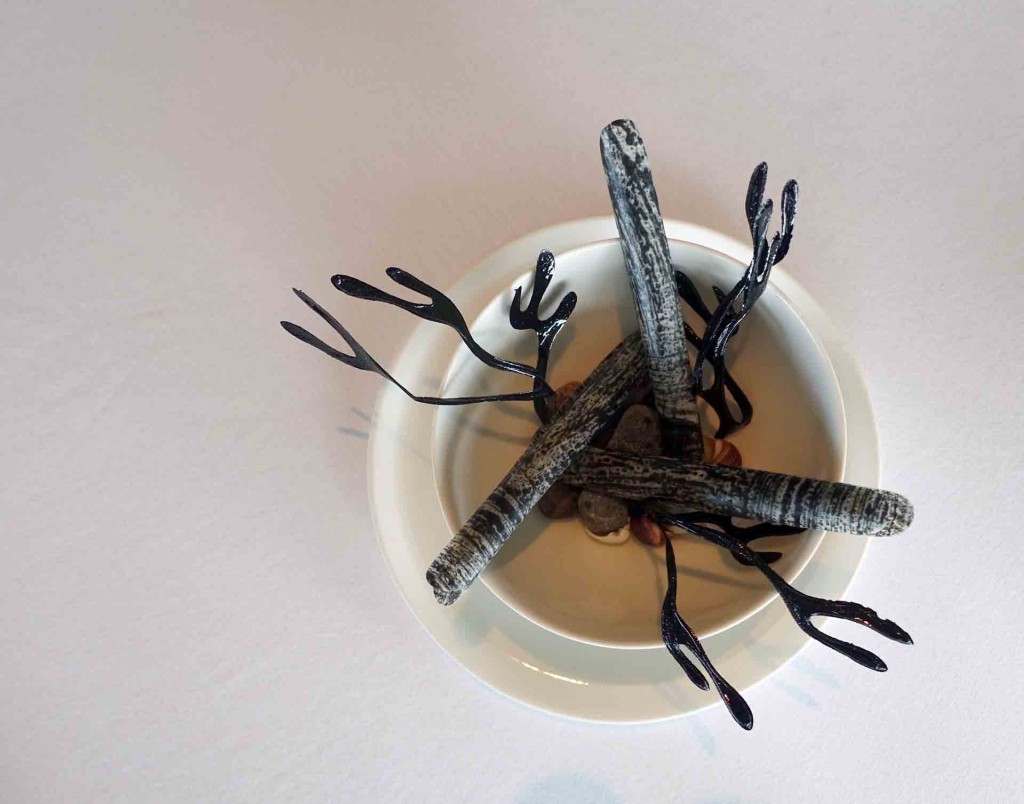 The entire dish is edible – with the clam shells made from rice paper painted with squid in and the seaweed made with seaweed powder. The shells melted in the mouth to reveal a perfectly seasoned razor clam tartare. On the side they served skir – a tart Icelandic yogurt.

Finally we moved onto the signature dishes – the signature bread was made with emmer and spelt and served with an onion flower butter. 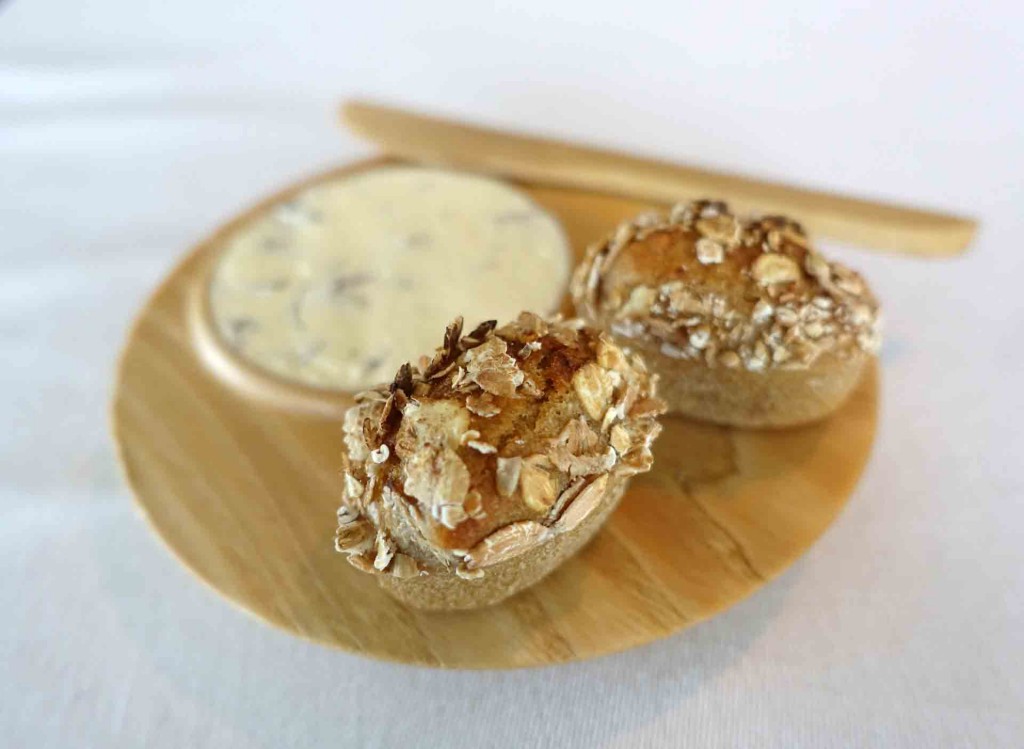 The first of the main dishes was biodynamic onions with chamomile and melted hay cheese broth. 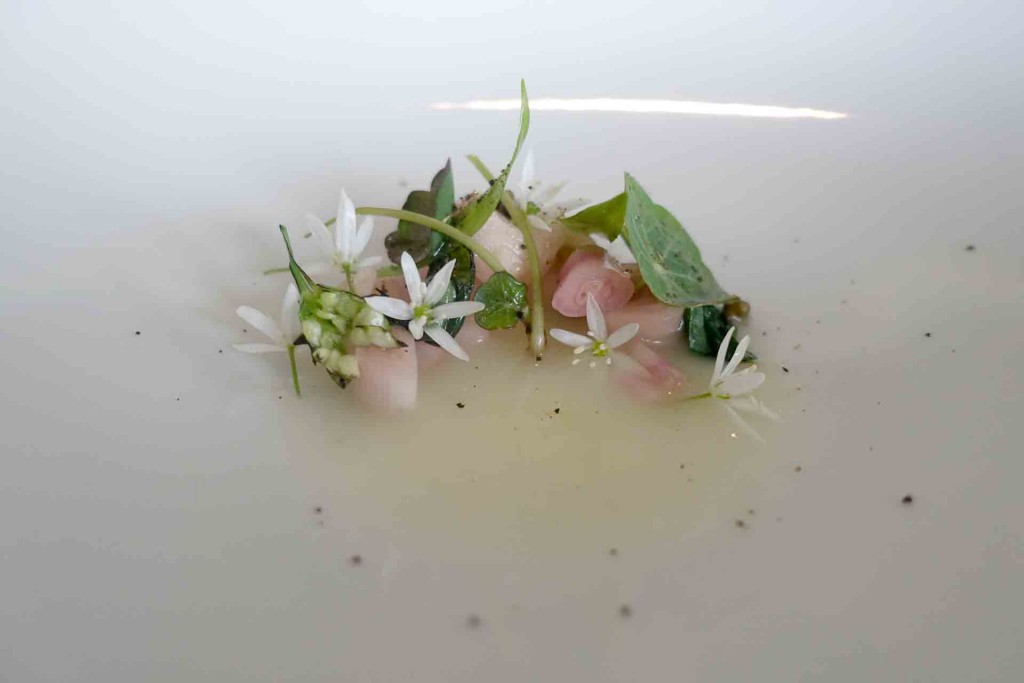 I wasn’t exactly excited by this one on paper but again Geranium subverted expectations by revealing depths of flavour in a simple ingredient that I had hitherto discovered.

Next was brill, mustard seeds and pickled green berries. 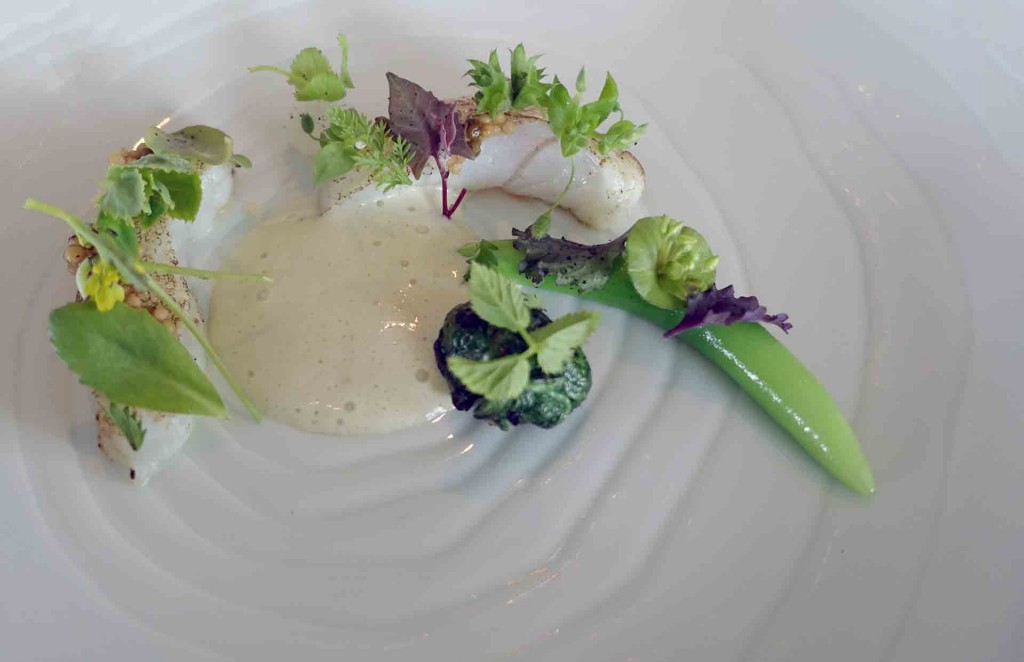 This dish had lots of flavour and the fish was really well cooked but it didn’t blow me away.

The final savoury dish was chicken in juniper aroma with pine sprouts and asparagus beer. The chicken was first presented to you in the various shrubbery which were used to add flavour to the dish – the aroma was incredible. 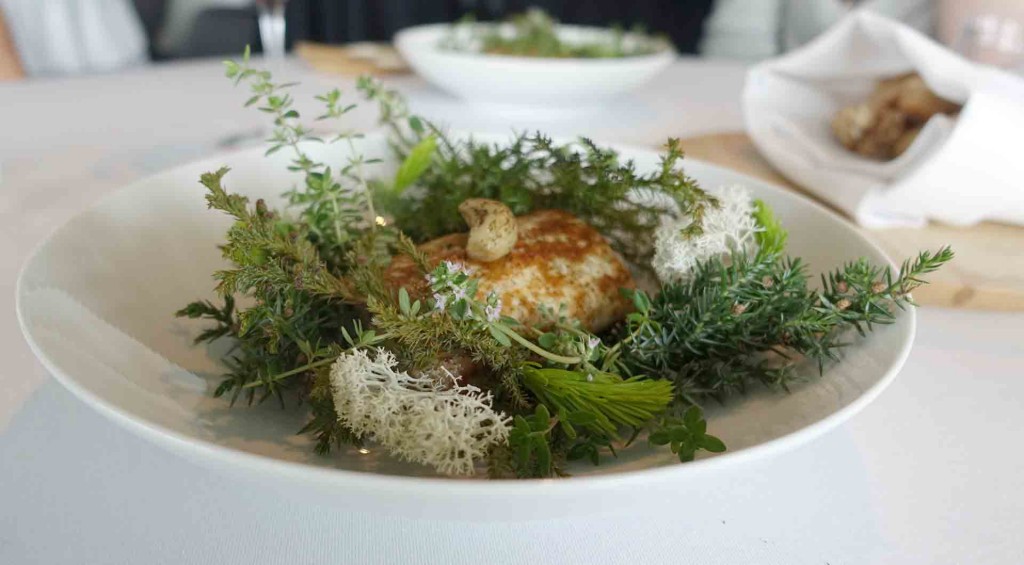 The chef then carved the ballotine and the final dish was served. 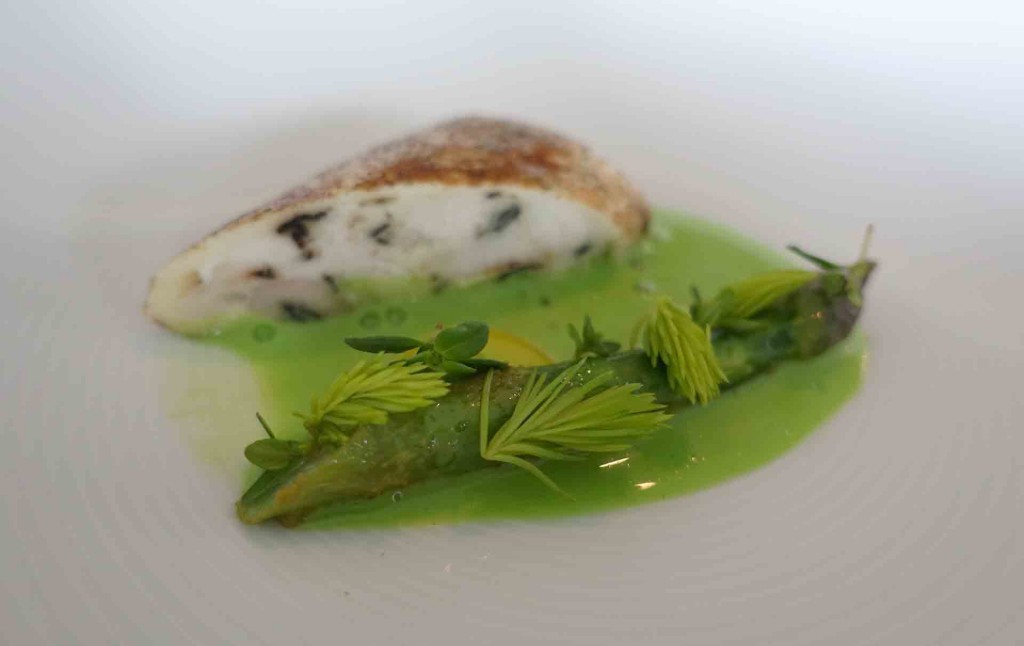 The dish had a lot of great flavours but I wasn’t really a fan of the sausage like texture of the ballotine – well cooked chicken has such amazing texture on its own I wonder why they felt the need to mess with it. 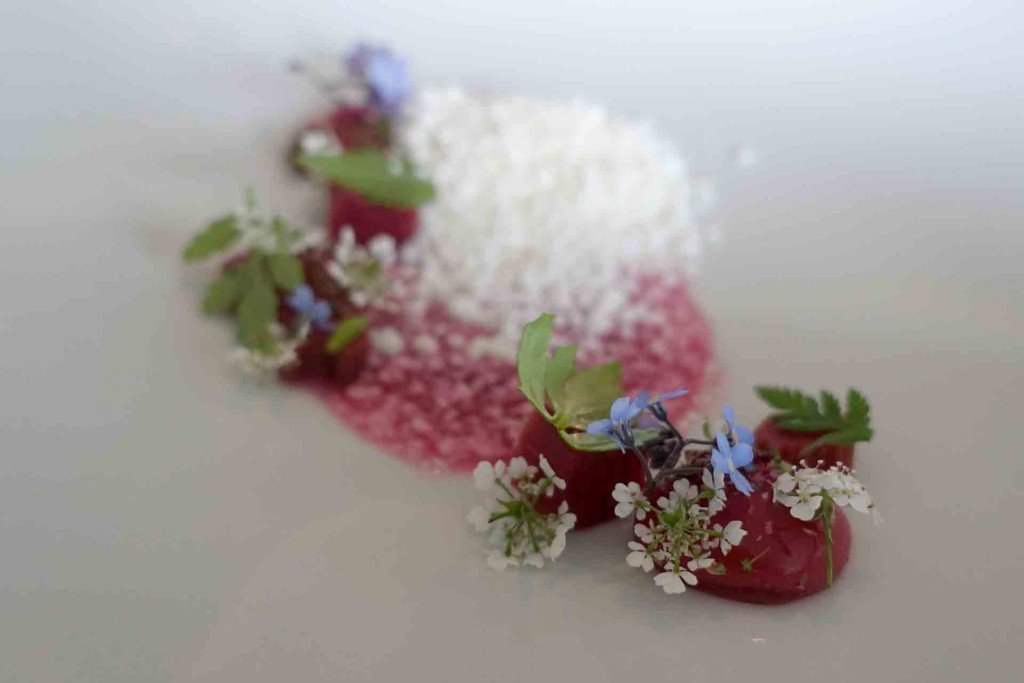 I love rhubarb and when it is in season it is just one of the best fruits – the hipe rose worked really well with it and the frozen sheep yogurt added both texture and slightly creaminess which took the edge off the slightly tart rhubarb.

The final dessert was woodruff and wood sorrel (which can be seen at the top of the page) – this was probably the most stunning dish of the meal. The tree is made from dehydrated fruit – you are instructed to crack it (which was almost heartbreaking) and then to mix it in with the sauce and frozen disc below. Each mouthful burst with flavour but overall it was perhaps a little too savoury for my tastes.

The meal ended with Coffee Collective coffee and petit fours…including the incredibly inventive Lingonberry bush with beetroot which definitely wins the award for the most inventively served petit four I have ever had. 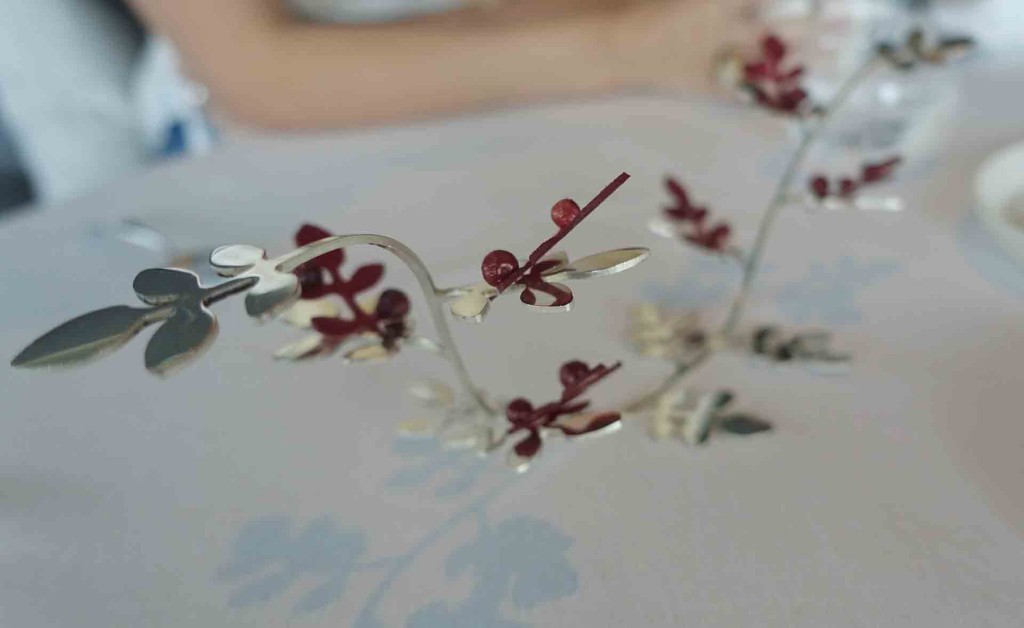 The other petit fours were an onion caramel with plum which was overwhelmingly onion-y so wasn’t exactly my favourite, a delicious cake made from pumpkin seed oil (which rivalled the butter cakes at the end of our Lyle’s meal for richness) 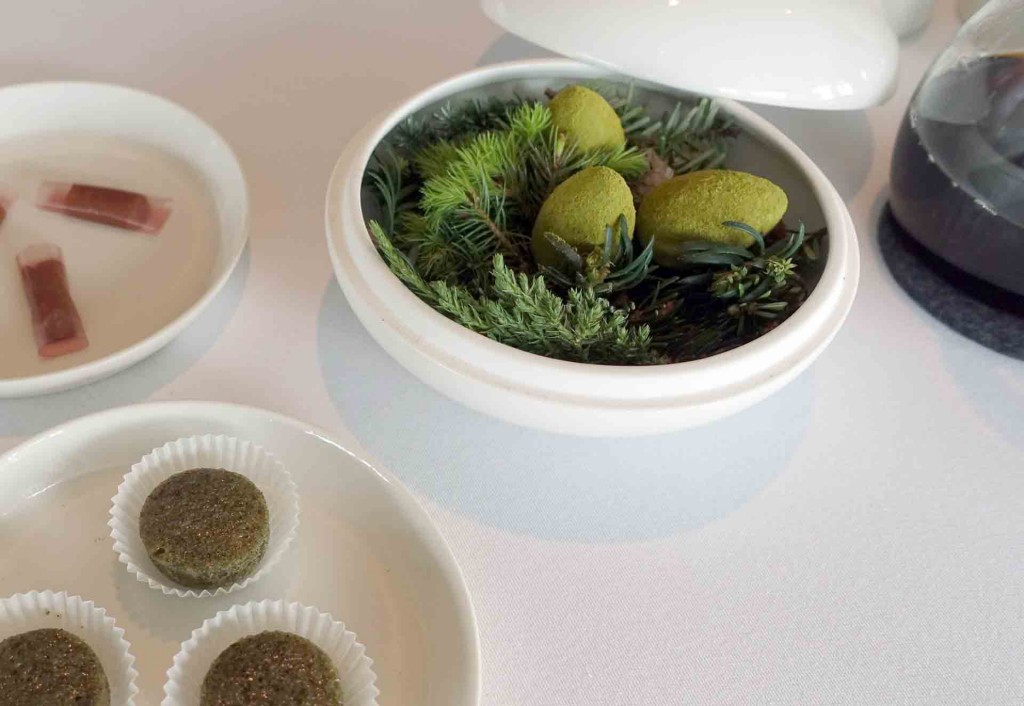 And finally the green egg with pine – which was made of dark chocolate dusted with pine and filled with toffee. In terms of flavour this was the best way to end the meal – a perfect combination of flavours and just too sweet but without being sickly.

Throughout our meal the staff were attentive and knowledgable but with a real sense of fun, the food was inventive and different but still delicious and we had some really tasty wine so for me Geranium is currently number one in terms of my Copenhagen gastronomic experiences. Geranium seems to have fallen off the World’s Top 50 Restaurant’s List this year and I really cannot see why…I would definitely disregard the list when it comes to Copenhagen’s offerings and book into Geranium as soon as you can.