Last Saturday night we had the pleasure of a meal at Kitchen Table. Hidden at the back of Bubbledogs on Charlotte Street, this 19 seat restaurant served up delicious seasonal dishes in a friendly, relaxed atmosphere.

Unusually for London (and, in my view, to the restaurant’s credit) all diners are seated at a bar around the kitchen.  Although better suited to a tete a tete this arrangement meant we had an unparalleled view of the chefs at work, and a chance to chat to them about the dishes.

As there is only one menu on offer the fear of food envy is completely taken out of the equation. And what a menu it was…Kitchen Table are fastidious about the produce that they use and plan each dish around one main ingredient.  It is clear that each main ingredient is taken from the best of those in season (which isn’t surprising given that the head chef James previously worked at Per Se and Noma.) And when each dish is announced you are told all about the provenance of the ingredient; it was such a pleasure to hear that most of the produce used is from around the UK rather than frozen and flown in from abroad.

We started with a huge oyster topped with nasturtium, lychee granita and meyer lemon jam. 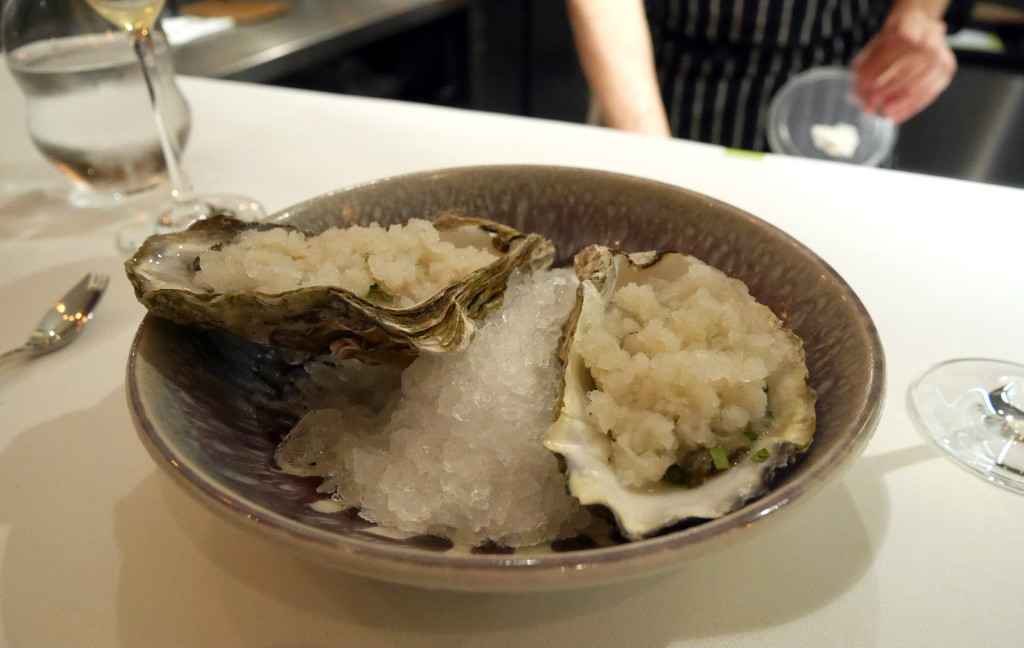 The oyster was really fresh and, given I’m not their biggest fans, it was great to have some other flavours and textures to detract from the main event.  Sadly the lemon jam didn’t quite break through the sweet lychee granita but the accompaniments meant that this was probably the first oyster I came near to enjoying!

Next I had a sour dough melba toast topped with beef tendon which had been cured with spices and chilli.  This was accompanied by fennel flowers and cilantro mayonnaise. 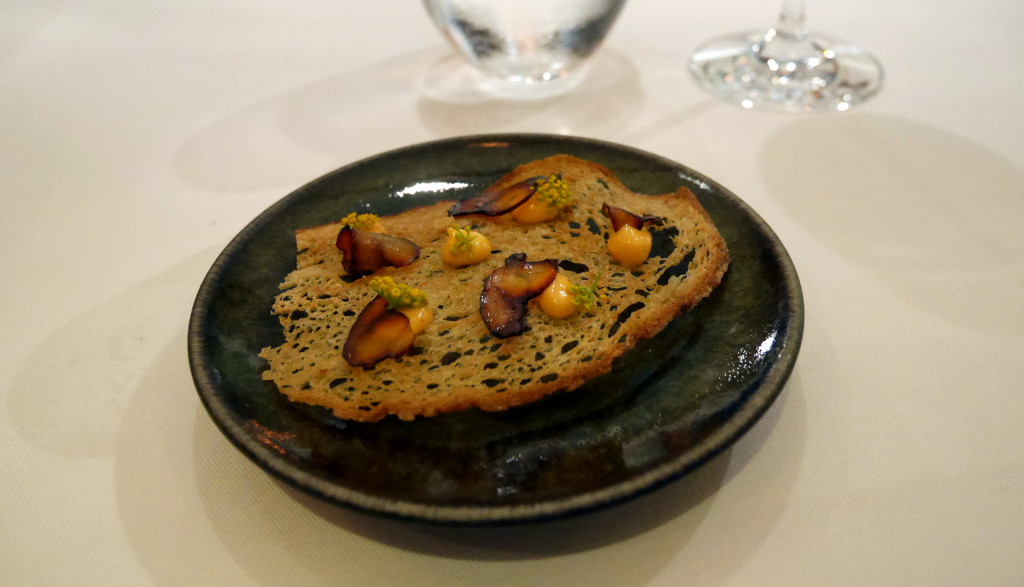 The cured beef tendon had a great flavour and there was just the right amount of mayonnaise but I was sad that this wasn’t served with a great hunk of sourdough; I never really feel that melba toast does bread any kind of justice!

The next course was a decadent dish of crispy chicken skin topped with avocado puree and roasted tomato jam. 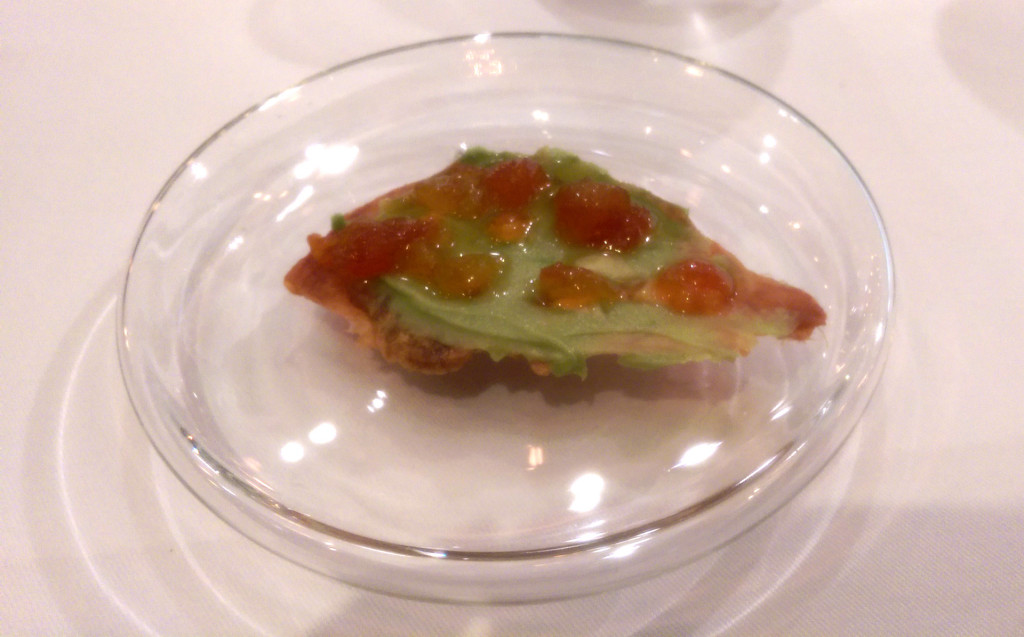 This was a deliciously naughty course but the flavour of the avocado wasn’t quite strong enough to stand up against the chicken skin; that said, that was probably my fault for being a fussy madam about cheese and the chef’s having to come up with an alternative!

The tomato course consisted of dehydrated heirloom tomatoes served with melon, chiso leaf and topped with a tomato water. 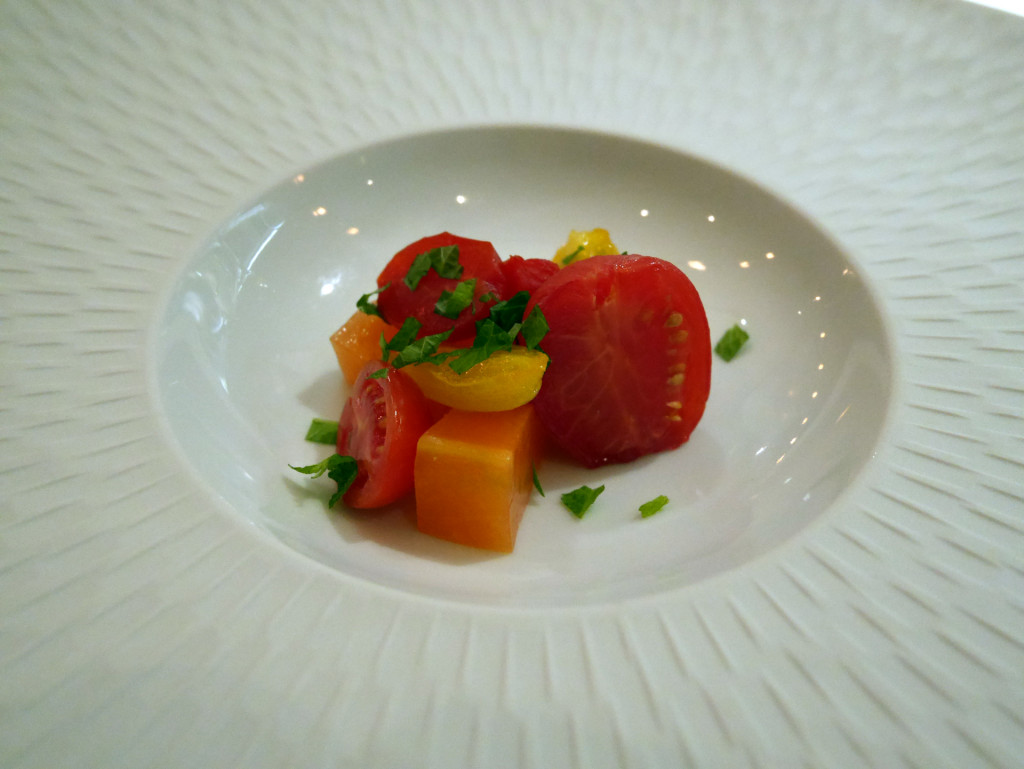 Given the natural richness of heirloom tomatoes, the boy and I were a bit disappointed by the lack of flavour in this dish.

Luckily the next dish more than made up for the one before –  a raw Orkney scallop served with ginger mayonnaise and grated cured, smoked scallop roe. 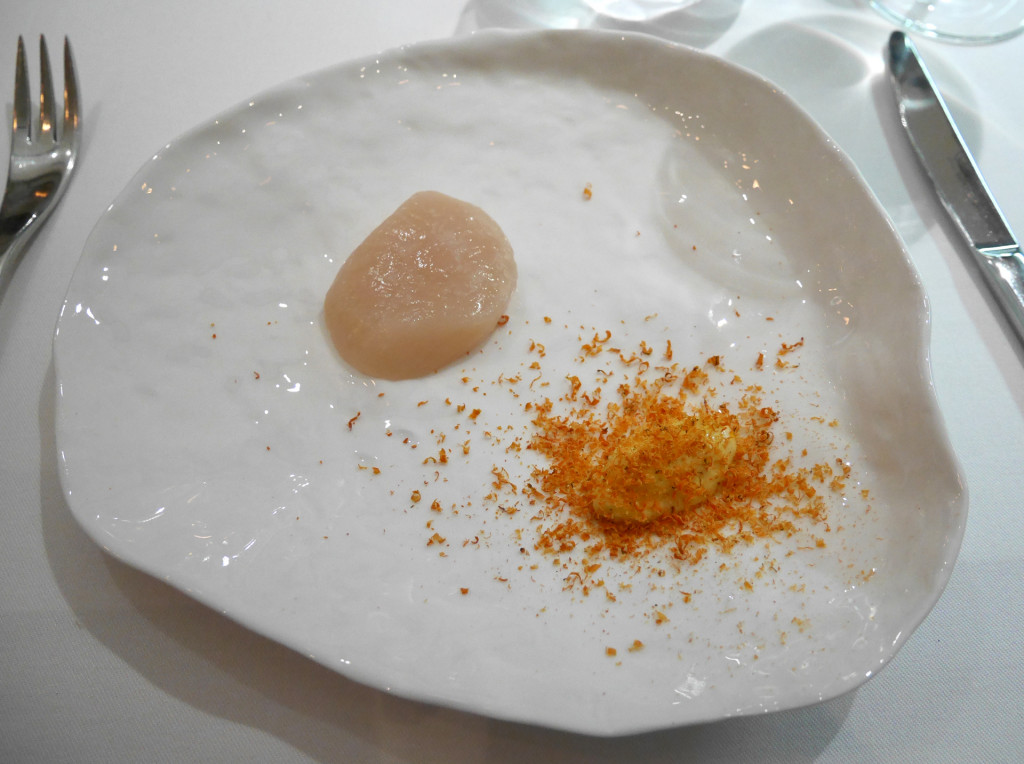 The scallop was so fresh and flavoursome that it almost needed no sides but the addition of the smoked scallop roe added a brilliant extra component to the dish.

The last of the fish dishes was a Cornish sardine served with a yogurt puree, almonds, coriander and textures of cauliflower. 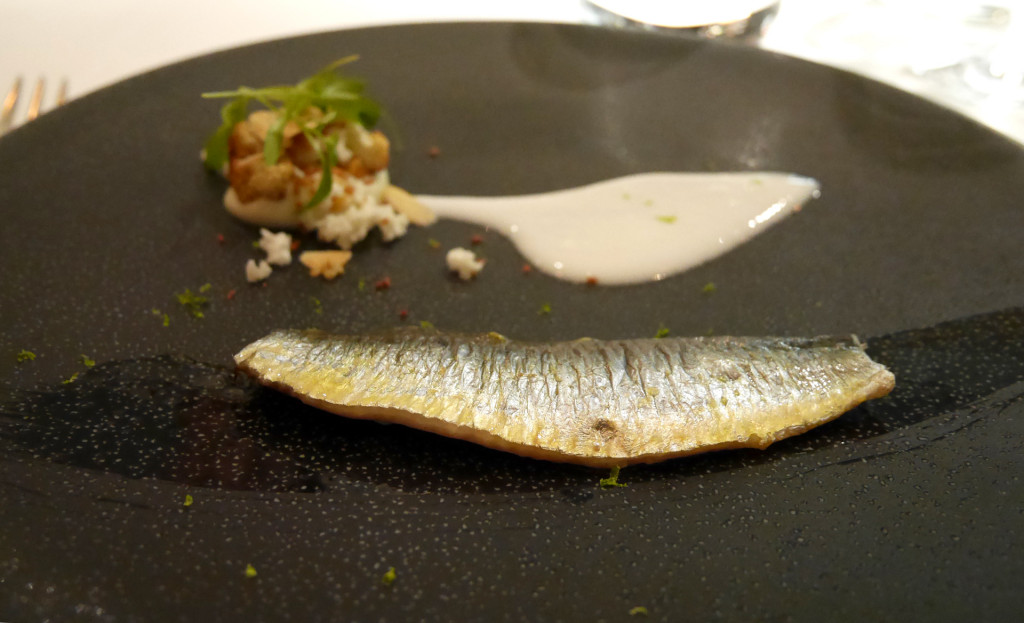 The sardine was probably the best I have ever tasted – rich and meaty but not too fishy and the almonds and cauliflower went with it really well.  The boy and I both felt that the yogurt didn’t really add anything though.

Probably the stand out dish of the evening was the fresh pasta. 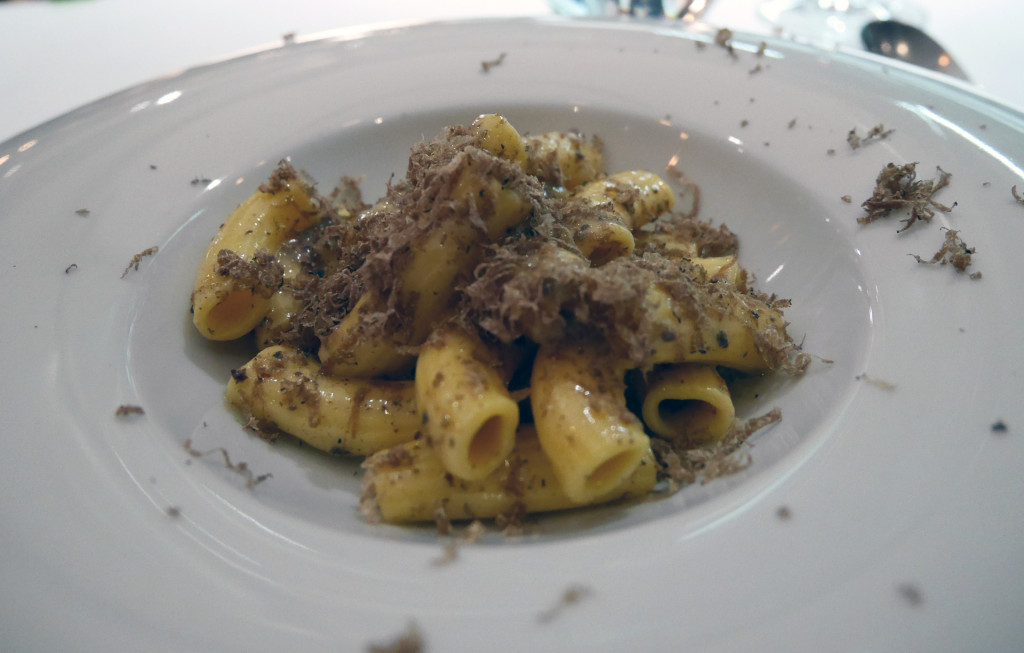 This homemade pasta was so wonderfully eggy it was almost decadent in itself. Then the chefs added a truffle butter champagne sauce and topped it off with grated truffle.  Wow. Despite its richness this dish wasn’t too much and I could definitely have eaten a second helping.   The pasta was served with Domaine des Schistes; made from 95% grenache and 5% syrah this worked perfectly with the pasta dish as it was light but also cut through the richness of the sauce.

The main event was Dexter sirloin steak with mint oil, sauce béarnaise and english peas.  The steak was perfectly cooked and full of flavour. 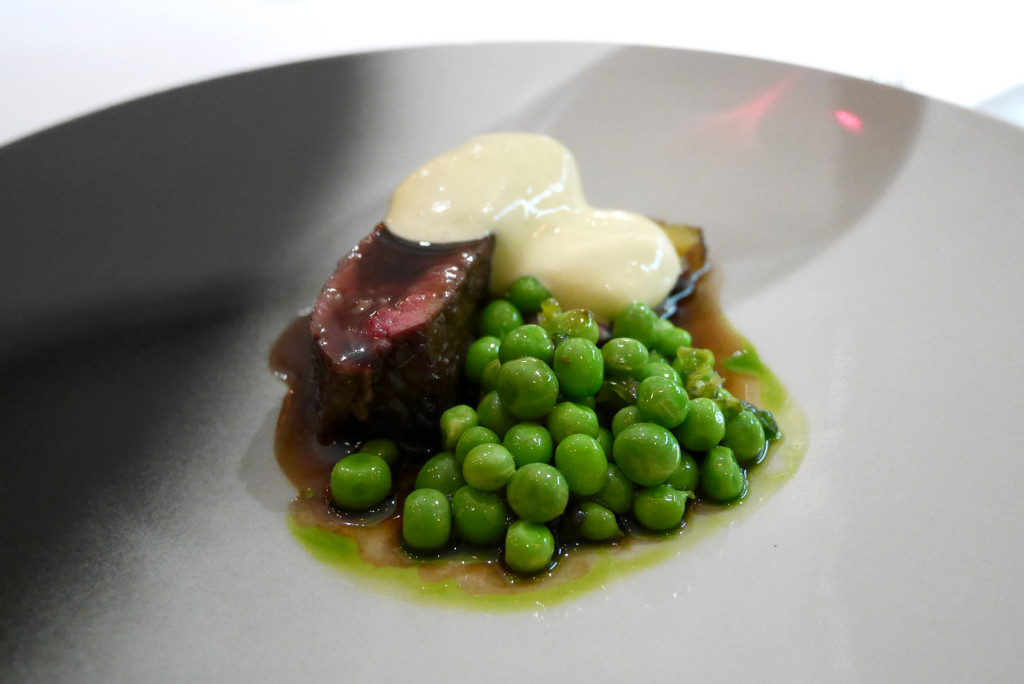 Although I could see the merit in the contrast of textures, the peas were a little too al dente for my liking.

Instead of a cheese course I had white peach with green bobby beans and pistachio. 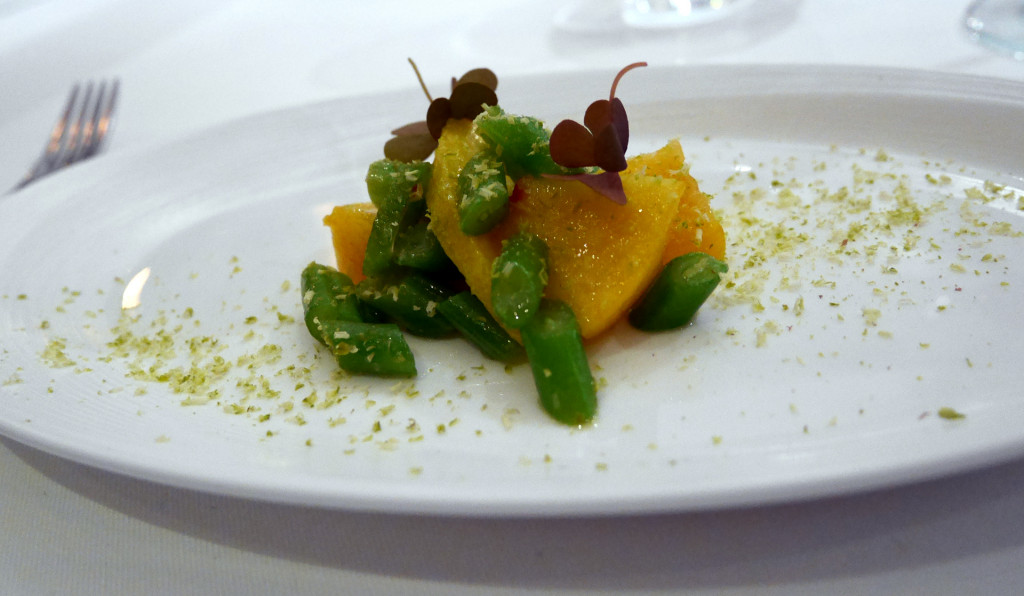 This unusual combination worked really well, with the green beans balancing out the intense sweetness of the peach.

For the first of the desserts the chefs served up strawberries and cream.  It was great to see a kitchen that had enough confidence just to serve a dish which lets seasonal flavours speak for themselves rather than add a foam or attempt pizzazz that really only serves to bring a classic down.

The stand out pudding for me was the yogurt parfait served with fresh green almonds, pine tips and gooseberry.  This was just phenomenal. 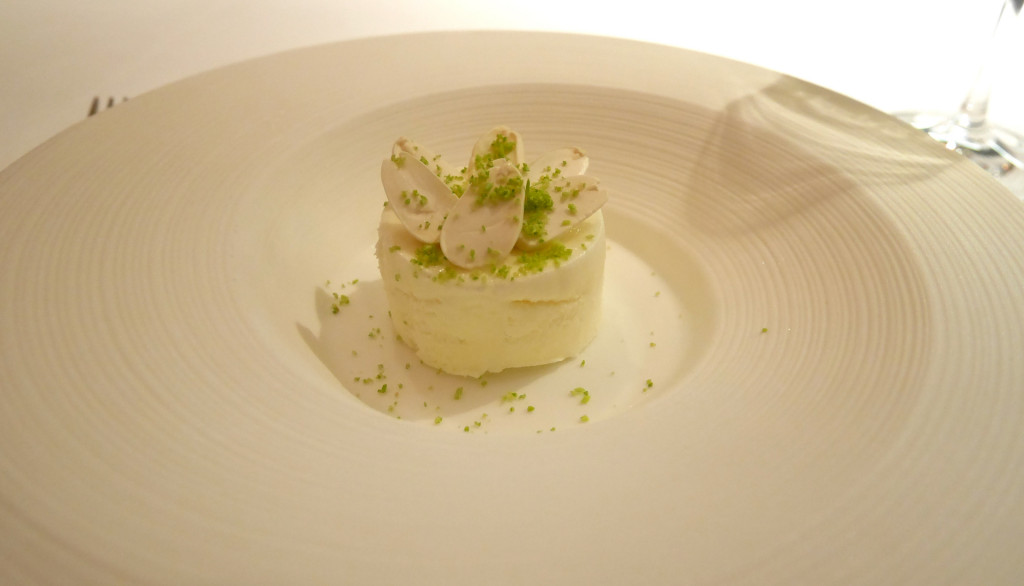 The balance of the tart gooseberry and the lightly flavoured yogurt and the contrast in textures between the crunchy almond and the smooth parfait was perfect. And the pine added a completely new flavour for me; one that I would happily taste again.

As our dinner came to a close we were served Madagascan salted vanilla fudge with a chocolate salted caramel biscuit, both of which were absolutely delicious. 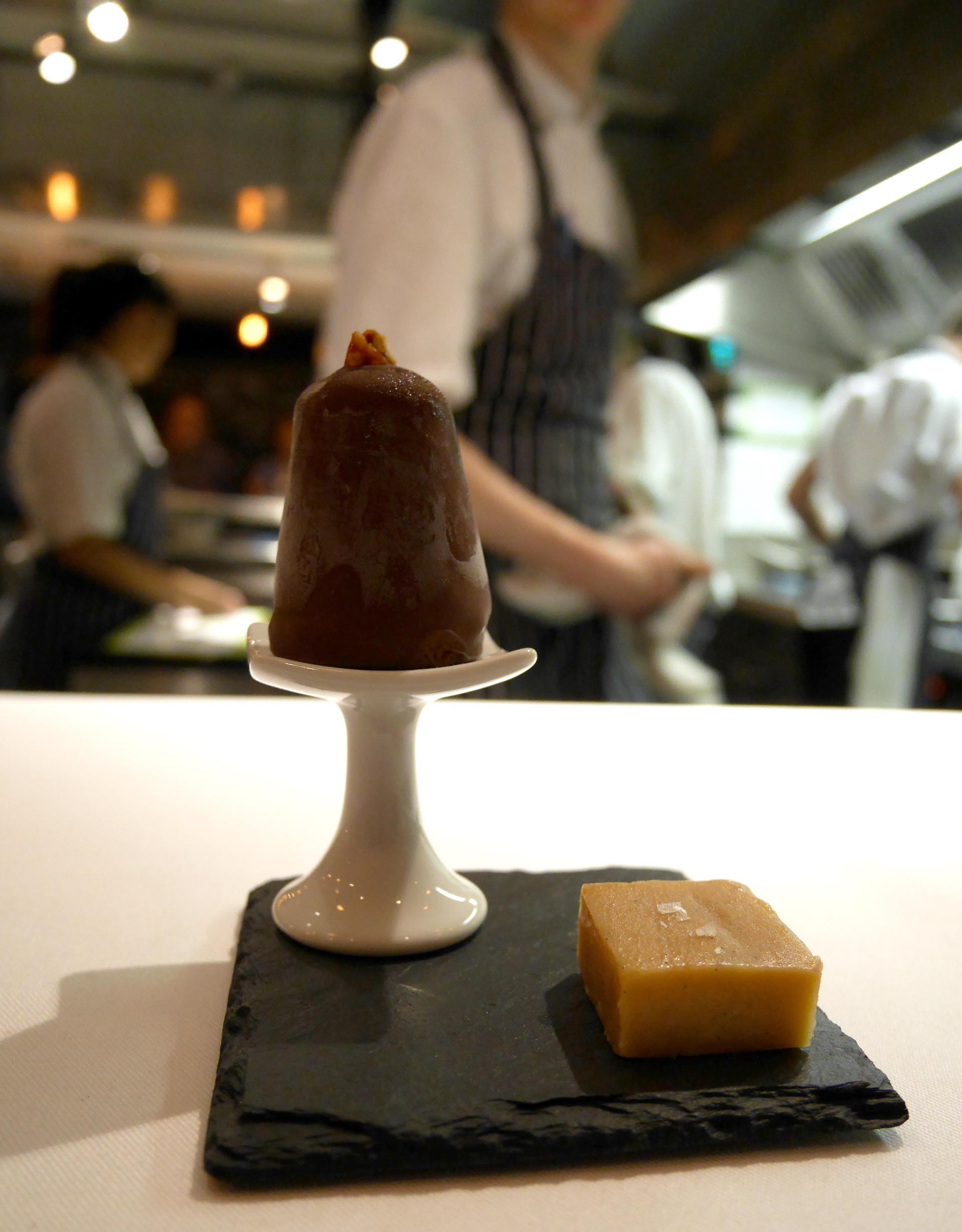 And for the final dish marshmallow flavoured with sloe. 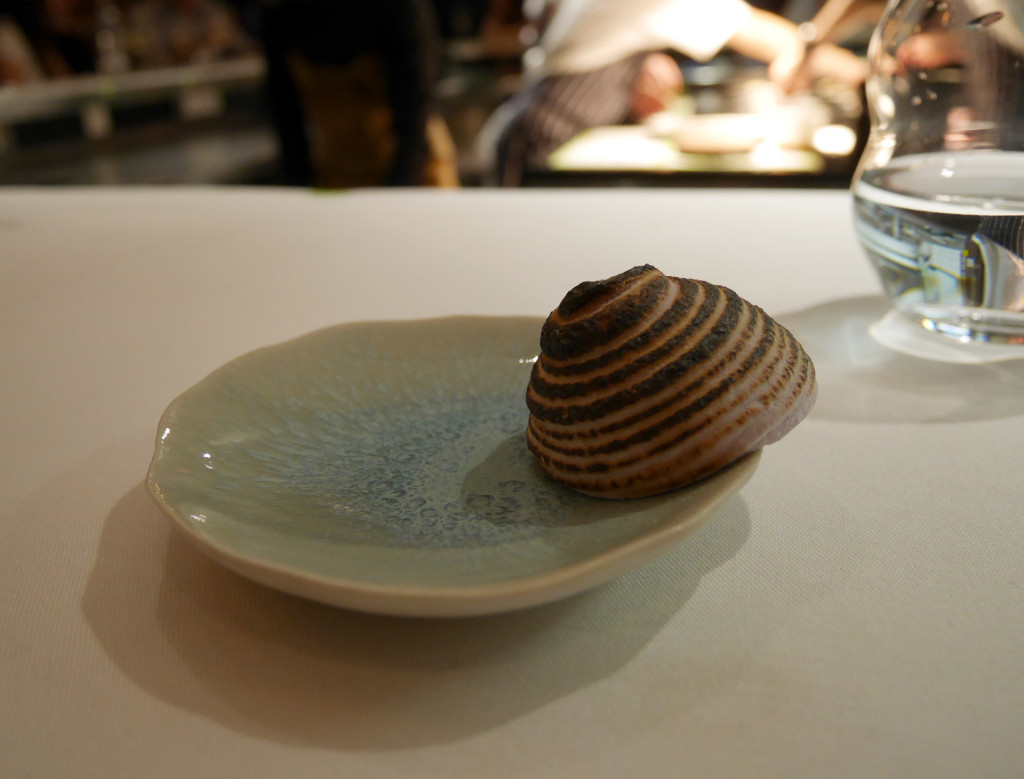 Freshly blow-torched so there was a smokiness resembling camp-fire days of old this was a really fun way to end the meal.

Somehow, despite all the different dishes, I wasn’t uncomfortably full just satisfied; a sign of a really well-planned tasting menu as far as I’m concerned. Given the format (which is pretty unique for London), great atmosphere and seasonal element to the menu, I would love to return another time and try more of what Kitchen Table has to offer