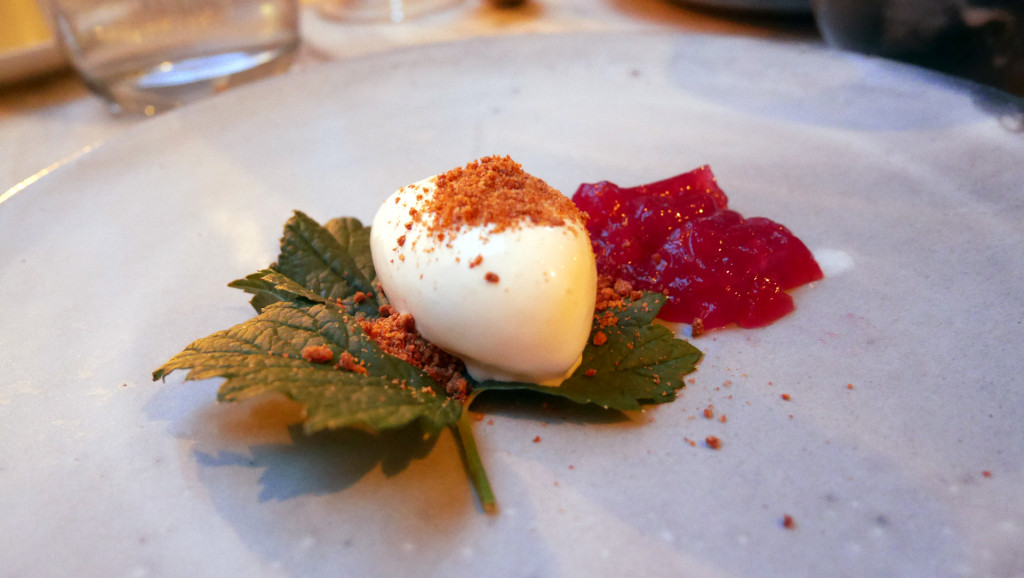 Seeing as I’m yet to be let down by any of the restaurants/pop-ups run by the Young Turks, The Clove Club has been on my list since it opened in Spring 2013.  The focus of the tasting menu is on seasonal, British ingredients and innovative flavour combinations. Their approach resulted, overall, in a really delicious meal and I would definitely return.

The Clove Club has been set up in the Shoreditch Town Hall, a brilliant light airy venue in a really central location.  The staff were some of the most friendly I’ve come across in a London restaurant and to top it all off were really knowledgeable about the food and drink they had on offer.  The sommelier in particular gave us some great pairings with our food. 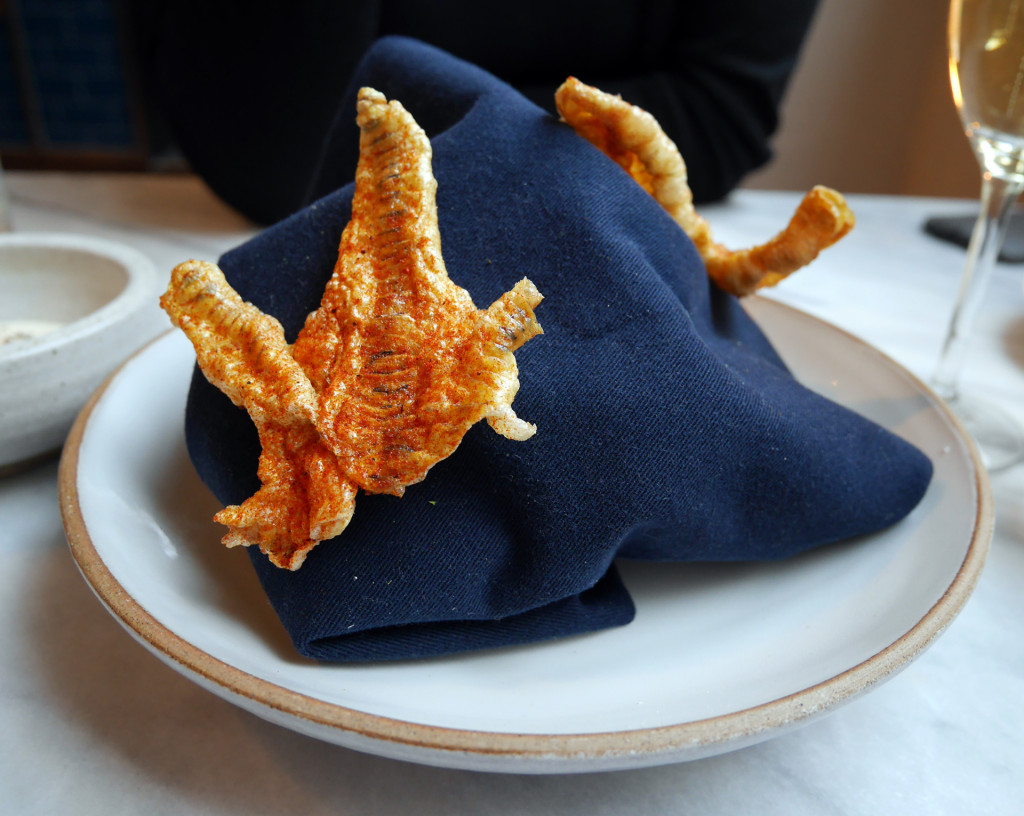 I’m not going to lie, I judged this book by its cover and wasn’t exactly convinced when I tentatively took my first bite.  As ever when judging by appearances, I was proved wrong…the deep fried chicken feet were delicious! Essentially these are just a whole hunk of crispy, salty chicken skin.  And the rich feet were balanced out perfectly by the light fresh tarragon sauce.  This dish left me excited and open-minded about what was to come!

The next snack was oak smoked cods roe on rye. 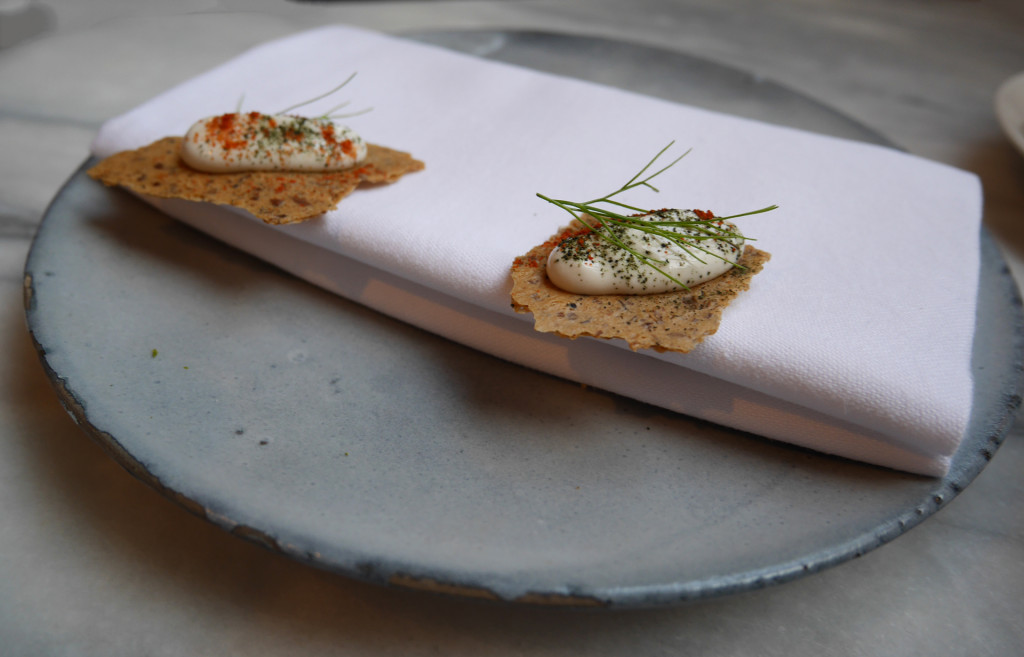 This was basically posh taramasalata.  But, being a big fan of this dip (which has sadly gone out of fashion since the advent of hummus) I was very happy that it was back on the menu.

The melon with schezuan pepper was beautiful… 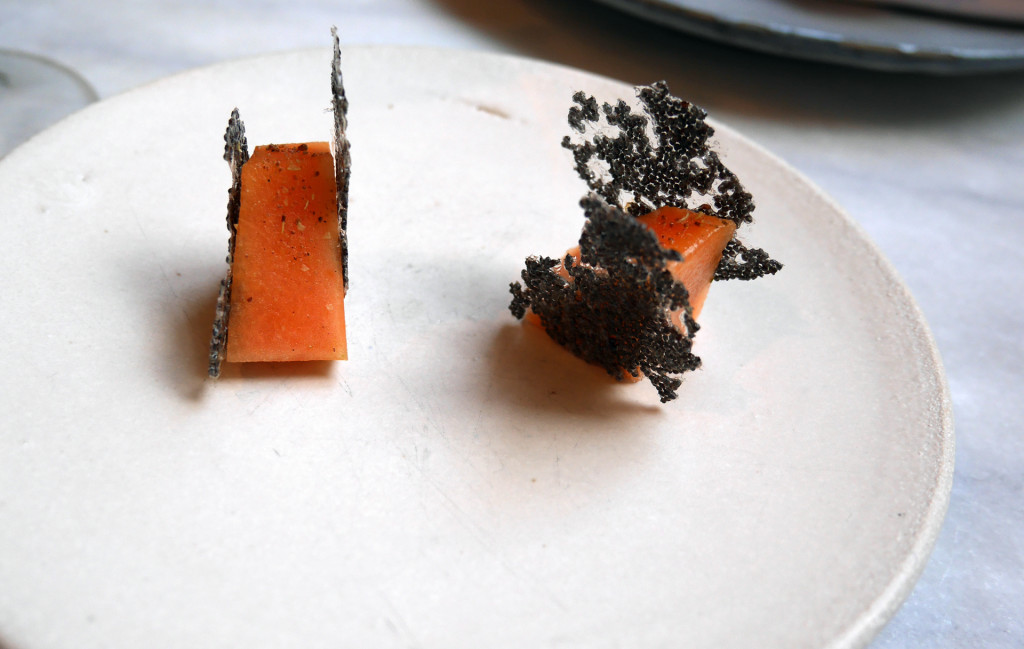 It would be an understatement to say that melon’s not really my thing but, by accompanying it with the spicy pepper flavour, this was at least palatable (a real achievement!)

The miniature tart of cows curd and beetroot was light, fresh and cleansed the palette perfectly for the next dish… 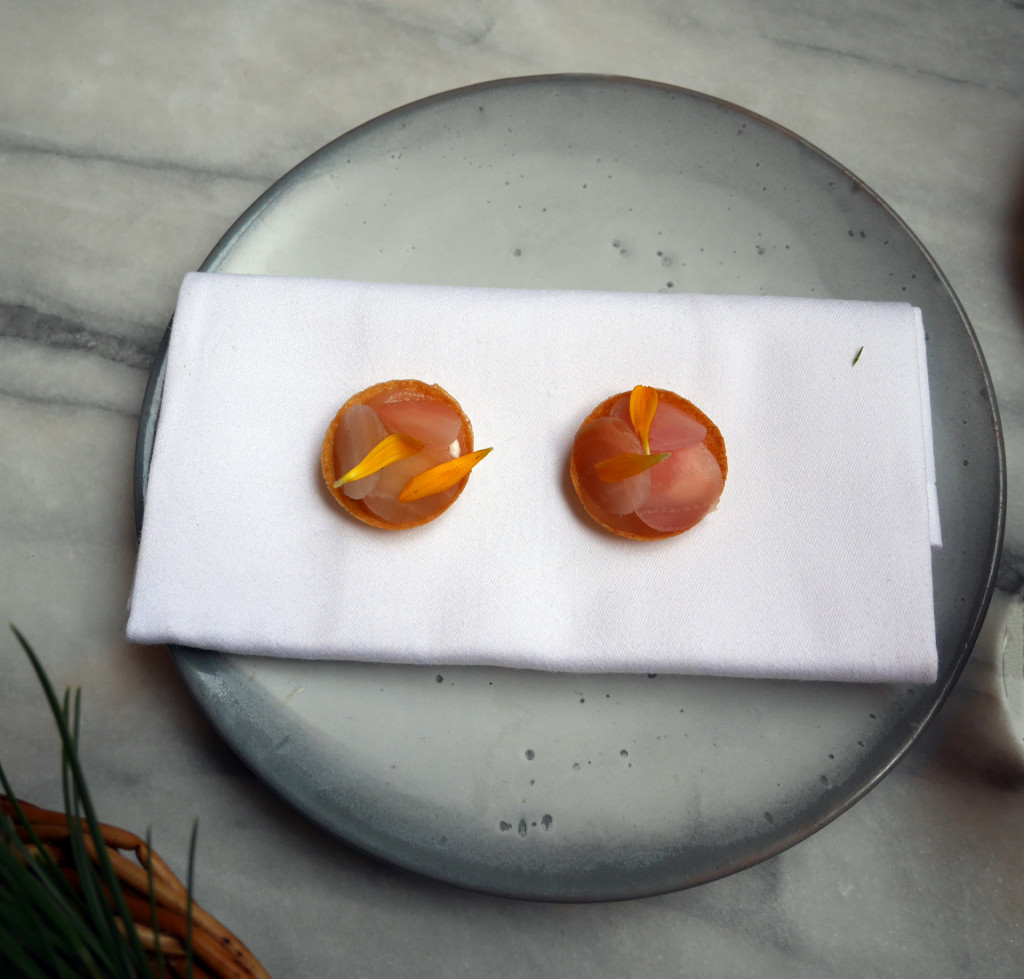 Isaac MacHale’s famous buttermilk fried chicken with pine salt.  Having had this a number of times during the Young Turks’ residency at Upstairs at the Ten Bells, I was perhaps a little too overexcited when the waitress put this basket of goodness down. 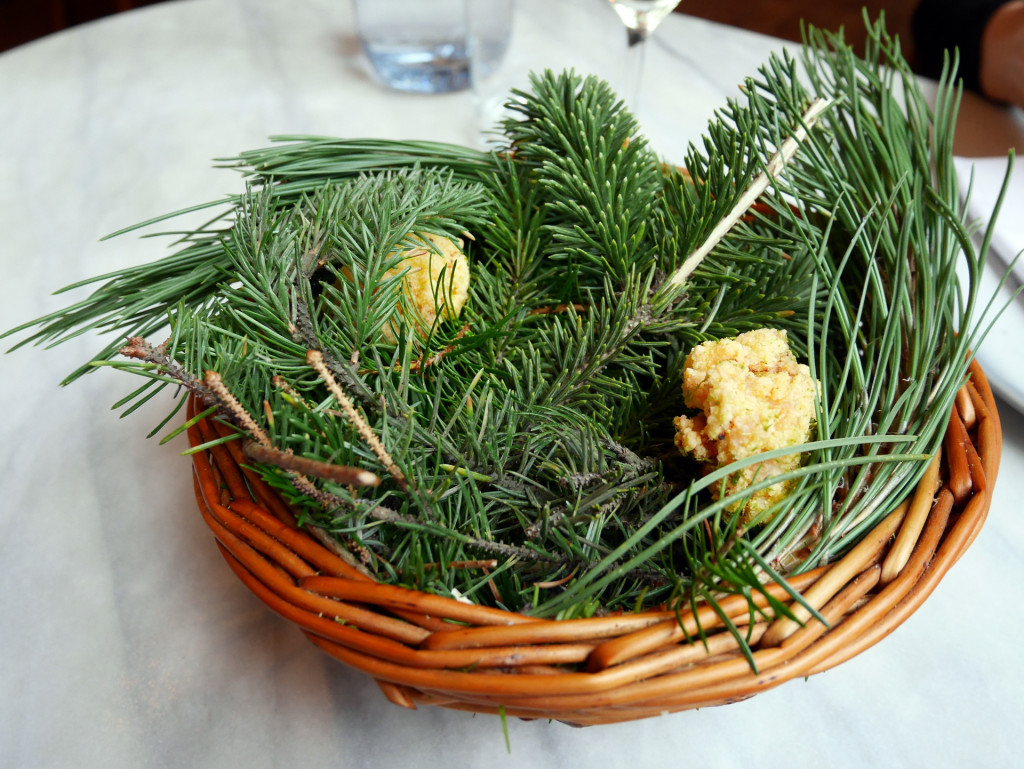 Juicy, salty and yet to disappoint.  And now that Isaac MacHale is no longer working with Upstairs at the Ten Bells this is one big reason to make a trip to the Clove Club!

Next up was albacore tuna with mustard, daikon and chrysanthemum. 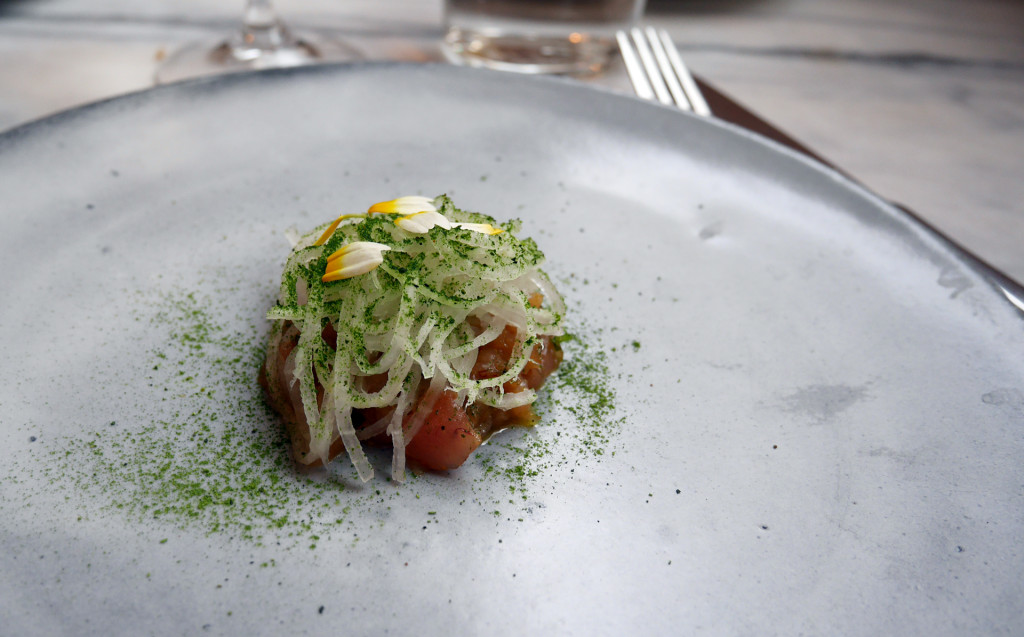 While beautifully presented, this was probably the only savoury dish in the meal which was disappointing. The tuna was just a bit flavourless (and definitely couldn’t stand up against the mustard).

The ingredients were back on form, however, for the next dish of tomato, sheep’s curd, watercress.  This dish was so beautiful… 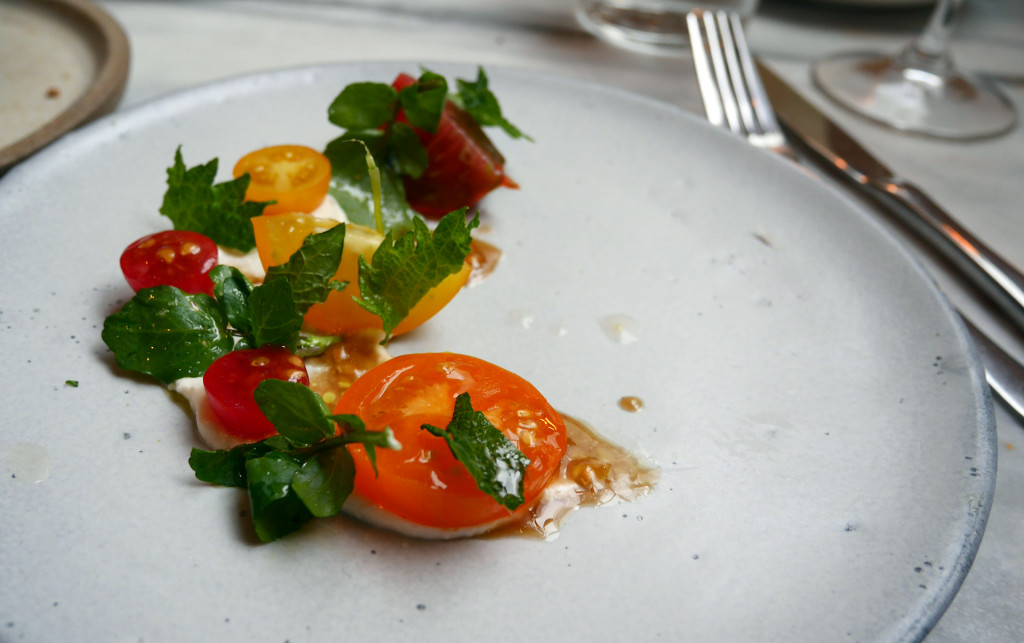 And to top off its appearance, the rich, juicy, intensely flavoured tomatoes were an absolute delight.  I could have happily chowed down on a much bigger portion!

The tomato taste sensation was followed up by another gem – flame grilled mackerel with gherkin and cucumber, elderflower meringue and fennel. 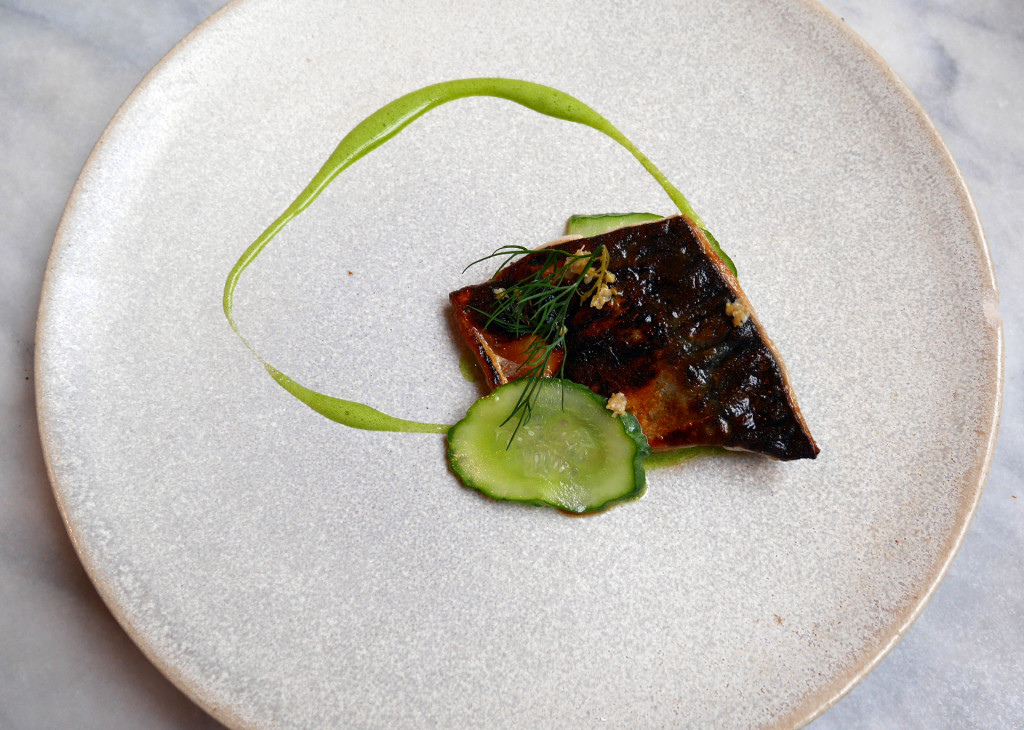 The fish was perfectly cooked, with just the right amount of char adding to its already rich flavour. And the sides, although delicate in flavour, went really well.  The boy and I spent some time debating whether we thought this version rivalled the Ledbury classic (more in this post) which says a lot about how tasty this dish was!

Next up was the Cornish thornback ray with cauliflower, samphire and butter. 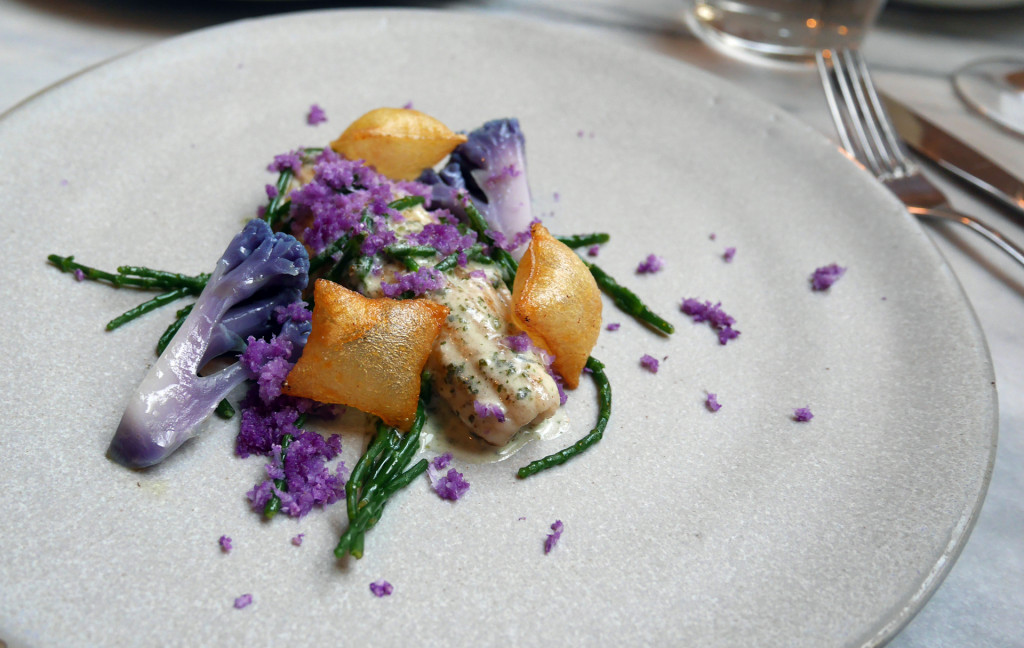 The colours blew me away; the fish wasn’t half-bad either (i.e. delicious!)

Cep mushroom tart with cep base followed – this was richy, earthy and satisfying. 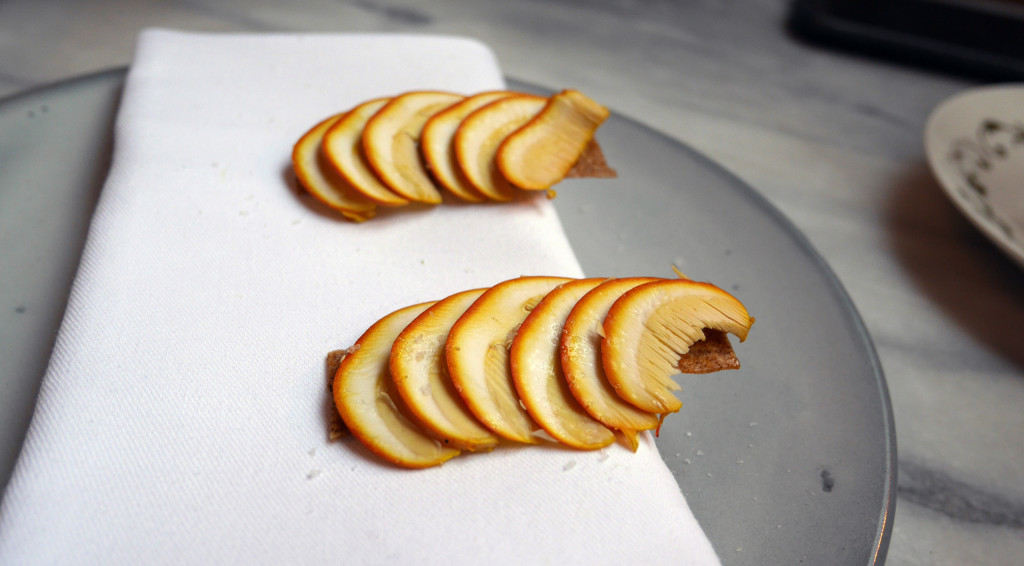 Having never heard of this breed of cattle before last week’s meal at the Kitchen Table (for more see here) we were presented with a cut of Dexter beef for the second time in ten days! This time, fillet with a risotto of seasoned grains, spinach and girolles. 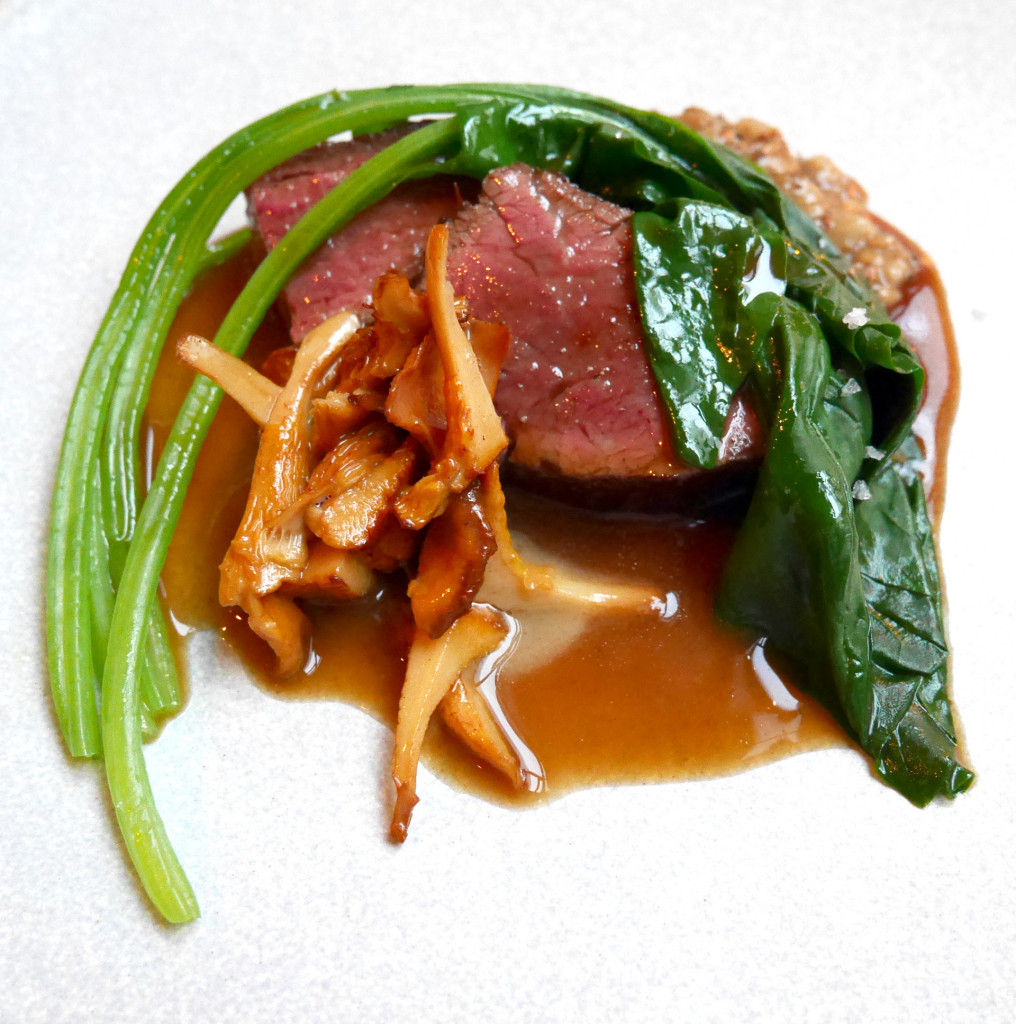 The fillet melted in my mouth, and the texture of the risotto combined with the earthy girolles meant the dish had a rusticity which I absolutely loved.

After such a strong set of savoury dishes I had quite high expectations for dessert but the first dish of black pepper ice cream with fizzy lemon mousse sadly didn’t really live up to the rest of the meal. 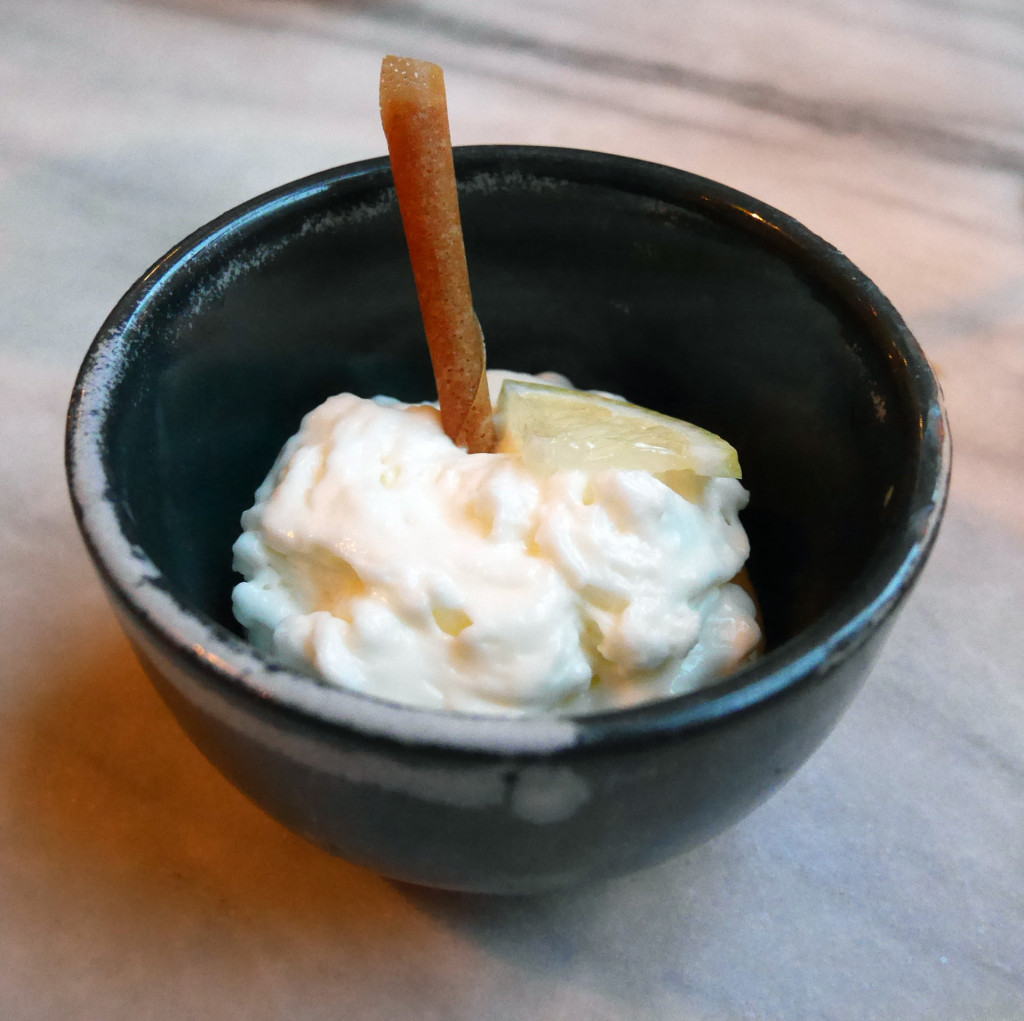 The lemon mousse was really zesty and I enjoyed the fizziness, but I couldn’t really taste the ice cream and so felt the dish didn’t quite live up to its potential. 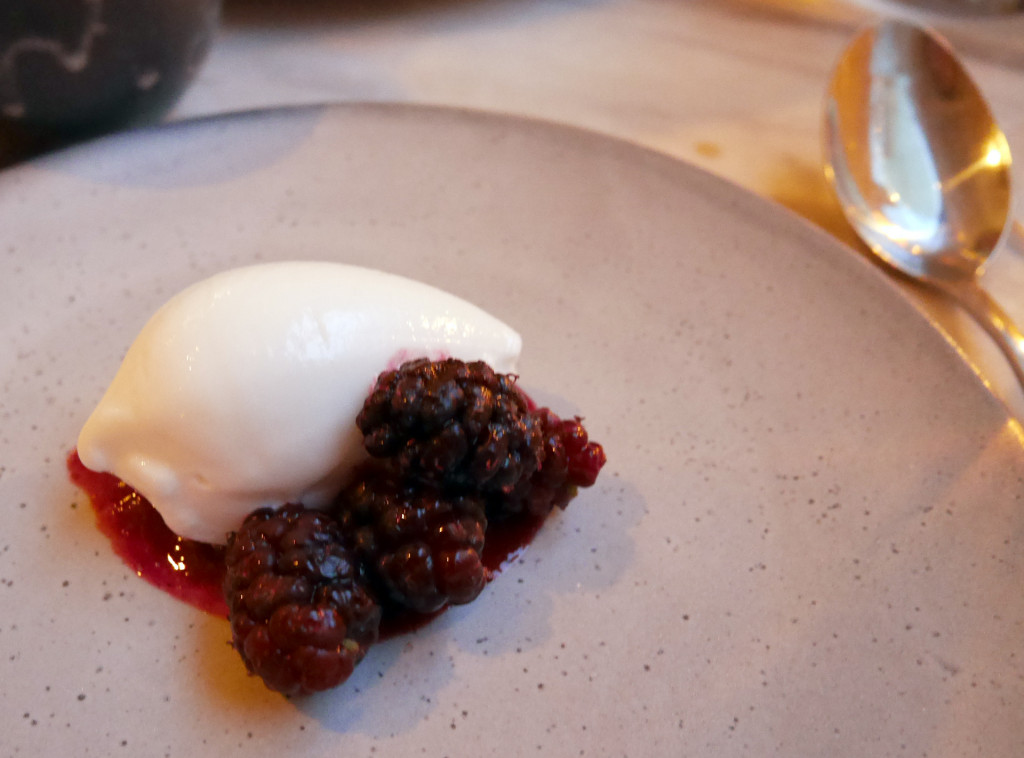 While the early season blackberries were delicious, I think I would have been more satisfied if the puddings had been a bit more varied.

As we were a bit late in starting, we finished off our meal with petit fours at the bar…something I think they should consider making a more regular feature as it was fun to have a change of scene.  The knowledgeable and friendly bartenders made us some great cocktails (including a particularly brilliant espresso martini) and I would definitely head back to the bar even if I wasn’t visiting the restaurant.